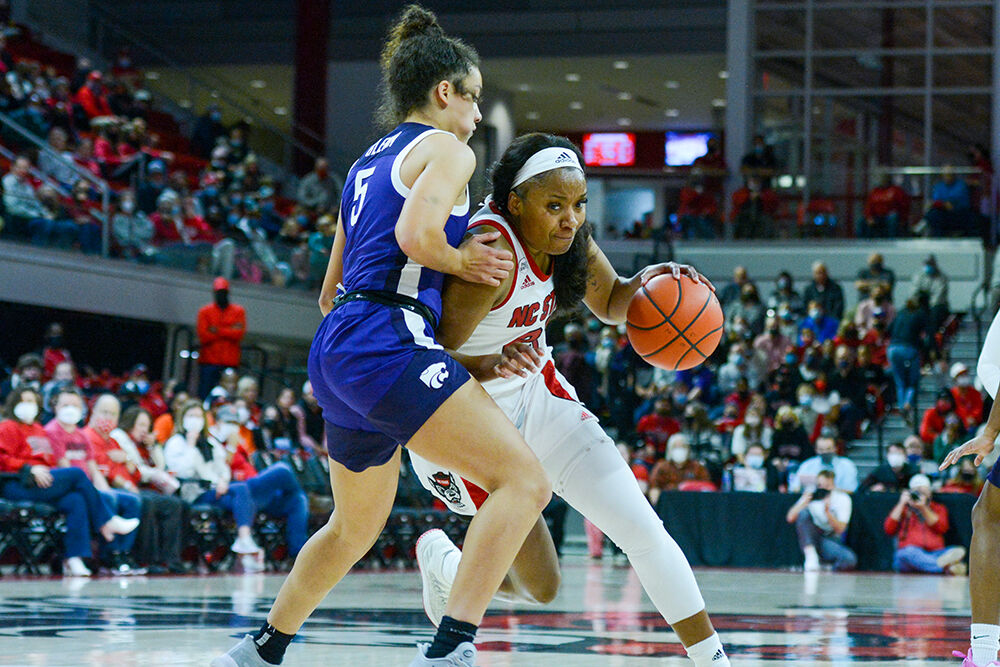 Graduate student forward Kayla Jones moves around the block in the game against Kansas State on Friday, Nov. 19, 2021 in Reynolds Coliseum. Jones contributed to the Wolfpack with 12 points and 6 rebounds. NC State beat Kansas State 90-69. 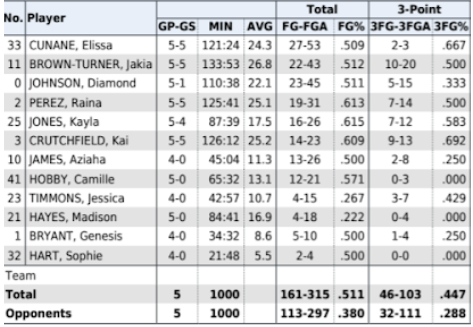 The No. 5 NC State women’s basketball team has completed the daunting task of facing No. 1 South Carolina and has just finished up a home stretch in the Preseason WNIT. Though escaping that trial with a 5-0 record would’ve been ideal, a 4-1 standing is nothing to sneeze at. Let’s take a look at how the team performed in its first five games.

It may not be sustainable, and NC State did shoot poorly against South Carolina’s higher level of competition, but the Wolfpack’s shooting numbers on the season are astronomical. In five games, NC State is connecting at a 51.1% rate from the floor and 44.7% from 3.

Just look at these numbers; they’re outright unreal. This is all happening while the statistically best shooter from last season, sophomore guard Diamond Johnson, who shot 45.5% from 3 last season at Rutgers, is connecting at a below-average 33.3% mark.

These numbers probably aren’t going to remain at status quo, but it’s highly encouraging that the Wolfpack has gotten its stroke from deep back after a 5 of 18 showing against the Gamecocks.

Last season at Mississippi State, sophomore guard Madison Hayes held averages of 4.7 points and 4.7 boards per game, along with seasonal totals of 20 assists and eight steals. Those numbers don’t exactly paint the picture of the kind of hustler and the level of skill that Hayes plays at. Sure, Hayes’ shooting numbers aren’t pretty but, as we’ve established, it’s not like NC State is lacking in the shooting department.

Where Hayes pops off the most is through her defensive impact and all-around energy. Despite an average of 16.9 minutes of play per game, Hayes is averaging three points and four rebounds per game. Her four rebounds per game are already fourth on the team, which is impressive given her limited playing time. But if you expand the roster’s numbers to a per-40 metric, she ranks fourth on the team in rebounds at 9.5 behind centers senior Elissa Cunane and junior Camille Hobby, along with a surprise in Johnson, who is 5-foot-5.

Hayes also has seven assists, her 3.3 per 40 also rank fourth, and she has four steals compared to just three turnovers. Those numbers are nearly half of her seasonal totals last year, which she has accumulated through just five games and in much less playing time.

I’m a huge fan of this sequence in particular from Hayes. First, she’s in a great defensive stance, playing with some anticipation and being active with her hands against Zia Cooke. Her defense forces Cooke into a double team and though Destiny Littleton ends up getting an open shot off, Hayes is able to make her presence felt by rushing the loose ball and forcing a South Carolina turnover.

We all know the kind of basketball player that Diamond Johnson can be. And while her stats have been impressive on paper, it’s important to consider that the Pack’s games against top-25 competition is more indicative of the team than its recent string of wins against teams like Wofford, Florida, Towson and Kansas State.

Thankfully, NC State got to take on South Carolina in its very first game of the season, giving a good idea of what to expect. While many players would probably like to forget that game, Johnson in particular struggled. The usually high-scoring guard shot just 2 of 12 from the field and had as many turnovers and fouls combined as she had points.

It wasn’t just an ugly outing for Johnson on the offensive side of the ball, she struggled defensively too. Destanni Henderson was Johnson’s primary matchup and she finished the contest with 14 points, five assists and two steals.

Here, Johnson gets into a good defensive stance and drives Henderson to the baseline but ends up biting on a fake that lets Henderson get underneath her with a clear path to the basket.

On a play shortly after, a similar story plays out. Johnson is just a half-second too slow getting back on defense after an offensive board by the Gamecocks. She gets caught under the basket and it allows Henderson to drive right through her.

It’d be remiss to say that Johnson is anything other than a bucket-getter after her stellar first collegiate season. Technician has covered that level of play extensively. Johnson made several positive strides against lesser teams following the clash with South Carolina. For one, her 5.4 rebounds per game rank second on the team. She also ranks first in assists and second in steals per game, though she is also second in turnovers per game.

However, in order for this team to take the next jump, Johnson is going to need to continue the level of play she displayed in the Preseason WNIT into tougher competition, with No. 3 Maryland and No. 4 Indiana looming on the horizon.

Loss to South Carolina better than it seems

Plenty of Wolfpack fans were expecting a victory over South Carolina after trumping the top dog last season in Columbia, South Carolina. Those fans left Reynolds Coliseum with a bitter taste in their mouths after a poor offensive showing by the Pack. However, as the season has continued, NC State fans should be excited by the team’s performance against the ‘Cocks.

South Carolina has only played in six games thus far, but NC State held it to its lowest point total of the season. The Gamecocks are by far and away the best team in college basketball, so losing by just nine points and staying in the game for as long as it did isn’t a bad look for the Pack.

This is further supported by the fact that South Carolina obliterated both No. 9 Oregon and No. 2 Connecticut in back-to-back games. USC forward Aliyah Boston had 38 combined points in those two wins, while NC State held her to just eight points on 3 of 8 shooting.

Head coach Wes Moore and the rest of the Pack will never be satisfied with a loss, but it isn’t like there were no positive takeaways from that game. There are plenty of new faces still figuring out how to mesh with the team, graduate forward Kayla Jones isn’t 100% healthy and reigning Co-Sixth Player of the Year junior forward Jada Boyd still isn’t healthy. This team was far from what it’s going to look like by the end of the season and it still gave the ‘Cocks a hell of a showing and demolished every team in the Preseason WNIT.

The Pack will get a chance to prove it belongs in the top five when it takes on No. 3 Maryland in the Bahamas on Thanksgiving. Herhoopstats.com gives NC State a 50.7% chance to come away with the win. Tip is set for 11 a.m.