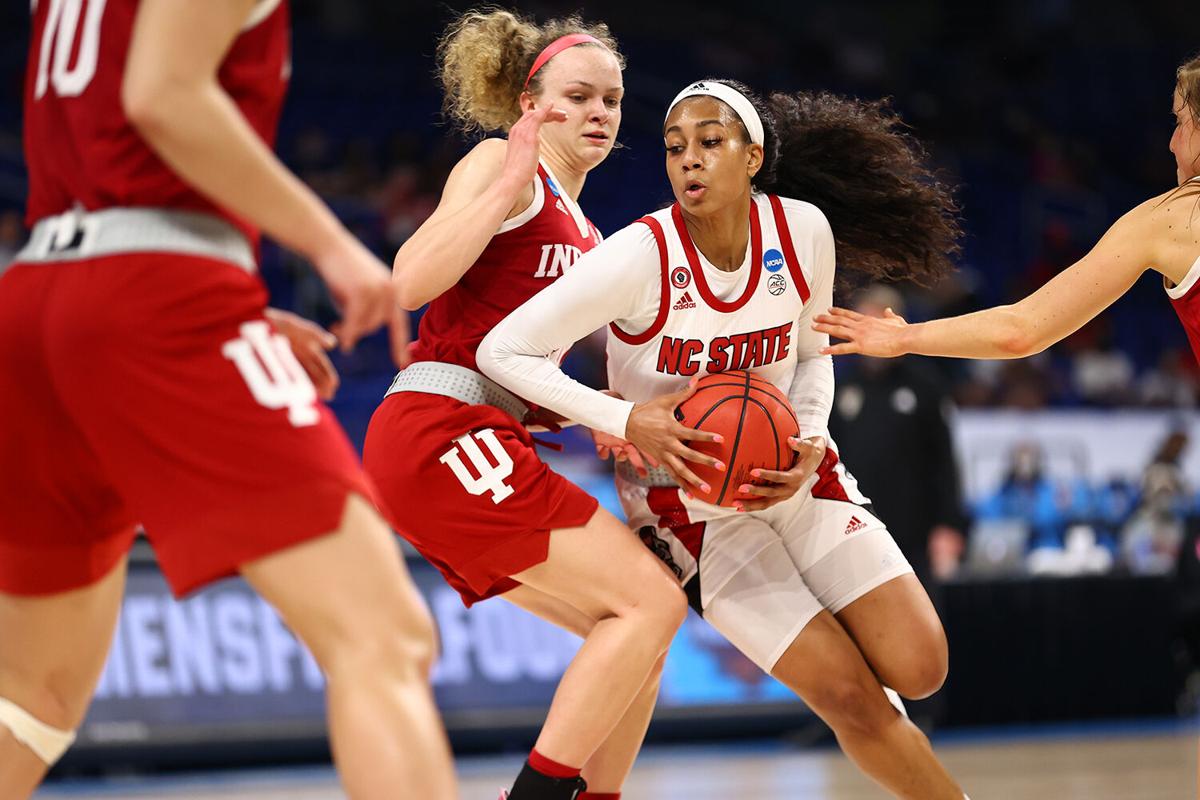 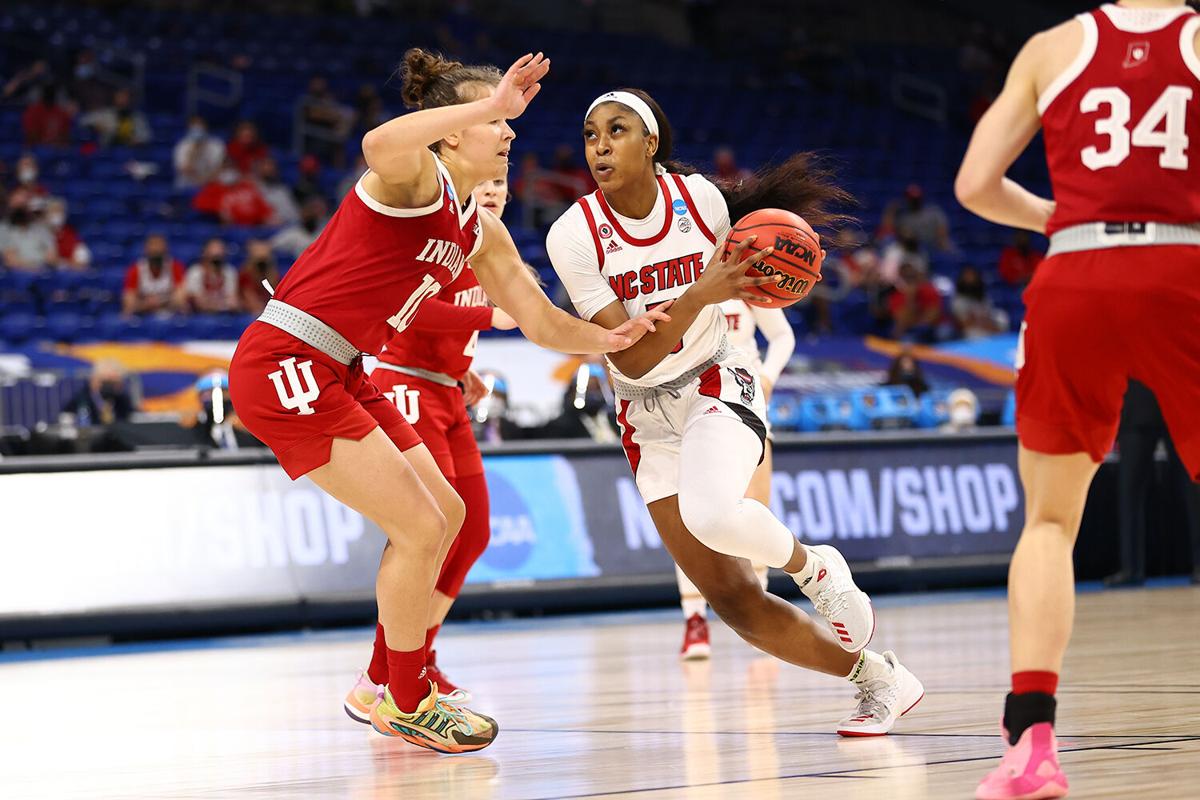 The NC State women’s basketball team was upset by the Indiana Hoosiers in the Sweet 16 of the NCAA Tournament Saturday night, falling 73-70.

After going down by as much as 14, the Wolfpack came back to cut fourth-seeded Indiana’s lead to two with just seconds on the clock. The Pack got Indiana’s Ali Patberg to split free throws at the end of the game but failed to get a good look from deep, faltering in the final seconds of the contest.

“I'm proud of our players,” said head coach Wes Moore. “All they've done this year, all they've gone through. I'm proud of them today, especially, too, the way they competed and fought and got back in the game. We're going to get over the hump. We've got to get over the hump. So got to keep putting ourselves in this position, then hopefully close the deal and take advantage of it.”

Following an explosive 24-15 third quarter from Indiana, the Pack went down big with under two minutes remaining before the fourth quarter. Down 10 points with four and a half minutes left in the game, Moore’s Wolfpack did as it had all season, coming to within two points with just 13 seconds left. Graduate guard Raina Perez and sophomore forward Jada Boyd had huge buckets down the stretch, hitting clutch shot after clutch shot.

Unfortunately, the Pack’s errors proved to be too much, and Moore called the team’s last timeout, taking away the team’s last shot to get a good look by advancing the ball and completing the comeback.

“We were down 14 or so, came back, made it a two-point game,” Moore said. “I regret [it]; I messed up and called a timeout there [with] about 13 seconds left, I shouldn't have done that. I should have saved that. We maybe would have got a little better look that last possession.”

Despite shooting the ball well for the entire game, NC State had too many little things add up over time. The Pack finished the game with 17 turnovers, far more than its season average of 12.8 and had zero individual offensive boards, managing to get just three as a team. Furthermore, Indiana played stellar defense, the Pack was without senior forward Kayla Jones and Boyd was in foul trouble all game, further diminishing the team’s chances.

“Again, I'm proud of them, the way they fought because we did have players out of position and that sort of thing,” Moore said. “Just trying to piece it together a little bit. Kayla Jones, first team All-ACC, a four-year senior, somebody that we rely on heavily. Again, without her in there, Jada Boyd unfortunately got in some foul trouble. That hurt us there as far as what we would have liked to have done.”

NC State got out to a fiery start, jumping out to a 7-0 lead with Boyd leading the charge. Boyd had all seven of the Pack’s first points. The entirety of the first half was a stretch of runs, with the Pack going on that 7-0 run, then Indiana seeing its own 9-0 run before NC State went on a 13-2 run near the end of the first quarter.

Boyd had a stellar game, finishing with 18 points for the third time in three NCAA tourney games, but her foul trouble kept her from making more of an impact. Perez and senior guard Kai Crutchfield also had strong performances, with Perez adding 17 points and the pair combining to shoot 10 of 13 from the floor.

After Indiana got out to its 9-0 run in the first, the rest of the Pack turned the heat up. Junior center Elissa Cunane had five points, four rebounds and three assists in the first, splashing in a 3-pointer alongside Crutchfield and sophomore wing Jakia Brown-Turner.

Cunane finished the game with 15 points, 12 rebounds and five assists but struggled with Indiana’s fierce double team, coughing up five turnovers. Brown-Turner also struggled, shooting 3 of 13 from the floor in the game.

“They were just playing hard,” Cunane said. “They wanted to win. They were playing like it. We definitely had some turnovers. I know I had multiple turnovers that were unforced. I could have taken care of the ball a lot better. Turnovers were definitely a big reason why they won this game.”

After going up 20-11 late in the first, the Pack allowed the Hoosiers to get back into the game with a 13-2 run, tying the game at 24 apiece and keeping the score close at the end of the half.

After halftime, Indiana absolutely took over in a quarter NC State is usually dominant in. In the tournament, the Pack was a plus-26 in third quarters heading into this game, but the Hoosiers took a quick 13-2 run right out of the half.

That domination by Indiana continued throughout the third, as the team got 13 combined points from Patberg and Grace Berger in the quarter. That duo ended the game with 17 and 12 points, respectively. At the end of the third, Indiana led the Pack 58-48.

In the fourth quarter, the Wolfpack took advantage of a scoring drought by Indiana that lasted nearly three minutes in order to cut the lead to single digits. Mackenzie Holmes, who gave the Pack issues all afternoon and had 16 points, fouled out in the fourth quarter, giving NC State a perfect opportunity to get Cunane going.

The Pack got so close to making the impossible happen once more this season, cutting the lead to just two points with 13 seconds remaining in regulation.

“I never doubted that we could win that game until the buzzer went off,” Cunane said. “I think the team never doubted each other, too. We all had each other's backs in the huddles, knowing we could come back; we've done it multiple times this season. That has been the story. We didn't start off too hot in any of the games in the NCAA Tournament; I don't think the ACC Tournament we started off hot. We knew we were going to come back in the second half. We made a run for it. It just fell short. But never once doubted this team.”

Unfortunately for NC State, Indiana was able to hold on and took advantage of a frantic Wolfpack team looking to complete a comeback without a timeout. With the loss, NC State becomes the first No. 1 seed to be eliminated from the NCAA Tournament.

“Yeah, it wasn't like exactly the look we planned for,” Cunane said. “But I did get a [look] down low, which is what Coach Moore drew up for me, to get the ball down low. I just didn't execute it. It was a good look. They were doubling all game. I had a little double there. I could have finished that. So it was the look we were looking for. I got it inside, just was unable to execute that.”

Despite the outcome, the Pack had quite the season, beating two top-ranked teams in the same year. On the plus side, Moore got a chance to play his underclassmen, beautifully setting up the future of the program. Boyd’s 54 points in three tourney games were phenomenal, and the Pack will get a chance to run it back with the same corps next season, with each player having the opportunity for an extra year of eligibility.

“It's really easy to be disappointed in this moment,” Cunane said. “I think we'll be disappointed forever. We could have gone further than what we did. But looking back on it, just what this team has done this year despite all the differences, I mean, getting to the NCAA Tournament, making history as No. 1 seed, back-to-back ACC champions, there's a lot to look back on. Just knowing the support staff, the coaches, everybody that worked hard, didn't see their family, their kids, anyone, just for us to play basketball this season. It's really amazing.”

I'm Tristan Tucker, assistant sports editor in the class of 2022 studying Communication Media and Statistics. I joined Technician in Fall 2018 and am a credentialed NBA writer for Basketball Insiders and SB Nation. I also work at PackTV.