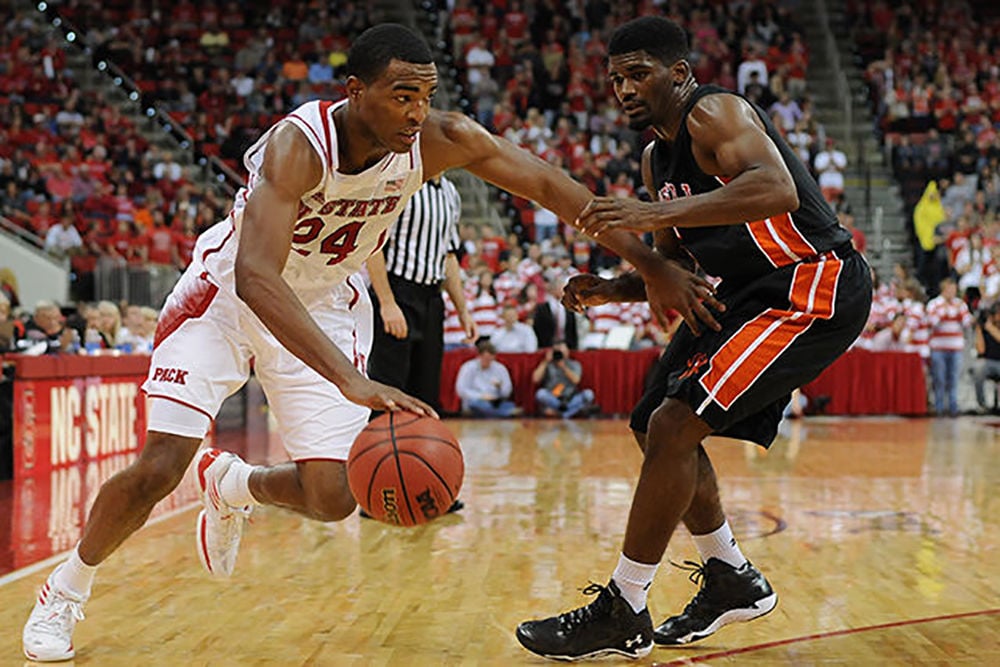 Former NC State forward T.J. Warren drives from the outside to the basket against Campbell on Nov. 16, 2013. Warren had 23 points and three rebounds in the Wolfpack’s 81-66 win over the Camels at PNC Arena. 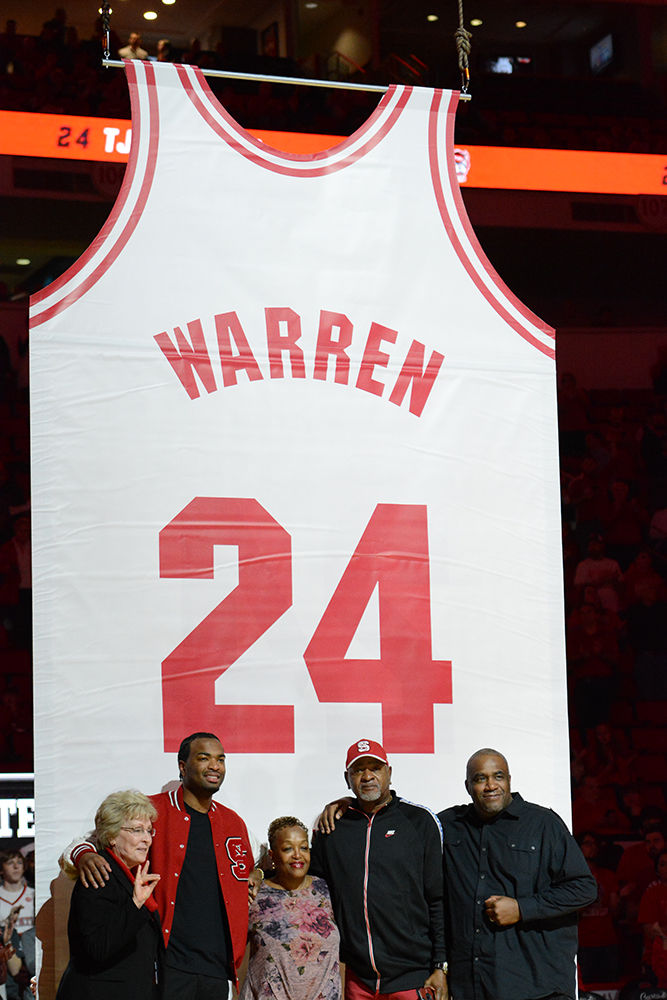 Former forward T.J. Warren poses for a photo with his family and Director of Athletics Debbie Yow in front of his honored jersey before NC State’s game against Wake Forest on Sunday, Feb. 25 at PNC Arena. Warren wore number 24 for the Wolfpack and played for the team from 2012-2014. He won ACC Player of the Year and second-team All-American in 2014, along with many other honors.

Former NC State forward T.J. Warren drives from the outside to the basket against Campbell on Nov. 16, 2013. Warren had 23 points and three rebounds in the Wolfpack’s 81-66 win over the Camels at PNC Arena.

Former forward T.J. Warren poses for a photo with his family and Director of Athletics Debbie Yow in front of his honored jersey before NC State’s game against Wake Forest on Sunday, Feb. 25 at PNC Arena. Warren wore number 24 for the Wolfpack and played for the team from 2012-2014. He won ACC Player of the Year and second-team All-American in 2014, along with many other honors.

Fans of the NC State Wolfpack and Indiana Pacers alike will always remember better days when their respective teams were led by the offensive force that is T.J. Warren. The 6-foot-8, 220-pound small forward wreaked havoc on the ACC during his time at NC State and began to make a real name for himself in the NBA bubble last season.

The Pacers thrived behind Warren’s heightened play. Unfortunately, a season-ending foot injury sidebarred any hope of a return to that peak bubble form. While many believed that his 26.6 points, 6.3 rebounds and 2.4 assists per game stat line from the 10 games played in Disney World wasn’t sustainable, it was certainly a bright spot in the hearts of Pacers fans.

For those who never saw Warren play at NC State, his stat line from the bubble may have seemed uncharacteristic of the then six-year NBA veteran. Wolfpack fans, however, are perhaps the most understanding of the pure talent that Warren possesses. None of them would be quick to forget his miraculous 2013-14 season, when he took the college game by storm.

Before that magical 2013-14 run, Warren got off to a hot start at NC State. Coming into the school’s program as the No. 23 prospect in both Rivals and ESPN’s 2012 classes, the No. 6 small forward recruit in the country made an immediate impact on the Wolfpack roster.

Appearing in all 35 games for the Pack in his first year, making 14 starts, Warren earned a spot on the 2012-13 ACC All-Freshman team. His case for such an honor was made with 12.1 points, 4.2 rebounds and 1.2 steals per game while shooting 62.2% from the floor and a 51.9% clip from deep. That 62.2% mark was high enough to place him second on the school’s all-time list for field goal percentage in a single season among qualifying players, finishing behind Kevin Thompson’s 62.4% rate in 1992.

It was clear that Warren wasn’t lacking in the talent department following his first year in the red and white, but the jump he made from his first to his second year is one of the most memorable glow-ups in recent college basketball history. In the 2013-14 season, Warren became the primary scoring option for the program, morphing into more of a volume shooter and shot creator.

The change in his role came with a massive change in his stats, more than doubling his point output and almost doing the same on the boards. In his sophomore year, Warren averaged an ACC-best 24.9 points along with 7.1 rebounds per game. Such a stat line was enough to earn him the 2014 ACC Player of the Year award, selected by both coaches and media, as well as second team All-American honors.

During this historic season by NC State standards, Warren became just the third player in conference history to lead the ACC in both scoring and field goal percentage on a five field goal per game minimum. It is also hard to forget about his two game stretch where he became the second player in school history to record back-to-back 40-point games, with 41 against Pitt and 42 against Boston College just six days later. If his freshman season wasn’t enough to sell NBA scouts on Warren’s ability, his second year was more than enough to send the young star on his way to the league.

After going 14th overall to the Phoenix Suns in the 2014 NBA Draft, Warren didn’t quite pan out to the potential many believed that he had coming out of such a remarkable college career. In his five years with the Suns, he never passed the 20 points-per-game mark.

A three-team trade sent Warren on his way to Indiana on a young roster with a lot to prove. His memorable performance in the bubble came in his first season with the Pacers and could be an indicator of what is to come when he returns from injury.

Indiana managed a ninth-place finish in the Eastern Conference of the NBA this year, earning it a spot in the brand new Play-In Tournament. Despite making it past the Charlotte Hornets in the first round of the inaugural event, the Pacers fell to the Washington Wizards and failed to make it to the playoffs. While it can’t be known for sure if Warren’s presence would’ve changed that outcome, a healthy Warren couldn’t have hurt.

Regardless of whether he ever lives up to the hype that surrounded him coming out of college, Warren will always live on in the hearts of Wolfpack fans worldwide. His sophomore year was one for the NC State record books and is certainly deserving of remembrance.

From fan favorites to record-setting seasons, our writers dive into the NC State careers of some of their favorite student-athletes from years past.