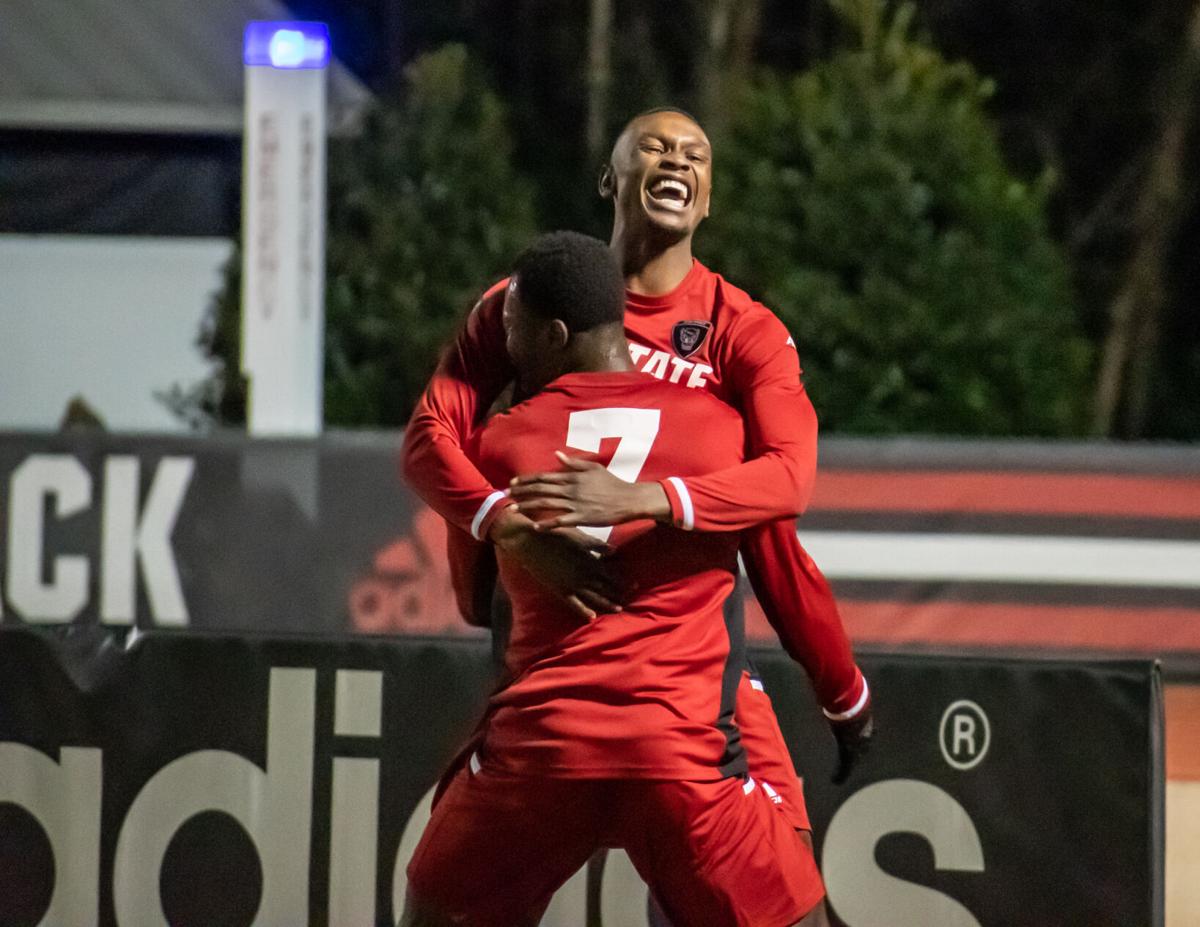 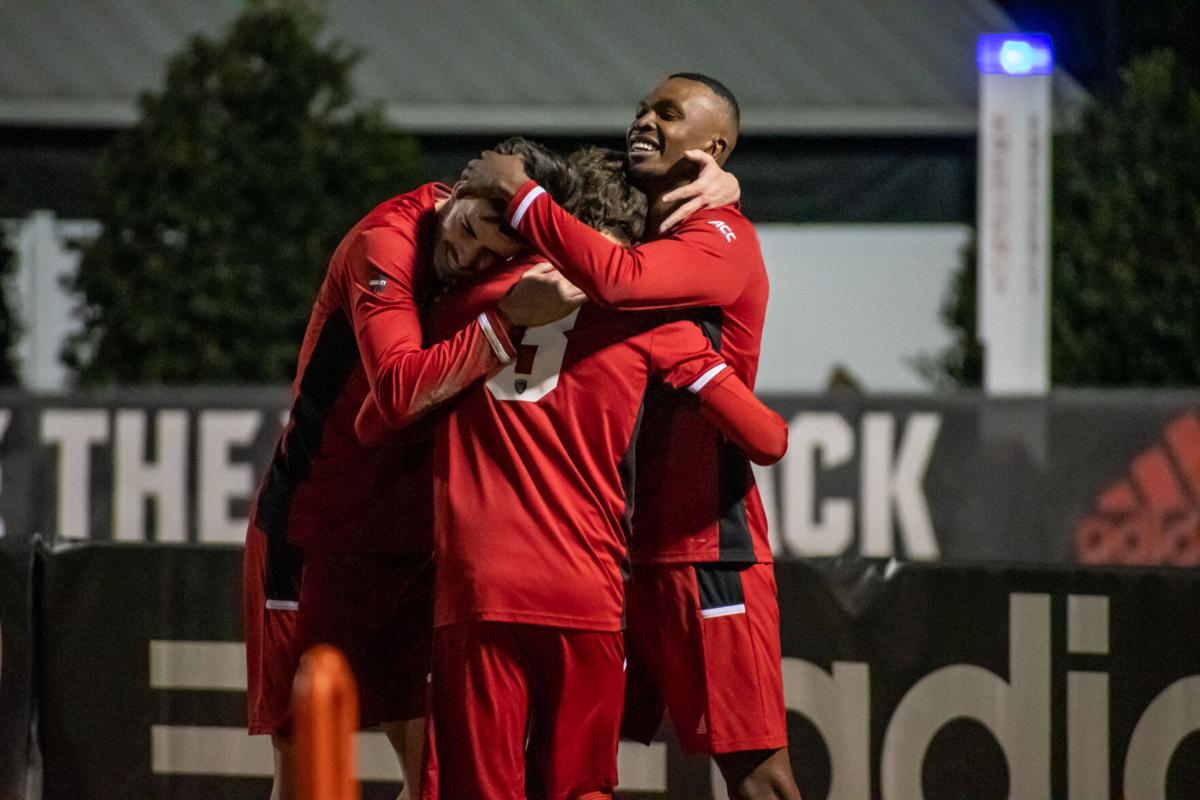 Junior forward Kuda Muskwe celebrates after his goal against the UAB Blazers on Saturday, Feb. 20, 2021 in Dail Soccer Stadium. The Wolfpack beat the Blazers 2-0. 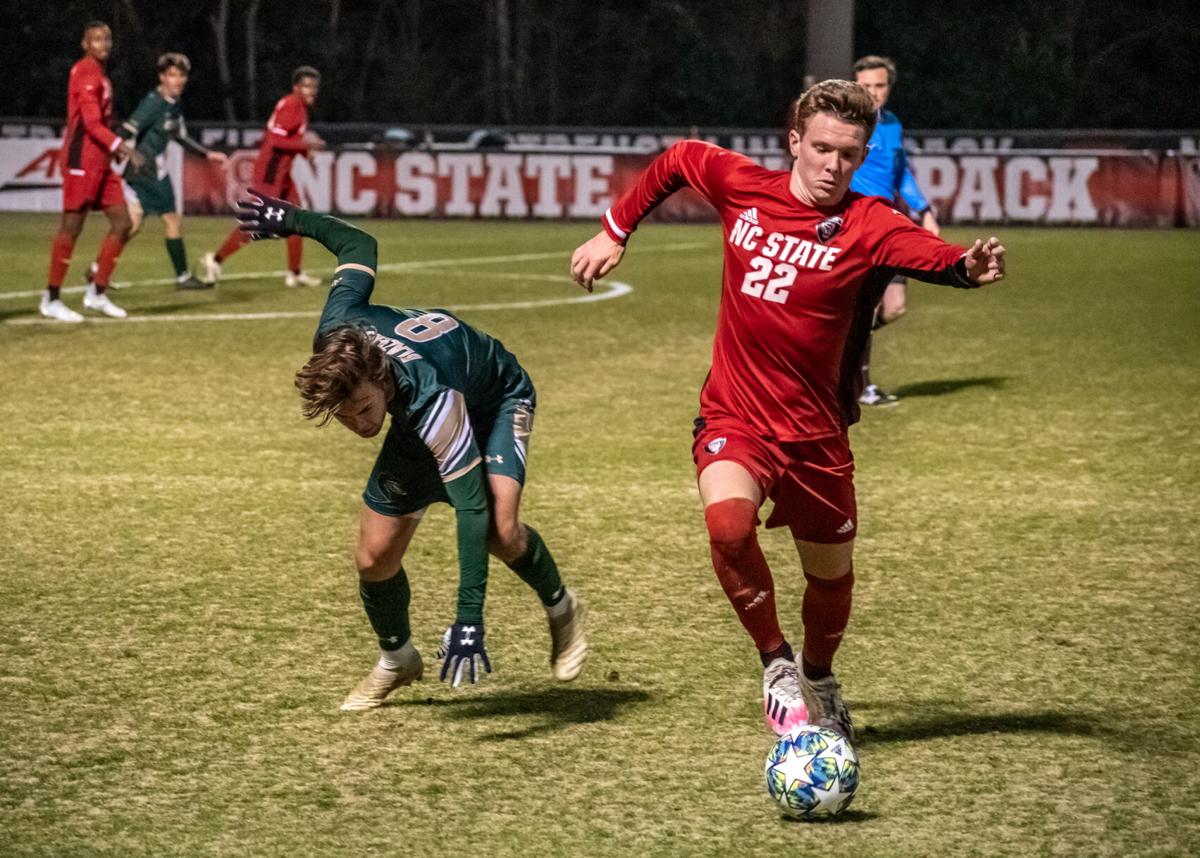 Junior forward Kuda Muskwe celebrates after his goal against the UAB Blazers on Saturday, Feb. 20, 2021 in Dail Soccer Stadium. The Wolfpack beat the Blazers 2-0.

The NC State men’s soccer team earned its first win of the season by defeating the UAB Blazers 2-0 at Dail Soccer Field on Saturday, Feb 20. The match was hotly contested despite being a shutout, as the two teams combined for 19 fouls and five yellow cards.

The Blazers hit the ground running with aggressive attack and defense in the first 10 minutes, but the Pack repelled each of them and eventually made some chances of its own.

“I thought we did a good job in terms of not letting them get in behind,” said head coach George Kiefer. “I think there were a couple of situations where our heart rate was fast, it was more in terms of a decision or in terms of a mental mistake but I don’t think [UAB] did anything to really break us down with multiple passes and things like that. I was pleased with that.”

The Pack was unable to connect on a pass across the face of goal on two separate occasions, but the third time was the charm when NC State earned a corner kick in the 13th minute. After UAB failed to clear, junior forward Ivy Brisma gobbled up a loose ball around the penalty spot and took it toward the right goal post before slotting it into the left side of the net, putting the Pack up 1-0.

It didn’t take long for the Blazers to get back on the offensive. Just a minute after Brisma’s goal, redshirt junior goalkeeper Leon Krapf stopped a long shot from tying the score as he dove to his right and caught the ball by his fingertips.

Brisma made another contribution to the score line in the 25th minute when he delivered a sharp cross from the right side to junior forward Kuda Muskwe, who arrived in the middle to execute a clinical finish, doubling NC State’s advantage to 2-0.

“He’s somebody I’ve been playing with for a long time, since freshman year, and we have a pretty good relationship,” Brisma said. “We’re always staying back and putting in work together after training.”

Brisma once again found an opportunity to score not long after his assist when he pounced on an errant backward pass to UAB keeper Seth Torman. Brisma deflected Torman’s clearance right back toward the goal, but the ball dribbled off the near post and out for a goal kick.

It wasn’t all sunny side up for the Philadelphia Union Academy player though. After losing possession while on the attack late in the first half, Brisma made a late tackle on Blazers midfielder Joseph Buete, which led to UAB defender Owen Travis shoving Brisma behind the play. Brisma reciprocated the act and both players were charged with a yellow card.

“I lost the ball and tried to recover it, and tried to make a tackle,” Brisma said. “The tackle wasn’t the cleanest, but I was on the ground and the older UAB player felt like the tackle was too dirty. He got in my face and shoved me to the ground, but I should’ve kept my composure.”

The second half immediately saw a continuation of the rough-and-tumble play, as junior defender Pepe Garcia made a harsh tackle in the 53rd minute. This foul earned him a yellow card, the second of the match for the Wolfpack.

Keeping with the trend set by Garcia, the latter half was aggressively defensive. Sophomore defender Kendall Edwards was a stalwart of the Wolfpack’s back line all game, but his clearances were especially timely in the later stages of the match as the Blazers turned the offensive pressure up to 11.

“I was just talking with my staff and we thought he popped up in the right areas,” Kiefer said. “He’s so athletic and made good decisions on the ball. I was pleased with how Kendall played.”

Edwards also earned a yellow for himself in the 74th minute. After NC State was called for a hand ball after taking a corner, Edwards picked up the ball and carried it for a few yards before ultimately relenting and tossing it back to UAB.

Despite the increased pressure from UAB, the Pack saw the match through to the end and secured the 2-0 victory. To win the first game of the spring after a winless fall season was an important result for this team.

“I am very proud and happy of the guys because we’ve been wanting this win for a long time,” Brisma said.

The Wolfpack will look to make this win a trend when it goes on the road against the VCU Rams on Wednesday, Feb 24. The game will kick off at 6 p.m.

Wolfpack baseball looks to continue winning ways against No. 16 Pitt