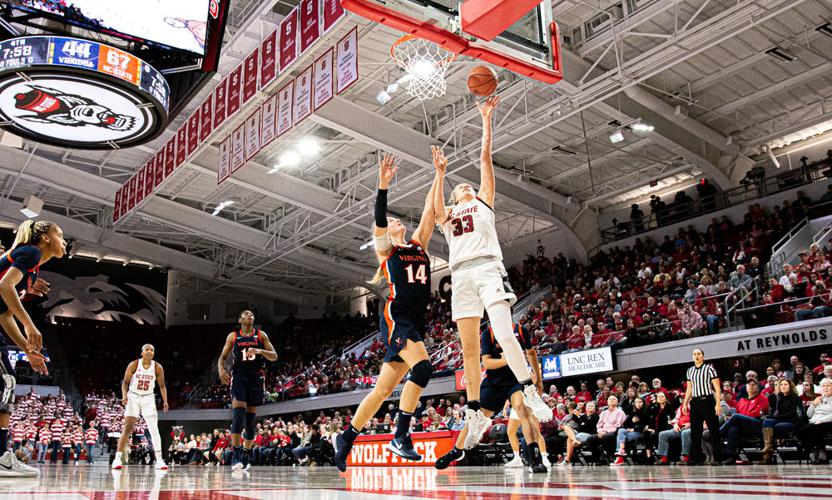 Just a few days after an emotional come-from-behind win over Virginia Tech, the No. 9 NC State women’s basketball team had no trouble taking down the Virginia Cavaliers 80-60 on Sunday afternoon at Reynolds Coliseum.

Another strong performance by sophomore center Elissa Cunane, and hot shooting from freshman wing Jakia Brown-Turner and senior guard Aislinn Konig overpowered the Cavaliers (5-9, 0-3 ACC) and kept the Wolfpack (14-0, 3-0 ACC) undefeated and atop the ACC standings as conference play picks up.

“You ask ‘How do you have a streak like this?’”, Moore said. “Well you play defense and you rebound cause you’re going to have some games where you don’t shoot well and you’re going to have to win on the other end of the floor … One game at a time. We don’t talk about the streak, I don’t think I’ve mentioned it at all this year.”

Brown-Turner started strong with six of the Pack’s first eight points via two 3-pointers and Cunane dominated inside, recording six points and four rebounds in the first quarter as she continued her excellent start to the new year.

“We want to play inside out, we want to get [Cunane] touches,” Moore said. “We usually have four people around her that are really good 3-point shooters and so if you decide to double or help, we got people that can make you pay for doing that … I thought in the second half, she did a great job in recognizing when the double was coming and maybe when it wasn’t there or didn’t get there in time and she was able to score 1-on-1.”

After struggling with her 3-point shot early in the season, Konig has caught fire from downtown of late, and that continued this afternoon. She hit two 3s in the first quarter, the latter of which put her over the 1,000 career points mark.

NC State ended the first quarter up 23-17 with scoring contributions from all five starters. It was much of the same in the second quarter as Cunane upped her total to 11 points and six rebounds. Although the half ended with a 38-28 NC State lead, it could’ve been more as the Pack dominated the half from start to finish.

At the half, seven of the eight NC State athletes to see the floor had scored with Cunane leading the way. Junior guard Kai Crutchfield only had two points at the break but she led both teams with five assists and had the lone Pack steal.

The third quarter started a little slower for NC State as Virginia wouldn’t go away, but only getting as close as nine points. After the teams traded buckets for a while, the Wolfpack went on an 11-0 run with Cunane leading the way and Brown-Turner nailing a 3-pointer to force a Cavaliers’ timeout.

“We got [Cunane the ball, and she was scoring,” Moore said. “And then when they took that away, we knocked down some 3s and got some momentum. We ran a little bit, we want to run, try and score in transition and get some buckets before the D can get set.”

Almost all of Virginia’s production came from guards Jocelyn Willoughby and Dominique Toussaint, who scored 25 and 15, respectively. Willoughby scored 15 of Virginia’s 28 first-half points and besides those two, the Cavaliers had nobody over six points.

NC State outscored Virginia 24-15 in the third quarter to take a 62-42 lead into the final frame. Early in the fourth quarter, Cunane collected her 10th rebound to secure her eighth double-double in 14 games this season. She ended the game with 26 points and 10 rebounds, going 8 for 11 from the floor and 10 for 10 from the free-throw line.

As it has in almost every game this season, NC State outrebounded its opponent, this time by a margin of 13.

The Wolfpack will be back in action Thursday, Jan. 9, at 7 p.m. when it takes on rival North Carolina at Carmichael Arena in Chapel Hill. The game will be broadcast live on the Regional Sports Network.

Aislinn Konig has long been a fan-favorite of NC State fans. With a catchy nickname, “Ace,” and a handle nearly as smooth as her record-setting 3-point shot, the senior guard never fails to receive the loudest applause in pregame introductions.

By the numbers: Women’s basketball vs. Virginia

NC State women’s basketball dominated the Virginia Cavaliers on Sunday afternoon in Reynolds Coliseum for its 14th straight win since the start of the season. While there were a lot of great performances, here are some numbers that won’t appear in the basic box score.