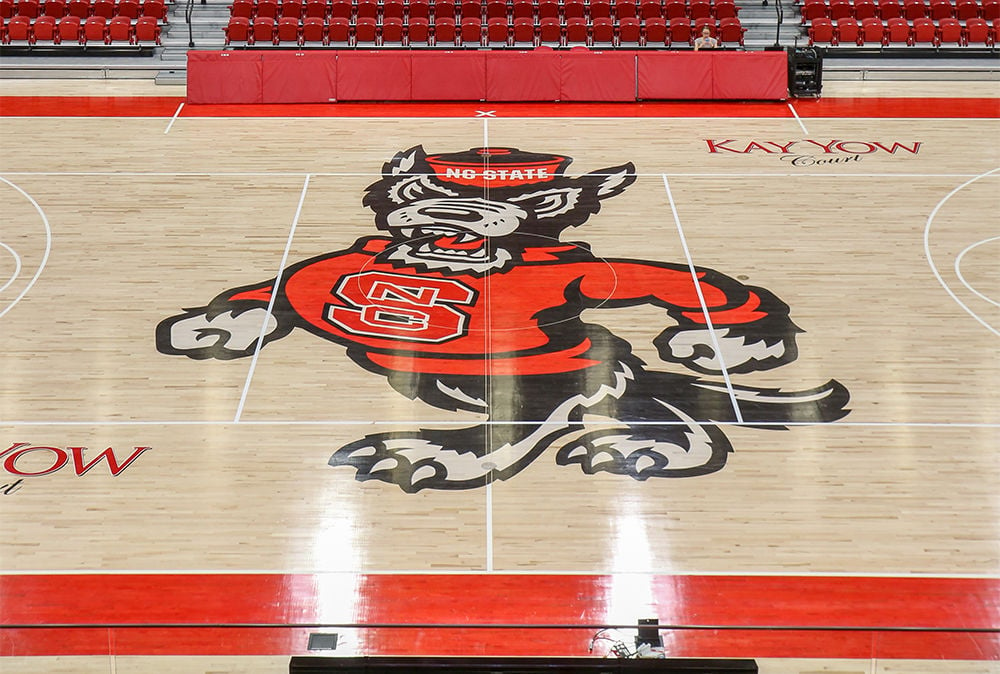 After renovation, the new court on Reynolds Coliseum features a large Mr. Wuf at center court and a brand new score board along with new courtside seats. Reynolds, which will now hold just over 5000 fans for games, or around 6000 for concerts. 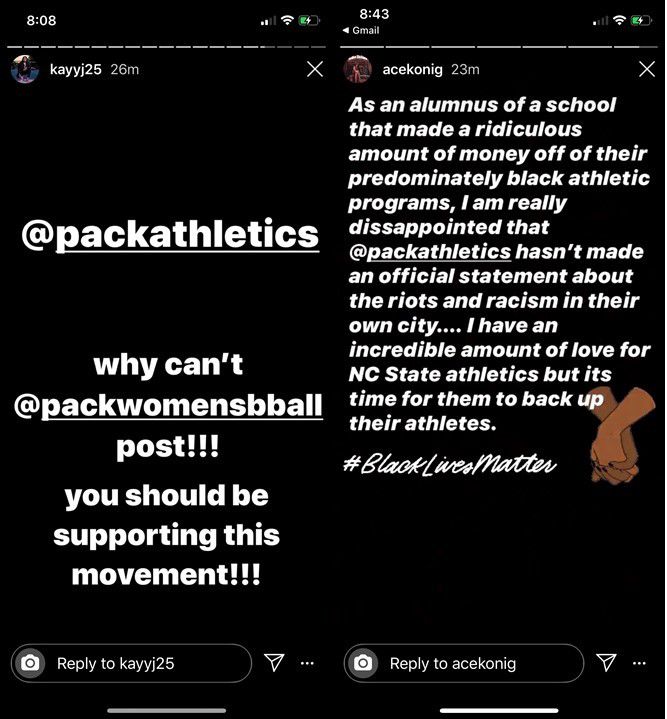 On Tuesday, June 2, accounts across social media posted blacked out photos and refrained from posting anything else as a part of #BlackOutTuesday. The movement’s purpose was to raise awareness for the ongoing Black Lives Matter protests across America and to prevent self-promotion across the board, reverting attention to petitions and ways to help.

However, the NC State Athletics account and team accounts were noticeably not participating until several members of the women’s basketball team took notice and, both behind the scenes and on social media, pushed for Athletics to stand up for and support not only their black student-athletes, but also all black NC State students.

“They had black out Tuesday last Tuesday, and I saw [Aisha Sheppard] from Virginia Tech posted on their athletic page about the black out Tuesday so then I went on our page and the other athletics pages here at State and I saw that they didn’t post,” said senior forward Kayla Jones. “I ran to [junior center Jada Rice] and was like ‘What’s going on? Why are they not supporting the movement?’... It was the smallest thing to do to support your African American student-athletes and your students on campus and for them not to do it, it was kind of hurtful.”

Jones, former guard Aislinn Konig and other members of the team took to Instagram, calling for Athletics to do better in their stories, included below. Prior to Jones’s own post, she reposted the #BlackOutTuesday posts from other ACC women’s basketball accounts. Behind the scenes, Jones and Rice began to push for Athletics to join the movement.

“We called coach [assistant head coach Linday Edmonds and we called [assistant coach Erin Batth],” Jones said. “Basically from my understanding, she said our athletics pages could like and retweet but there is nothing really more they could really do. Then coach [Edmonds] said ‘Well we’ll get coach Moore on it’ and I guess he called [Deputy AD Stephanie Menio] and she said it was too late to post it and coach Moore told her that it was better late than never because it wasn’t right. He knew it wasn’t right to see other athletics pages post and then for NC State to not post on their main pages and not be a part of the movement was not it.”

Jones also took to Twitter and Instagram on June 4, explaining that it took her and Rice making multiple phone calls and social media posts to get NC State Athletics to make a #BlackOutTuesday post.

“Part of our responsibility and privilege is to develop student leaders and help them find and share their voice,” Athletics Director Boo Corrigan said in a statement from Pack Athletics through athletics spokesperson Fred Demarest. “That goes both ways and we fully embrace a two-way process, listening, learning and being able to have mature, open dialogue. We’re proud of how our student-athletes continue to express themselves, and we will continue to support and amplify their voices in this conversation.”

For Jones, Athletics has started to change for the better, citing the department cutting ties with CPI after a racist email from its CEO surfaced.

“Most definitely, I feel like they are going harder,” Jones said. “The whole thing with the post was no hatred. You know me and you know Jada, you know it was no hate towards the post, it was just trying to make people accountable for their decision. To not post that was not right. Not only on behalf of African American student-athletes but for students on campus as well. So they’re moving quicker on things, they’re not trying to rush things but they are being aware and they want to be a part of it now. They’re making decisions. I talked to a guy yesterday that said they broke things off with the security people over a comment. They’re actually taking action. It feels good, they’re being aware and taking accountability.”

While Athletics appears to be more active in using its platform to address racism in the country and support its student-athletes, the student-athletes are the ones who are leading the way, and one of the ways they are doing so is the #PackUnited initiative, which was started by the Student-Athlete Advisory Committee (SAAC) on June 1.

“We started it with Isaiah Moore on the football team,” said Rice, who is the marketing and communications chair for SAAC. “But we came up with this hashtag because we wanted to be a part of this movement as athletes at State. It basically goes off of three pillars. The first one is awareness, which is basically just getting it out there, which is what our first post was posting. Everyone holding up a name of someone who has been a victim of police brutality. The second one was education. Basically educating those who are willing to learn and grow with us as well. I think that one thing we need is allies to get change. Of course the last one is action which is basically making those courses of action, to make change. Whether it’s getting people to vote or getting new reforms in whatever instance.”

Since the post from SAAC, teams, players and coaches across NC State Athletics have posted pictures and videos of themselves holding the names of those killed by racism and police brutality.

We want change. Black lives matter.Take a few minutes today to watch and hear this message put together by our players 🖤#PackUnited // #SayTheirNames pic.twitter.com/mubY1BDA8N

With protests ongoing throughout the country, Jones, Rice and many other student-athletes at NC State are doing their part to spread awareness, educate and take action by using their platforms and making sure that NC State does the same.