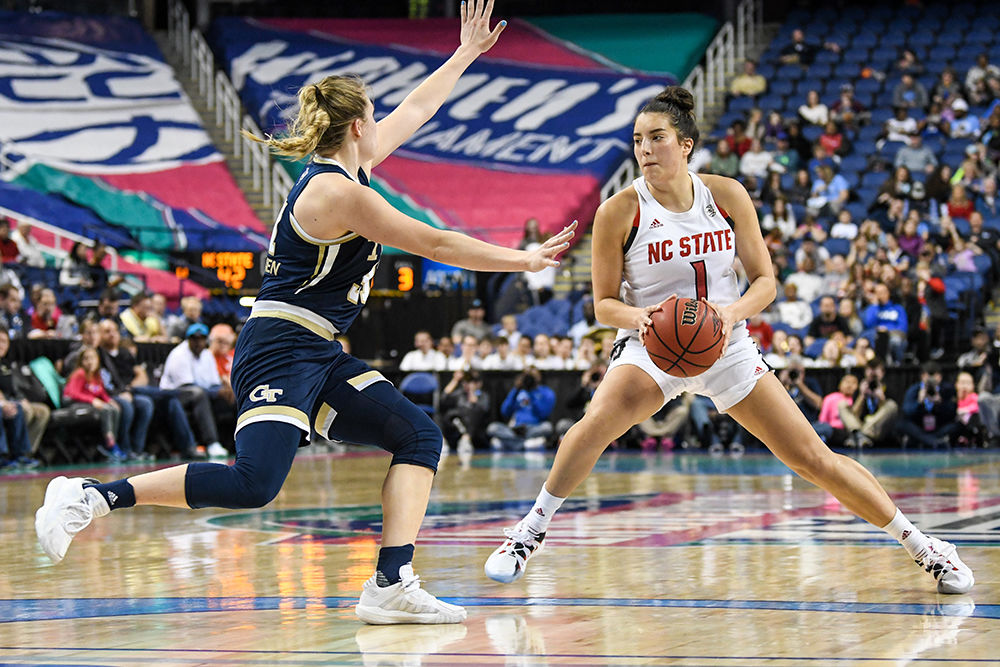 Senior guard Aislinn Konig looks for a pass during the quarterfinal game of the 2020 ACC Women's Tournament versus the Georgia Tech Yellow Jackets on Friday, March 6, 2020 in the Greensboro Coliseum. Konig scored 16 points against Georgia Tech. The Wolfpack beat the Yellow Jackets 57-48. 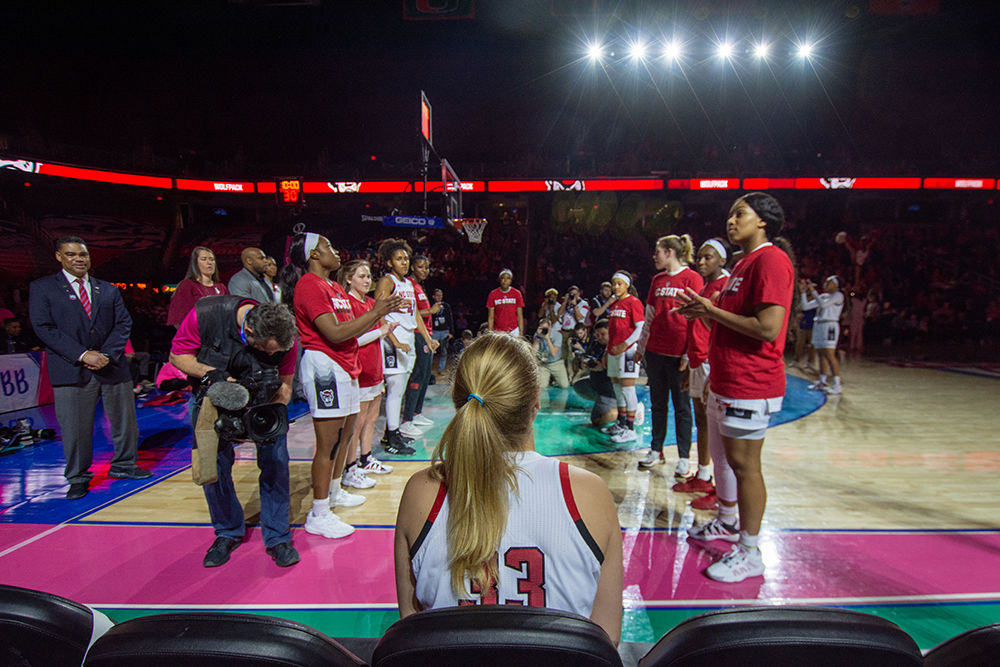 Sophomore center Elissa Cunane waits to be introduced before the quarterfinal game versus the Georgia Tech Yellow Jackets during the 2020 ACC Women's Tournament on Friday, March 6, 2020 in the Greensboro Coliseum. Cunane scored 16 points and 5 rebounds against Georgia Tech. The Wolfpack beat the Yellow Jackets 57-48.

Senior guard Aislinn Konig looks for a pass during the quarterfinal game of the 2020 ACC Women's Tournament versus the Georgia Tech Yellow Jackets on Friday, March 6, 2020 in the Greensboro Coliseum. Konig scored 16 points against Georgia Tech. The Wolfpack beat the Yellow Jackets 57-48.

Sophomore center Elissa Cunane waits to be introduced before the quarterfinal game versus the Georgia Tech Yellow Jackets during the 2020 ACC Women's Tournament on Friday, March 6, 2020 in the Greensboro Coliseum. Cunane scored 16 points and 5 rebounds against Georgia Tech. The Wolfpack beat the Yellow Jackets 57-48.

GREENSBORO — In front of a red-and-white filled Greensboro Coliseum, the No. 10 NC State women’s basketball team survived a tough challenge in the quarterfinals of the ACC Tournament, beating seventh-seed Georgia Tech 57-48 Friday night.

The Wolfpack (26-4, 14-4 ACC) survived an ice-cold opening quarter in its first ACC Tournament game, as a veteran guard and freshman center helped spark a huge second-quarter comeback and stave off the Yellow Jackets (20-11, 10-8 ACC) in an exciting back-and-forth affair.

NC State started the game slowly, trailing 16-7 at the end of the first quarter. Shooting just 3 for 16 from the field in the opening 10 minutes, the Pack managed to get good shots off, but there seemed to be a lid over the net.

“I always think that the team that played the day before has the advantage early in the game, and that was obvious today,” said NC State head coach Wes Moore. “They definitely had an advantage. They looked a lot more comfortable and a lot more aggressive, but obviously if you have not played, you hope in the second half, or in this case the second quarter, that you maybe can take advantage of a little bit of fatigue or whatever.”

With the Wolfpack trailing by as much as 14 early in the second quarter, the lid finally lifted. Senior guard Aislinn Konig dropped a defender on the right wing with a deft fake and drilled a dagger, and from there the Pack started rolling. After freshman center Camille Hobby followed up Konig’s 3 with a short jumper and the Pack got a stop at the other end, Georgia Tech was forced to take a timeout with NC State threatening to explode.

“I would argue that it wasn’t a lack of confidence for us,” Konig said. “Shots weren’t falling, but we were still taking good shots, and we were moving the ball around and attacking. I think it was more patience. [The 3] was the moment where we start to see shots go in, and then it starts to click. That is a lot of fun and allows us to get into a rhythm.”

Out of the timeout, the Wolfpack and Yellow Jackets traded baskets, but slowly NC State chipped away at the Georgia Tech lead, whittling it down from nine points at the timeout to just four at the one-minute mark, when the Pack forced the Jackets into a shot-clock violation, which seemed to not only energize the Wolfpack on the court, but also in the stands as the fans got back into the game.

After the shot-clock violation, an excellent baseline cut by Konig and a pair of free throws from junior guard Kai Crutchfield on the ensuing possession brought the game level at 23 apiece at the half. Part of the Pack’s success in the second quarter came from switching up its defensive philosophy, swapping from man-to-man to a zone.

“I think we got some transition going,” Moore said. “We were able to get stops, which allowed us to get out and run. As far as the zone, I did feel like from watching film that the zone might be something that we could use to disrupt them a little bit … We never use it if things go well, but obviously, things weren't going so well.”

Forced into the game after sophomore center Elissa Cunane picked up her second foul early in the second quarter, Hobby was arguably the Pack’s best player in the first half. The newbie finished with four points and three rebounds in just nine minutes of action. Hobby was also solid defensively on the other end, committing zero fouls, while Cunane, junior forward Kayla Jones and freshman forward Jada Boyd combined for five in the half as the Pack’s frontcourt struggled to contain forward Lorela Cubaj.

“My main goal was to just play hard,” Hobby said. “I felt like we just needed something to get us going. We kind of started off a bit slow; I really just wanted to help the team any way I could.”

NC State’s momentum continued after the break, as with its starters back on the court, the Pack started the half on a 10-2 run. After watching from the bench with two fouls as her fellow underclassman center bossed around the Georgia Tech frontcourt, Cunane came out looking unstoppable. The Lisa Leslie Award finalist picked up eight consecutive points, including two and-1s, for the Pack on its 10-2 run.

“Coach came up to me and said, ‘You’ve got to demand the ball inside,’ and they were double-teaming,” Cunane said. “We started knocking down shots, so that opened up the double-team more, and I was able to score inside.”

While the Pack came out looking to bury the Yellow Jackets, Georgia Tech wasn’t ready to roll over yet, battling back with a run of its own. Closing the lead to as little as a single possession, the Yellow Jackets wouldn’t stay down, but the Pack managed to hold on to the lead.

The back-and-forth second-half battle continued into the fourth quarter, but the Pack’s big second quarter proved decisive, as the Yellow Jackets never led in the second half and only managed to tie it up once for a grand total of 19 seconds, before a Konig layup put the Pack back in front.

After her one-woman destruction of the Wolfpack in Reynolds Coliseum earlier this season, the Pack managed to hold Francesca Pan to 15 points, half of what she scored in Reynolds.

“As a team, we were trying to focus more on her,” Konig said. “She has the potential to go off and be a huge player for that team, and last game she scored 26, and she has been playing well all tournament up to this point, so we were trying to force other people to hit shots and helping off of players that we thought we would have a better chance of guarding.”

NC State will be back in action Saturday for the ACC Tournament semifinals at 2:30 p.m., when it faces the winner of No. 3 seed Duke and No. 6 seed Boston College.

By the numbers: Women’s basketball vs. Georgia Tech, ACC Tournament

The No. 10 NC State women’s basketball team came away victorious in the quarterfinals of the ACC Tournament despite an abysmal first quarter. Here are some key numbers from the Wolfpack’s 57-48 victory over the Georgia Tech Yellow Jackets.

NC State men’s soccer is an offensive force, needs defense to catch up

What we learned from Kevin Keatts' first presser of the year