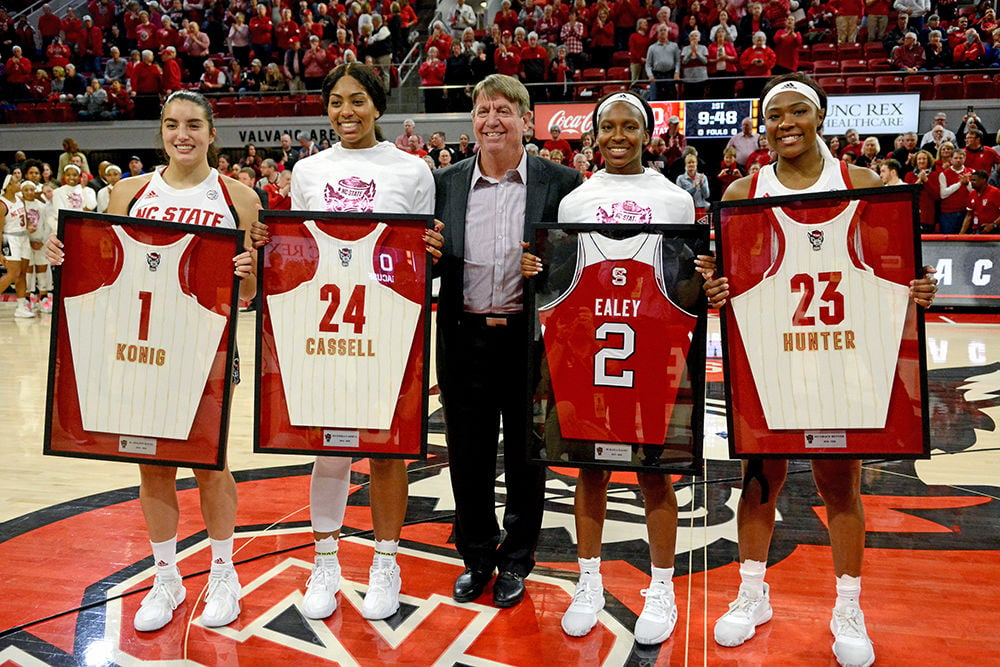 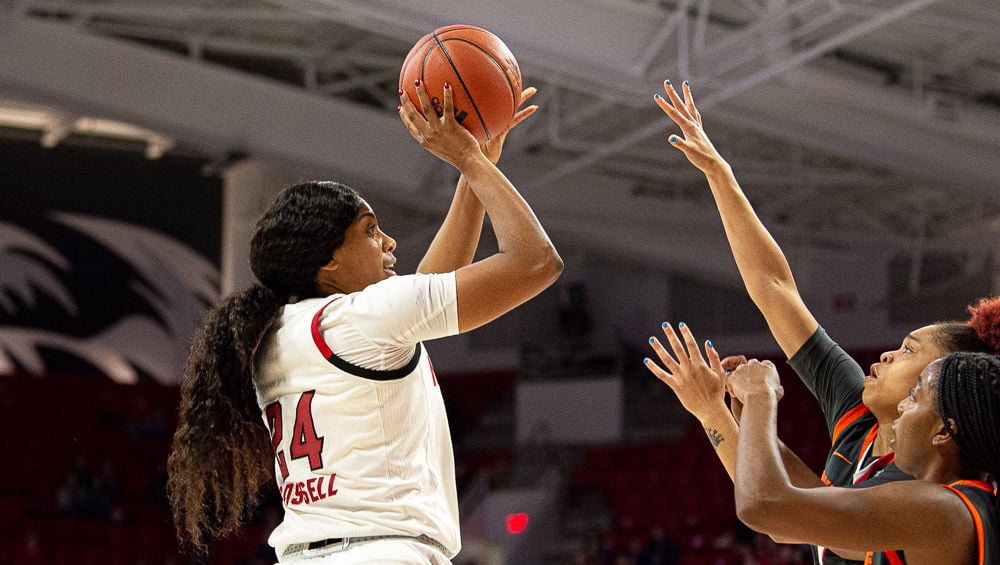 With a 69-60 win over Syracuse Thursday night, the No. 8 NC State women’s basketball team capped off its senior night that saw the last regular-season home game played by guards Aislinn Konig, Grace Hunter and Kaila Ealey, and center Erika Cassell.

With the last regular-season home game of the four’s career in the rearview mirror, taking a look back at the group’s unfinished legacy shows a combined 347 games of experience, back-to-back NCAA Tournament Sweet 16 appearances, multiple ACC Tournament semifinal games and more. With one game still to play, the 2020 class holds the program record for most ACC wins.

A three-year starter and one of head coach Wes Moore’s most trusted players he’s ever had, Konig is second all time in program history with 277 3-pointers and owns the program record for 3-pointers in a season with 93, a record she set in 2019 by breaking her own record from the year before. An off-ball guard her first two years and a point guard the last two, Konig is as vital to a program as anyone in the country. The British Columbia native has been the Wolfpack’s vocal leader and will hang up her shoes in a month as one of the best to ever wear “NC State” across her chest.

“We as a class have had the most ACC wins out of everyone in the program,” Konig said. “After coming off of a lull of a four-year span of not going to the NCAA [Tournament], we take a lot of pride in the fact that we are able to be here and we’ve helped build this program back up to a top-10 team.”

Konig was one of Moore’s most sought-after recruits, someone he knew from the jump that he wanted. Securing her commitment was one of the first steps to returning the women’s basketball program back to national prominence, and it’s something neither of them will ever forget.

“I remember the night she called me and told me she was coming to NC State,” Moore said. “... That was a big get for us at that time and our progression towards building something. She’s done so much for us. It’s going to be hard.”

The starting point guard on the 2017-18 team’s first Sweet 16 appearance in over 10 years, Ealey was a lightning rod of electricity before her knee injury. The fifth-year senior will finish her career with over 400 points, 300 rebounds and 200 assists. Never the biggest or strongest player, but always one of the hardest-working, Ealey embodied what Moore has preached from day one with the NC State women’s basketball program: effort.

“She’s a kid from Raleigh, wanted to go to NC State,” Moore said. “She had other ACC offers, she always wanted to go to State. So you hate that she had to go through all those [injuries] but you can see what she can do for us.”

With over 100 games under her belt, Cassell is one of the most experienced NC State women’s basketball players of the last couple of decades. Although a knee injury cut her season short last year, as the starting center Cassell was a vital part of the Wolfpack’s historic 21-0 start. She will close out her Wolfpack career with over 300 points and 300 rebounds.

“I just think our class is really special,” Cassell said. “We have four people that have done amazing things for this program in different ways and at different times. Collectively it’s gotten us today where we are as a team.”

Rounding out NC State’s seniors is Grace Hunter. The Wolfpack’s leading scorer at the time of her devastating knee injury in January of last season, Hunter is only in her second year playing at NC State but has made her mark. Highlighted by two 21-point double-doubles in the 2018-19 season and her 3-pointer heroics in an early-February win over Duke, Hunter’s fiery personality and energy is nearly unmatched.

“Last year leading us in scoring, second in rebounding, doing everything for us,” Moore said. “... She’s a kid that’s really passionate about basketball.”

The season isn’t over and with one more regular-season game, the ACC Tournament and the NCAA Tournament remaining, the group of seniors still has opportunities galore to cement their legacy. But when their season ends in a month, no matter what happens next, Konig, Hunter, Ealey and Cassell will leave behind a legacy of winning and of helping bring NC State women’s basketball back to national prominence.

The No. 8 NC State women’s basketball team got back on track Thursday night, beating Syracuse 69-60 on Senior Night inside Reynolds Coliseum.

By the numbers: Women’s basketball vs. Syracuse

On senior night inside Reynolds Coliseum, the No. 8 NC State women’s basketball team beat Syracuse 69-60, snapping a three-game home losing streak. The Wolfpack seems to have gotten back on track after hitting a tough speed bump over the past few weeks. Here are some of the key numbers from the Pack’s win.