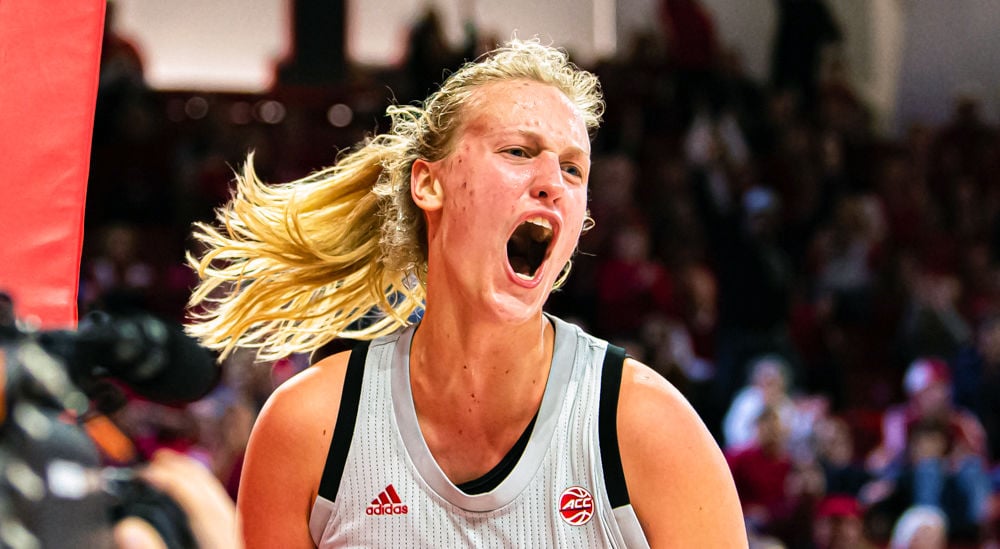 Sophomore center Elissa Cunane celebrates getting a basket and a foul against Virginia Tech on Thursday, Jan. 2 at Reynolds Coliseum. Cunane tied her career-high of 28 points as the Wolfpack won 76-69. 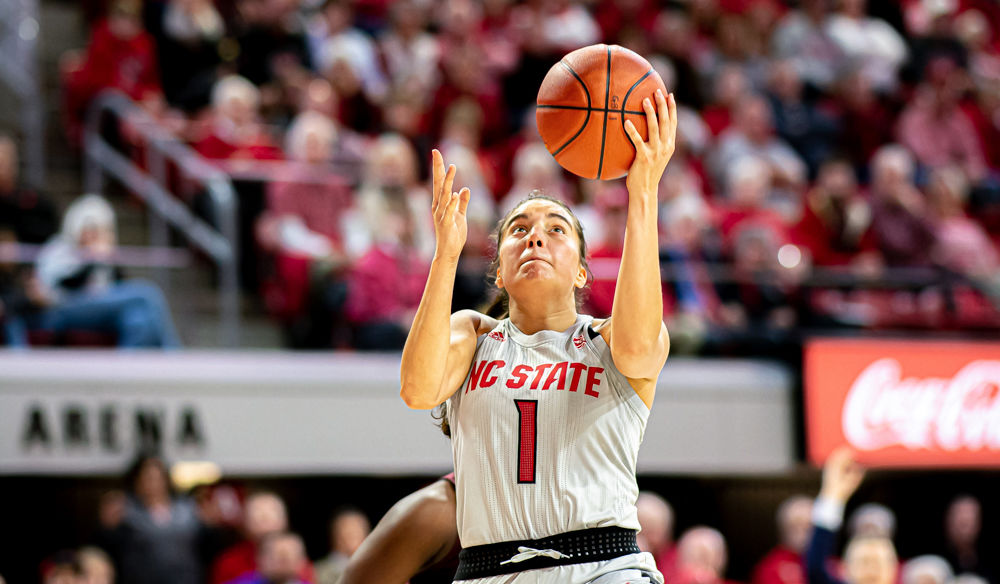 Sophomore center Elissa Cunane celebrates getting a basket and a foul against Virginia Tech on Thursday, Jan. 2 at Reynolds Coliseum. Cunane tied her career-high of 28 points as the Wolfpack won 76-69.

Sophomore center Elissa Cunane and senior guard Aislinn Konig took turns putting the team on their backs in the second half, as Cunane scored 23 points in the half and Konig hit clutch shot after clutch shot to lead the Wolfpack (13-0, 2-0 ACC) over a feisty Hokies (10-3, 0-2 ACC) squad.

“That was a tough game,” said head coach Wes Moore. “I’m proud of the way we didn’t panic … and kept our composure. I have a lot of confidence in these players and this team. I thought they did a great job.”

In its first conference test of the season, the Wolfpack struggled out of the gate. An 11-0 Virginia Tech run put NC State in an early 11-5 hole, and the Hokies continued to pile on from there. After racing out to a 10-2 run to begin the second quarter, Virginia Tech doubled up the Pack’s score, opening up a 24-12 lead just a few minutes into the second frame.

But with the undefeated Wolfpack staring a double-digit deficit in the eyes, veterans Konig and junior guard Kai Crutchfield put the team on their backs to close out the half. First, the senior Konig went on a personal 8-0 run, with back-to-back 3-pointers and a fast-break layup forcing a Virginia Tech timeout halfway into the period and sending a packed Reynolds crowd into a frenzy. Then Crutchfield scored the next six points for NC State, as the duo combined to score 16 straight Wolfpack points before two free throws by Elissa Cunane.

“Any moment like that, where you’re able to get the crowd involved, is huge,” Konig said. “I think that was probably the turning point where we started to find our flow a little bit.”

A poor shooting half plagued NC State, as the Wolfpack shot just 9 for 28 in the first half, and outside of Konig’s 3-for-5 shooting, hit on just 26% of their shots. Cunane and junior forward Kayla Jones combined to connect on just 1 of 8 shots in the half, and the Pack’s inability to find the bottom of the net led to a 33-28 halftime deficit.

The Wolfpack came out blazing in the second half, outscoring the Hokies 20-7 in the first 6 ½  minutes of the third quarter to reclaim the lead 48-40. The Pack locked down on defense, forcing eight turnovers in the third quarter alone. The NC State guards made an effort to get the ball to their superstar 6-foot-5 center on nearly every possession, and Cunane made sure the decision paid dividends. The Summerfield, North Carolina, native scored nine points on 4-for-6 shooting in the quarter, helping the Pack take a slim 50-49 lead into the final period.

As Virginia Tech fought to stay in the game, Konig did her best to put the Hokies away. While Virginia Tech’s Aisha Sheppard knocked down shot after shot, Konig was always there with an answer. The Wolfpack’s 5-foot-10 vocal leader knocked down two 3-pointers and a layup and grabbed two steals in the first half of the fourth quarter to keep the Hokies at arm’s length.

“Despite the fact that maybe I haven’t been shooting as well as I did last season, it’s just exciting to play in a big game,” Konig said. “Not just to see my shots go in, but to see huge shots go in for my teammates … that’s just the type of stuff that gets everybody on the floor hyped.”

With the Pack down 67-64 and under three minutes to play, it was Cunane’s turn to step up. First she got a layup to fall and made a free throw to complete the and-1, then knocked down two free throws for the lead after an empty Hokies possession. But she wasn’t done yet. Another layup gave her seven straight points, and with under 90 seconds to play, the Wolfpack took a 71-67 lead that it would never relinquish. It was Cunane who would have the final say, sinking three free throws in the final 14 seconds to ice the game and secure the Pack’s second conference win of the season.

“We trust her to the point where we didn’t even notice,” Konig said. “We know that if we give the ball to her, she’ll do good things.”

Cunane tied a career high with 28 points and pulled down nine rebounds, just barely missing out on her eighth double-double of the season. Konig finished second on the team with 18 points, going 4 for 7 from downtown and 7 for 12 overall. The do-it-all Jones turned in another all-around performance, scoring 11 points to go with 11 rebounds and six assists.

With the bench struggling and the starters on fire in the second half, Moore chose to go to just one sub in the second half. Outside of seven minutes from graduate guard Kaila Ealey, the Wolfpack’s starters played the entire final 20 minutes.

“In the second half, we didn’t sub a lot,” Moore said. “Elissa was hot, [Jones] was hot … Ace obviously hit some big threes … In the end, a tough win, a gutsy win. Had to find a way to hang in there and pull it out.”

NC State will be back in action Sunday, Jan. 5 at noon, when it takes on Virginia at home inside Reynolds Coliseum. The game will be broadcast live on the Regional Sports Network.

By the numbers: Women’s basketball vs. Virginia Tech

In a thrilling 76-69 win over Virginia Tech, the NC State women’s basketball team fought back from multiple double-digit deficits for an important ACC win. Here are some of the key numbers that might not show up in a traditional box score.