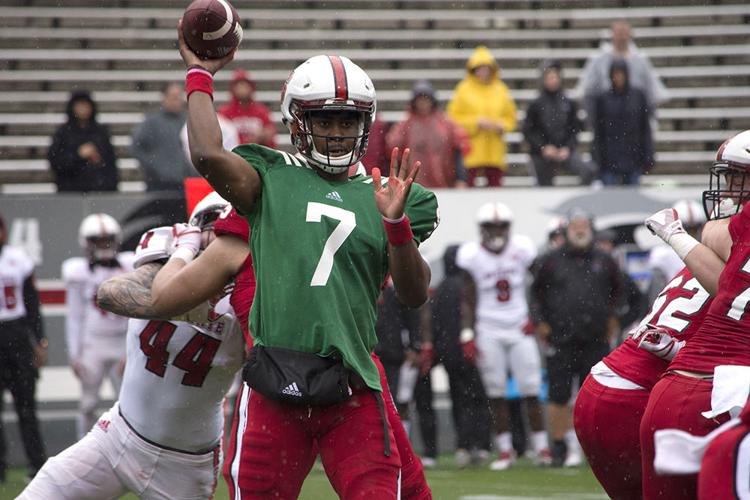 Redshirt freshman quarterback Matthew McKay throws the ball at Carter-Finley Stadium during the annual Kay Yow Spring on Saturday, April 7. McKay is a native of Raleigh and played at Wakefield High School. 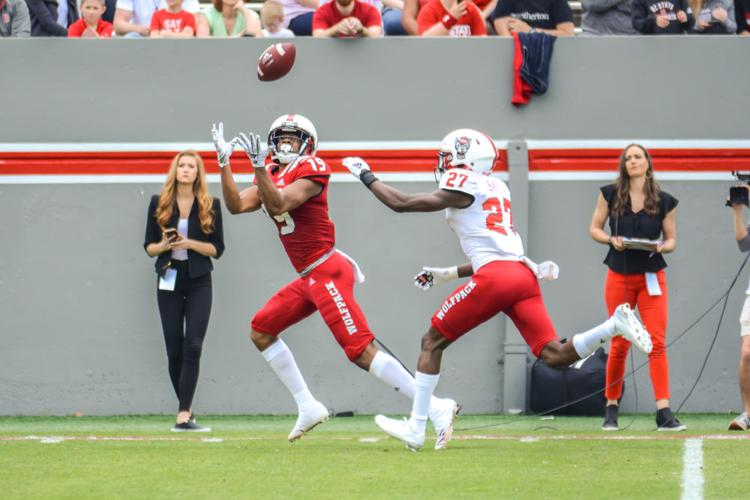 Redshirt freshman quarterback Matthew McKay throws the ball at Carter-Finley Stadium during the annual Kay Yow Spring on Saturday, April 7. McKay is a native of Raleigh and played at Wakefield High School.

Kicking off its 2019 season with a matchup against East Carolina, NC State football will be looking for another blowout win to follow up last season’s 58-3 triumph over the Pirates.

With many new faces added to the starting lineup for the Wolfpack, head coach Dave Doeren has full faith that this new dynamic will be powerful.

“We are a young football team,” Doeren said. “There’s nine guys that are going to be starting for their first time in this game.”

As these two teams take the field on Saturday, Aug. 31, fans will want to take note of these crucial matchups.

With many back-and-forth predictions as to who would be controlling the Wolfpack’s offense this season after quarterback Ryan Finley was selected by the Cincinnati Bengals in this year’s NFL Draft, Doeren has finally put an end to the gossip. Announced earlier this week, redshirt sophomore Matt McKay will be NC State’s starting quarterback against the Pirates.

“Matt's accuracy … and consistent play is what prevailed,” Doeren said.

While McKay only had a few appearances with the Wolfpack last season, the sophomore continued to prove his abilities throughout spring practices to secure his slot as the starting quarterback.

ECU defensive end Kendall Futrell will be McKay’s biggest offensive challenge, as Furtell finished out his 2018 season with 34 total tackles and four sacks. The returning senior will be bringing back a strong dominance and leadership to the defensive line in hopes to overtake the Wolfpack.

Junior wide receiver Emeka Emezie will be one of NC State’s star receivers after posting a total of 616 receiving yards with five touchdowns in 2018. As a veteran of the team, Emezie will likely be leading the offensive receptions alongside his teammate, 6-foot-4 redshirt junior C.J. Riley.

Riley earned his position as an essential part of the receiving corps after contributing 28 receptions last season and assisting the Wolfpack to multiple victories with two touchdowns.

Senior Michael Witherspoon will be Emezie and Riley’s biggest competition as the cornerback is coming off an impressive 2018 season with 26 solo tackles and five passes deflected.

As the Pack’s leading change-of-pace back last season, sophomore Ricky Person Jr. will be back to give defenses fits for the Wolfpack this year. While averaging 4.2 rushing yards in 2018, Person found paydirt twice on the ground and once through the air.

Freshmen Zonovan Knight and Jordan Houston have been impressive throughout spring practices and fall camp and are expected to play big roles in a Wolfpack running game that could provide defenses with a measure of unpredictability.

“We rotate a lot with certain positions with our tempo in offensive,” Doeren said. “You’ll see a lot of different skilled players at receiver and at running back.”

Linebacker Bruce Bivens will have his sights set on Person and the Wolfpack ground game throughout this matchup after two full successful seasons as a Pirate's linebacker. In 2018, Bivens secured a total of 61 tackles, 27 of which were solo, with two sacks.

Redshirt junior Dylan Autenrieth will likely be NC State’s starting tight end this season after 2018 sophomore performance that saw him average 13.5 yards per reception with his longest reception standing at 27 yards.

Defensive end Alex Turner will be the must-watch defensive player for the Pirates after his season last year. With a total of four sacks and one pass deflected, Turner will be making his way through the offensive line as he weaves his way around Autenrieth and toward McKay.

While concerns continue to arise as to who all will be playing on the offensive line this season for the Wolfpack, Doeren and the rest of the coaching staff have kept an open mind throughout preseason and will continue to do so on game days.

Kickoff is set for 12 p.m. Saturday at Carter-Finley Stadium with live coverage from the ACC Network.