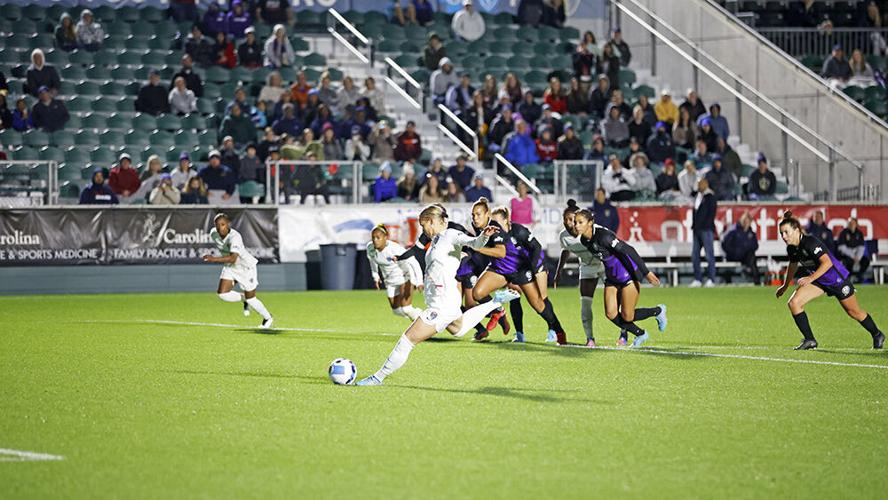 NC Courage defender Merritt Mathias takes a penalty kick in the second half of the preseason match against Orlando Pride on Saturday, March 26, 2022 in Sahlen’s Stadium at WakeMed Soccer Park. NC Courage had 61% possession during the match with 17 shots. NC Courage beat Orlando Pride 1-0. 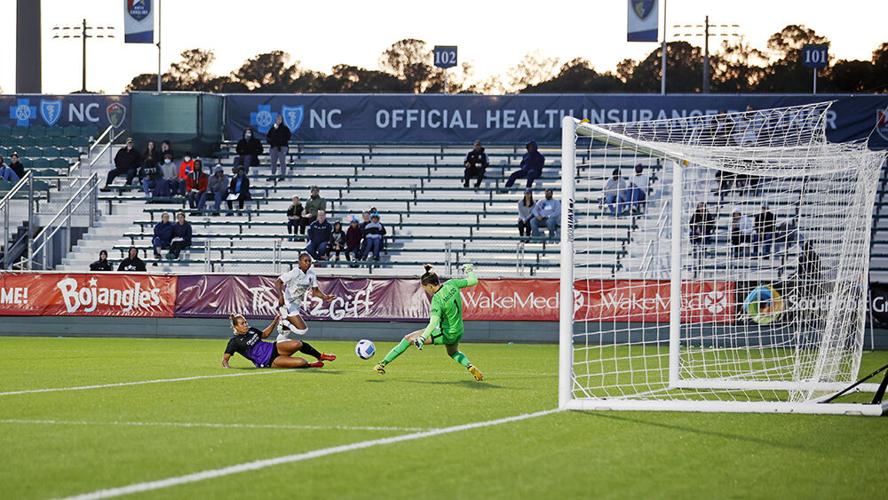 NC Courage defender Merritt Mathias takes a penalty kick in the second half of the preseason match against Orlando Pride on Saturday, March 26, 2022 in Sahlen’s Stadium at WakeMed Soccer Park. NC Courage had 61% possession during the match with 17 shots. NC Courage beat Orlando Pride 1-0.

The North Carolina Courage picked up its second win of the 2022 NWSL Challenge Cup on Saturday, March 26, beating the Orlando Pride 1-0 at WakeMed Soccer Park.

“It was an up-and-down performance,” said head coach Sean Nahas. “...I thought we were okay in possession. I thought we gave the ball away too carelessly and too freely at times and gave free possessions away when we didn't necessarily have to. I thought they did a good job of adjusting their press, and locking us in certain areas. So it made it tough because the spaces were so compact to get the extra numbers in areas that we wanted to.”

While it was a slight drop off from the team’s emphatic performance in the opener, Nahas liked the fight that his young team showed.

“The one thing I said to the team is, we're young and what they showed today is that they have a fight in them and a competitiveness and we're going to need down the road,” Nahas said. “It doesn't always have to be perfect. I mean, we had 60% possession and 81% passing accuracy, which is great and then we 144 passes in the final third, but I'm interested to see how many chances we created off of those 144. But, I'm proud of the group and their efforts… All the credit goes to the players.”

Right back Merritt Mathias provided the game’s only goal, a rocket of a penalty kick following a 60th-minute handball from Orlando’s Gunnhildur Jónsdóttir.

From the spot, with love. 💙 pic.twitter.com/hNzGzqVQxC

“I think you have to step up to the PKs knowing that like 100% you're scoring, if you don't then doubt seeps in and then you start overthinking it,” Mathias said. “So you have to step in and trust yourself that you've practiced it a million times and kind of just let it rip.”

While the Courage managed just one goal, the forward line looked sharp once again. Forward Taylor Smith and midfielder Brianna Pinto led the attacking charge for the hosts, continuing their great starts to the Challenge Cup.

In the Courage first two games of the year, Smith has looked the best she has since her 2021 return to the club. Although she is listed as a defender on the roster, Smith has started both games up top for the Courage and caused a lot of problems for both Orlando and NJ/NY Gotham’s defenses.

“Taylor has been exceptional,” Nahas said. “Taylor and I have a really good relationship and sometimes you have to know what makes a player tick and know certain ways to do it. The way Taylor has been playing, if we get this from Taylor every single week, day in and day out… It's a massive uplift for the group, but I'm just more proud of her. I know she went through a tough spell with the injury and coming back and went through a hard spell on and off the field and for her to be at the level she's at, as a person, I couldn't be any more proud of her.”

Smith is far from the only Courage player in a different position than they are listed on the roster. Malia Berkely, listed as a defender, has started each game alongside Denise O’Sullivan in the holding midfield role. While she played as a center back at Florida State, Berkely said holding midfield was her natural position growing up.

“I feel like I'm comfortable moving back into that position,” Berkely said. “[Nahas] kind of wants me to sit but have the freedom to go forward if it’s on kind of thing. We're still working on a bunch of different ideas, kind of playing to our strengths, playing to our opponent's weaknesses. So I think my role will be different every game.”

With Debinha out of market, Kiki Pickett got the start in the attacking midfield role alongside Pinto. Stepping into Debinha’s position is a tall task, but Pickett played well in the 1-0 win.

“I think some people will call me crazy, but there's something about Kiki,” Nahas said. “She's comfortable on the ball. She's got a good way about her. She's built low to the ground, so her ability to turn and get out of pressure. I thought she did a really good job of solving spaces. Sometimes she got caught a little bit too high and wasn't the length that we wanted inside, but that's what [comes with] inexperience in that area. But the fact that she played in there and the way she did and battled, I couldn't be any happier for her.”

After the game, Nahas said Debinha is dealing with the same “hangup, for lack of a better word” that O’Sullivan was dealing with heading into the first game of the year.

Nahas also said in the postgame that Kerolin, who the team signed this offseason but has yet to be able to make it into camp, should be in in the next couple of days.

The Courage will now hit the road for the first time this year, heading up to Washington, D.C. to face the reigning NWSL Champion Washington Spirit on Wednesday, March 30. The last time the Spirit and Courage played, the Spirit knocked the Courage out of the NWSL playoffs in extra time.

Heading into the game against Washington, the Courage sit four points clear of the Spirit at the top of the East Division standings.

I'm Nicholas Schnittker, Technician Vol. 102 Sports Editor. I'm in the class of 2022 and am currently majoring in communication and minoring in journalism.Twitter: @nick_schnittker

OPINION: It’s time to reassess the line between religion and politics