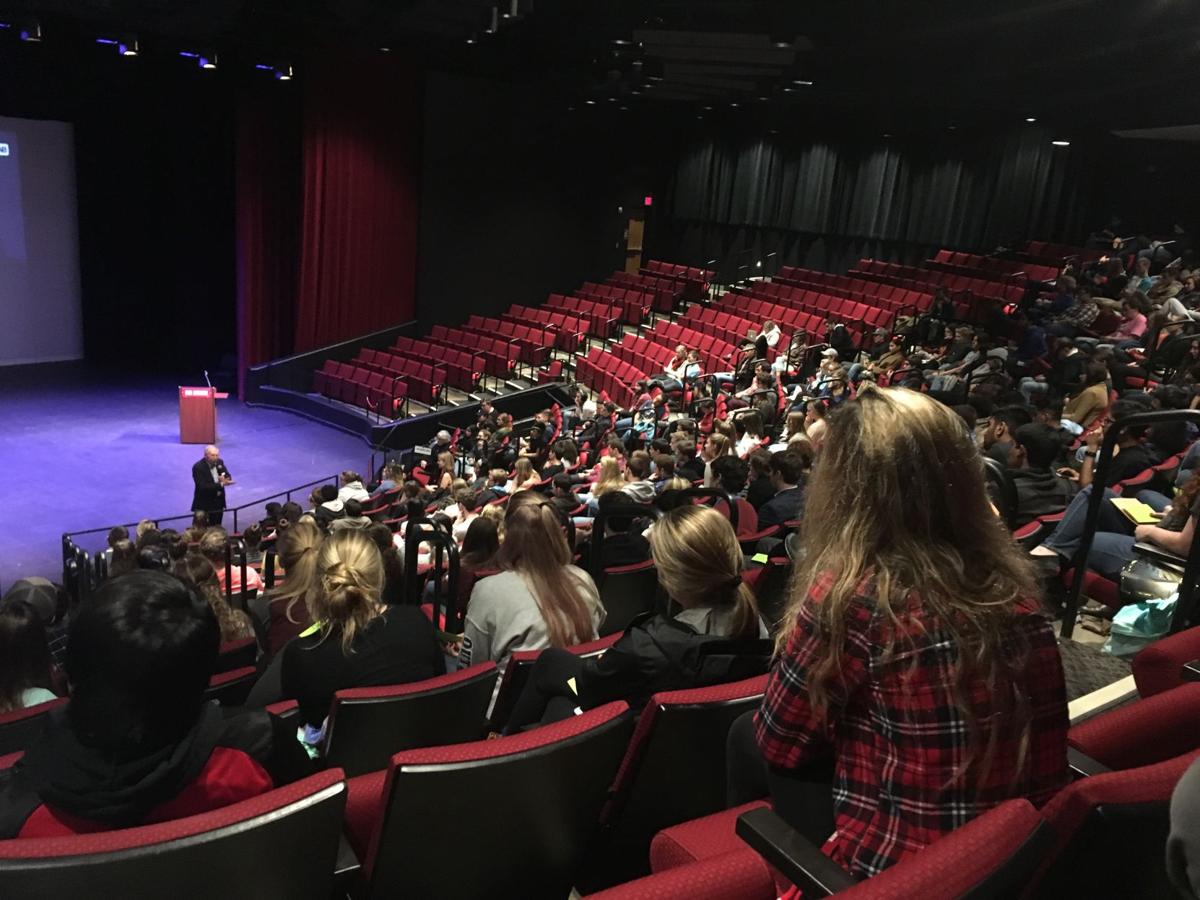 On Thursday evening Peter Stein answers student questions in Stewart Theater about Kristallnacht and lessons of the Holocaust. 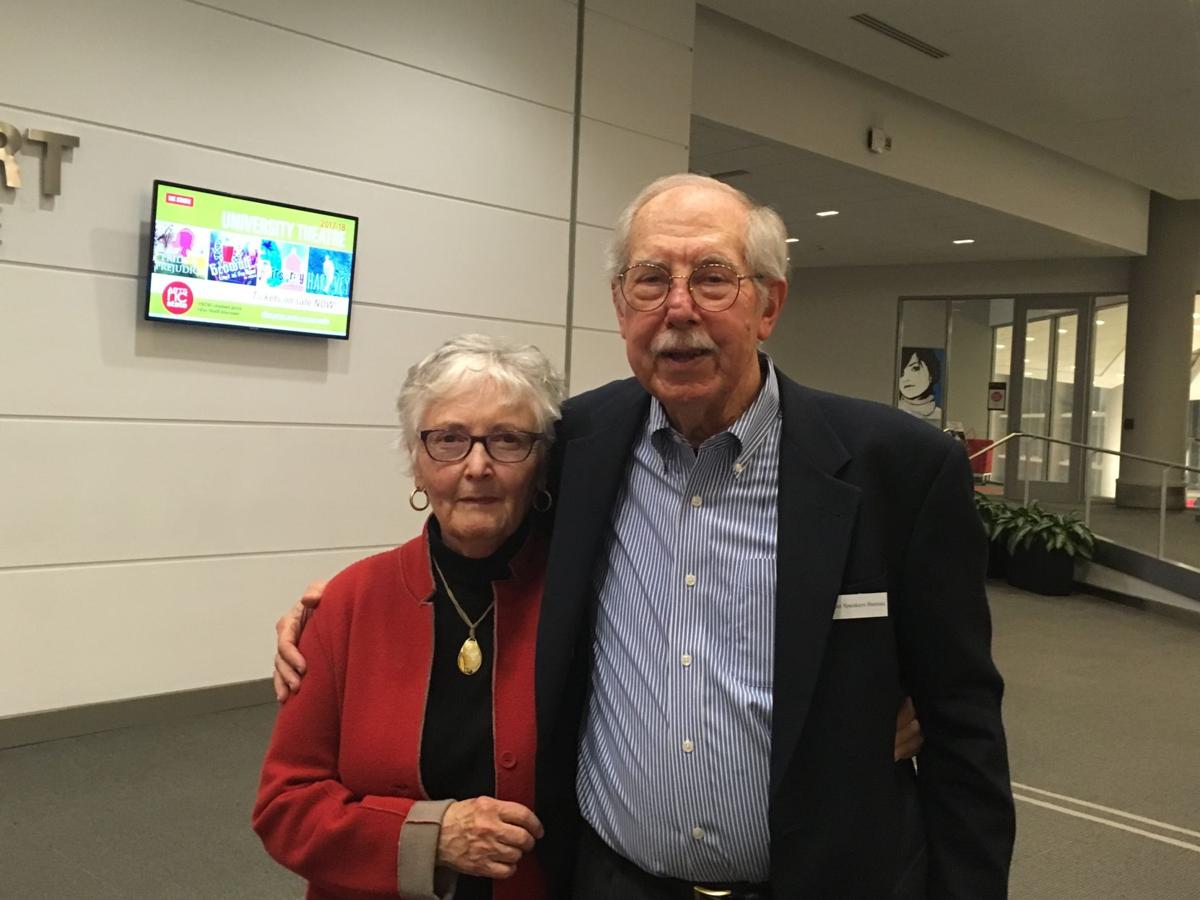 Peter Stein and Michelle Stein stand together in a photo after Peter Stein answered student questions in Stewart Theater on Thursday evening.

On Thursday evening Peter Stein answers student questions in Stewart Theater about Kristallnacht and lessons of the Holocaust.

Peter Stein and Michelle Stein stand together in a photo after Peter Stein answered student questions in Stewart Theater on Thursday evening.

On Thursday night Peter Stein, a Holocaust survivor and professor emeritus of sociology, answered questions in Stewart Theater of Talley Student Union for a large audience of students about Kristallnacht and lessons of the Holocaust, including the importance of remembering.

Stein was born in Prague in 1936, just a few years before Nazi Germany seized the Sudetenland from Czechoslovakia. Stein lived through the German occupation of Prague and his father was forced into the Terezin ghetto following Kristallnacht.

The Q&A centered on Kristallnacht, an event that took place on Nov. 9-10, 1938 when violent anti-semitic riots instigated by the Nazis destroyed thousands of Jewish-owned businesses and homes and synagogues throughout Germany, Czechoslovakia and Austria. Kristallnacht is often cited by historians as the day the Holocaust began, according to Stein.

Throughout the Q&A Stein insisted that the most important thing that our generation can do is to learn about the Holocaust, so that future generations won’t repeat the same course of events. This message resonated with the student audience, including Elli Kaplan, a first-year studying engineering.

“Keeping the memory of the Holocaust alive, not necessarily the mourning of it … just spreading the word, so we don’t have this happen again in the future,” Kaplan said.

A key message for some students in the audience was history of the events that lead to Kristallnacht, and subsequently the Holocaust.

“I especially appreciated questions that brought a larger historical context on what was going on,” said Carl Hintz, a fourth-year studying mathematics. “Several questions brought to light how his experiences affected him personally throughout his life, which I thought was really important.”

Adrian Wiemir, a graduate transfer student from Germany studying electrical engineering, explained the irony in using the name Kristallnacht for the night that the Nazis raided synagogues, Jewish-owned businesses and households of Jewish faith.

“In Germany we call [Kristallnacht] Pogromnacht, we don’t use the word they use here because that is the word that was used by the Nazis, in order to distract from the horror of that event,” Wiemir said.

Wiemir elaborated that the word kristallnacht, which means broken glass in Germany, was used by Nazi propaganda to make the event sound less terrible than it actually was.

Stein mentioned during the Q&A that he is fearful of far-right political groups that are remnants of the Nazi movement. A reason for the reemergence of these groups is newer generations becoming forgetful of the Holocaust, according to Stein.

“The movement towards the right in Austria, Germany, Poland, Hungary, Holland is scary, because they are remnants of Neo-Nazi ideas that are coming forward again,” Stein said. “Witness what happened in Charlottesville, there was a rally at the University of Virginia’s campus of Neo-Nazis, KKK, a number of white supremacist groups and anti-semitic groups, so it’s still with us.”

One of the final questions Stein answered was about creating a bridge of communication between groups of people who are different in thought, stressing the importance of humanity when communicating with others.

“Certainly I would suggest starting with what we have in common,” Stein said. “You and I are both human beings, both concerned about leading productive lives, caring for our family, caring for our friends, and try to create some kind of link with that.”

The changes NC State has put in place to keep campus healthy and safe!

Wolfpack baseball seals sweep over No. 16 Pitt with five homers