You have permission to edit this article.
Edit
News
Sports
Culture
Opinion
Video
Galleries
Advertise With Us
About
1 of 8 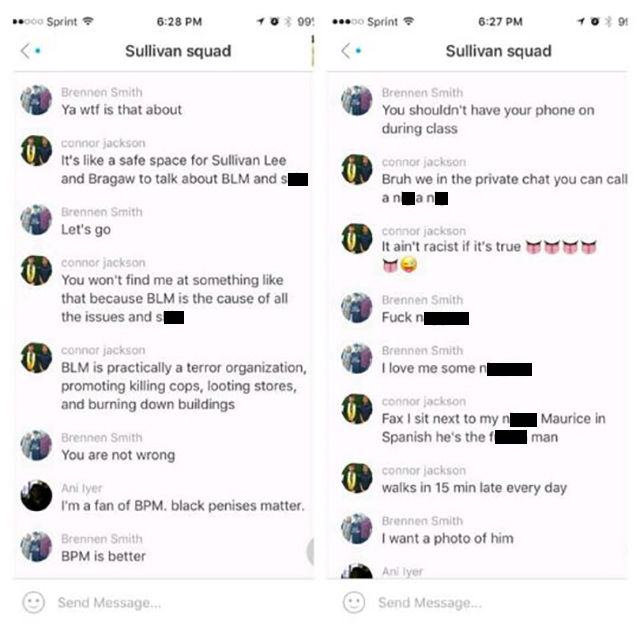 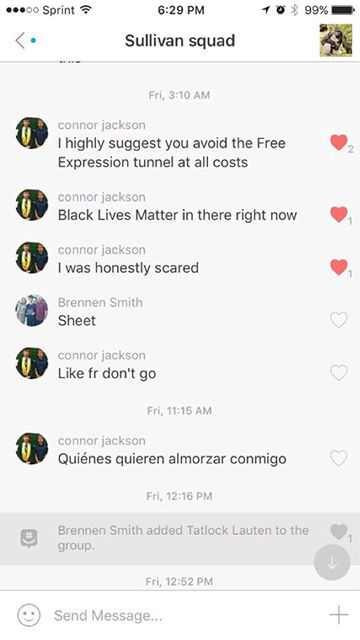 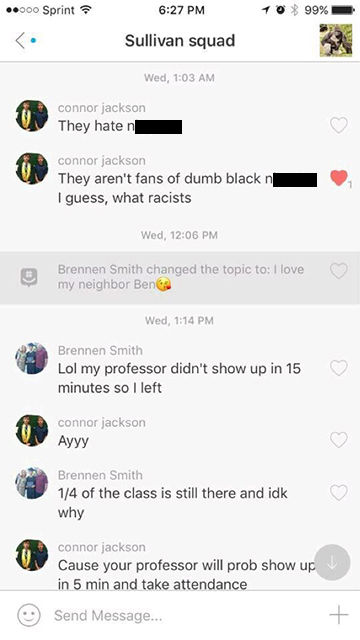 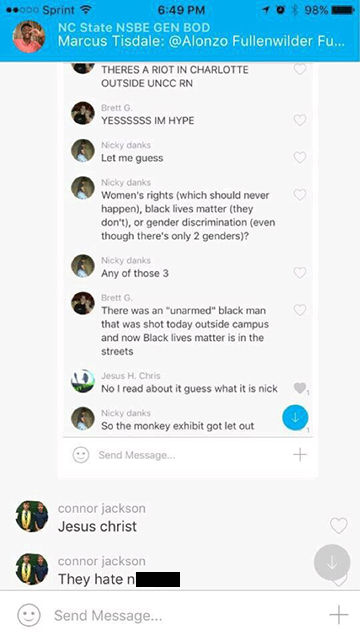 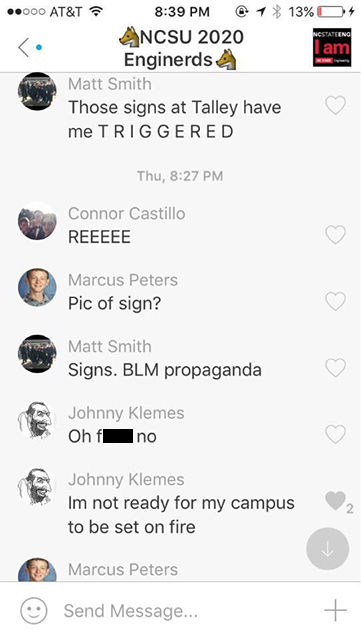 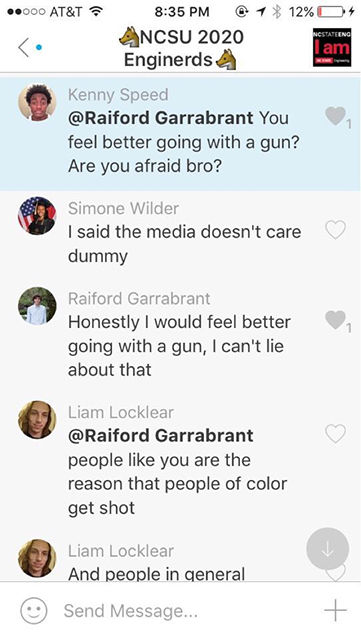 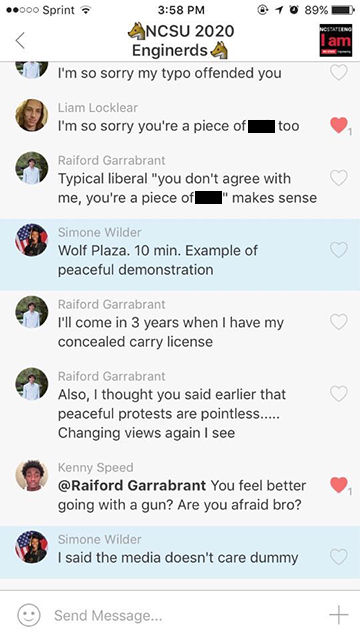 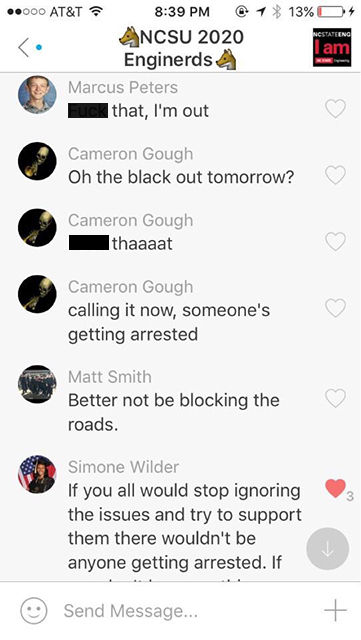 Two students issued an apology to the entire NC State student body Wednesday after screenshots of a GroupMe chat laced with racial epithets were posted to the Wolfpack Students Facebook group Tuesday night.

The screenshots, which feature an extensive conversation between two NC State freshmen, Connor Jackson and Brennen Smith, showed texts that mock the Black Lives Matter protests that have been taking place in Charlotte and around campus. The conversation also featured messages like “Bruh we in the private chat you can call a n----- a n-----,” and the N-word was used repeatedly.

In their apology, which was emailed to all NC State students, Jackson, who is studying psychology, and Smith, who is studying agricultural sciences, said that they know what they said “is very offensive and hurtful to the African-American community here on campus.”

The two mentioned that they hope their close friends and the entirety of the NC State community will forgive them and their actions.

“We’re sorry for our words, and we’re sorry for how they hurt many people, some of whom are very close to us,” they wrote. “The pain we’ve caused will take a long time to heal; it is just our hope that it will be able to at some point.”

The initial post in Wolfpack Students drew a lot of reactions from group members, garnered the attention of members within Student Government and prompted a video message from Chancellor Randy Woodson.

“Along with most of you, I share great disappointment and frustration that some in our community not only have bigoted views, but choose to express those views that stand in direct opposition to the diverse and inclusive campus culture that we’re striving to achieve,” Woodson said in the video. “This university will not be defined by a few on our campus who profess racism or hatred.”

Mike Mullen, vice chancellor and dean of the Division of Academic and Student Affairs, said that while the messages the students sent to each other “may be hurtful or hateful, they are not hate speech in the sense that anyone is directly threatened,” and therefore are protected under the First Amendment and not punishable under the university’s code of student conduct.

Achaia Dent, the organizer behind the die-in protest that was staged at Talley Student Union on Sept. 23 and a freshman studying animal science, said that she thinks Jackson and Smith’s apology was unintentional and that the university should be doing more to combat racism on campus.

The texts were screenshotted by Marcus Lowry, a sophomore studying mechanical engineering and Jackson and Smith’s suitemate, after he was added to the group by a friend. According to the Nubian Message, within an hour of Lowry discovering the messages, the resident advisor and resident director in Sullivan Hall had been alerted and the messages were posted on social media.

“I think the situation has been handled as well as to be expected, but that’s honestly not saying much,” Lowry said in an email. “The chancellor released a video addressing the subject, but I think it will end up doing more harm than good. I believe that him protecting racism with the First Amendment in the video just opens the door for more racists to show their true colors.”

Since the GroupMe featuring messages from Jackson and Smith was shared in Wolfpack Students, screenshots from another group called “NCSU 2020 Enginerds” that reference the Black Lives Matter protest that took place in Talley, have surfaced on Twitter.

John Klemes, a freshman studying engineering and member of the “NCSU 2020 Enginerds” chat, said that he got involved in the chat because he wasn’t “ready for [his] school to be burned down.”

“[This] wasn’t me trying to say anything about the nature of African-American people,” Klemes said. “I wasn’t seriously concerned with them burning down the school.”

When asked about his concerns for the screenshots going viral on social media, Matthew Smith, a freshman studying engineering and another member of the “NCSU 2020 Enginerds” chat, said, “[t]he biggest concern for most of us is we don’t want an article, we don’t want all this to get out there. Our concern is defamation of character and libel and we don’t want that to show up later.”

Lowry and Dent both spoke about how they hope this situation does not get swept under the rug by the university.

“Change needs to happen,” Lowry said. “The healing process has begun, but I have many friends in the National Society for Black Engineers and we will all continue to stick together through these rough times.”

On Thursday, Student Government will be hosting a Racial Climate Town Hall from 4 p.m. until 5:30 p.m. in Stewart Theatre. It is expected that the messages that have gone viral on social media will be a prominent part of the conversation.

Paul Nolan, the student body president and a senior studying materials science and engineering, said that the event will be open to everyone and dialogue-based.

“All of this is happening in a time where race relations on this campus are probably more tense than they have ever been, or at least in a very long time,” Nolan said. “We hope that everyone comes to the [town hall] and brings open minds to learn all perspectives to really understand where students are coming from.”

Gavin Stone, Adam Davis, Kenton Gibbs and Sam Messick contributed to the reporting of this article.

Never say never: Bieber is back