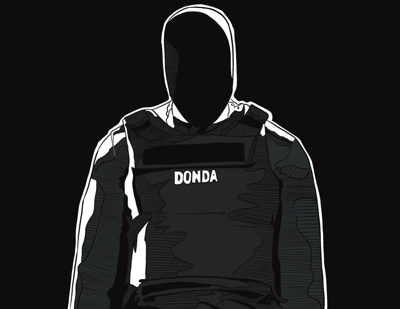 Rapper, producer, songwriter and former presidential candidate Kanye West made his highly anticipated return to the spotlight on Sunday, Aug. 29 with the release of his 10th studio album, “Donda”. The release came as a surprise to many, with West rarely speaking out about the plans for the album’s rollout over the course of the project’s promotion.

The lack of promotion from West personally has not lowered any of the hype surrounding the record’s release. Listening events defined the extent to which West was involved with marketing the project, hosting three before the eventual official release of “Donda.” Over the course of the three events, the album has undergone its fair share of changes and renovations but has now found its final form: a 27 track, 1 hour and 48 minute studio release.

Kanye fans and skeptics alike were thrilled at the opportunity to experience another release from one of the most polarizing figures in music history. From the fan’s perspective, “Donda” would hopefully be a step back toward the type of vibe that “The Life of Pablo” provided as opposed to the heavily gospel-inspired “Jesus is King” that premiered in 2019. From the viewpoint of a skeptic, “Donda” could be the nail in the coffin for West’s legacy, which many would argue has been tainted with his performative antics over the course of his entire career.

Initial opinions would lean in the fan’s favor, however, with the overall theme and styling of the album being very reminiscent of West’s work on “The Life of Pablo,” which debuted in 2016. Parallels between the projects can be found in the overarching themes of each record, with both putting extra emphasis on West’s experiences with his religion and how he uses it as a vessel to deal with the issues that plague his personal life. In his newest record, he manages to speak on these topics in a more mainstream fashion than he managed to do on “Jesus is King,” which is widely regarded as West’s least successful project.

Despite the step away from his previous gospel record, West shows no fear in making a point that his new, religiously-focused music is here to stay. That isn’t something West wanted to leave up to interpretation either, making it a clear point in the track “Pure Souls” featuring Roddy Rich in which West explicitly states, “this the new me, so get used to me.”

In “The Life of Pablo” fashion, this album allowed West to get a lot of things off of his chest without sacrificing the sound that his fans have clung to for years. Features played a key role in how West was able to achieve this, with this album boasting appearances from an absurd 37 artists across all of the tracks in this monstrous release. This is likely to cause a divide in terms of how much credit West can actually be given for an album with so many guest appearances, but with West turning 44 this past June, it seems clear that he is finding a new role as a producer first and a rapper second.

Features throughout this album also allowed for a plethora of sounds that were previously unexplored by the Chicago native. A perfect example of this is the track “Off the Grid'' featuring Playboi Carti and Fivio Foreign, a song with a heavy drill influence and a pair of uncharacteristic features for West. Regardless of the exploration of a new sound, West was able to play to the strengths of each of his features, especially Fivio Foreign, who delivered what many consider to be the best verse of his career up to this point.

Fivio Foreign leavin’ the booth after recording his verse on “Off The Grid” pic.twitter.com/XhlHgqF3i3

While this album likely won’t be in any sort of “gospel album of the year” contention, it still features many tracks that could’ve been slotted into “Jesus is King” with no issue. Songs like “24”, “New Again” and “Lord I Need You” are just a few tracks of many with gospel roots that received the Kanye West treatment in terms of production. The track “24,” specifically, carefully balances on the line of a gospel ballad and a song that can have widespread appeal outside of a religious point of view. This is a balance that West truly struggled to find on his first true attempt at a gospel album.

The implementation of the new, religiously-fueled Kanye along with the exploration of subgenres of rap that were previously untouched by West is a breath of fresh air to many, but he also made sure to pay homage to the specific sound that put him in the position he is today. The album’s tenth track, “Believe What I Say,” would fit nicely into a variety of West’s projects including “The Life of Pablo” and “Graduation.” The sound of these records was defined by heavy sampling and light-hearted production that Kanye masterfully hones in on here, on top of a Lauryn Hill sample.

West also brings back an unexpected familiar face on the LP’s second track, “Jail.” Longtime fans of West were blown away with the addition of a Jay-Z verse on the track, with the duo seemingly separated for good following their massive fallout in the early 2010s. It appears that the pair of perennial superstars, commonly referred to as “The Throne,” are back on good terms. One of West’s promoters for “Donda” even went as far as claiming that “Watch the Throne 2” would be debuting before the end of the year.

Music has certainly changed since the late 2000s and early 2010s, which were truly West’s best decades as a musician, but Kanye made a valiant attempt at capturing the sound of today’s hip-hop on various tracks in this record. The previously mentioned “Pure Souls” and “Hurricane” featuring Lil Baby and The Weeknd are prime examples of Kanye trying to relate to a new generation of rap listeners. That goal on both of these tracks was executed to near perfection, with Roddy Rich delivering a powerful feature on “Pure Souls” and Lil Baby and The Weeknd going above and beyond with their performances on “Hurricane”.

Despite its successes, “Donda” has plenty of lowlights as well, which is to be expected from an album with this size. Tracks like “Junya” featuring Playboi Carti and “Remote Control” featuring Young Thug were failed attempts at adapting to a modern sound for West. Kanye attempted to replicate the style of rapping that got Playboi Carti to the forefront of rap in the track “Junya” and it’s a style that just does not fit a 44-year-old man at all.

In the case of “Remote Control,” West sounds out of touch with modern times. As he rambles on about how he can get what he wants as easily as clicking a remote, Kanye fails to deliver any valuable bars and misses out on the chance to capitalize on a quality feature from Young Thug.

This project does not feel finished, and I expect to see some additional changes to it in the near future. In a similar fashion to the failures “The Life of Pablo” had on release, the mastering on Donda is not on par with West’s previous projects and will likely get a revisit and re-release sometime soon. Per West himself, the album was not even cleared by him for release before it dropped. In an Instagram post from Aug. 29, West stated “Universal put my album out without my approval”, which could cause some issues in the coming days should this be true, and there could be legal action for West to pursue.

A final impression on the project is that it won’t go down as one of Kanye’s best, but that doesn’t make it bad. Oftentimes with huge LPs such as this one, disorganization of the tracklist as well as inconsistencies in quality between songs plague the potential of the album as a whole. In terms of legacy, I expect this to be remembered as a solid album for West, who is likely approaching the end of his rapping career. One thing is for certain, West is going to own the charts with this album until Drake’s “Certified Lover Boy” provides a worthy challenge for the No. 1 spot.