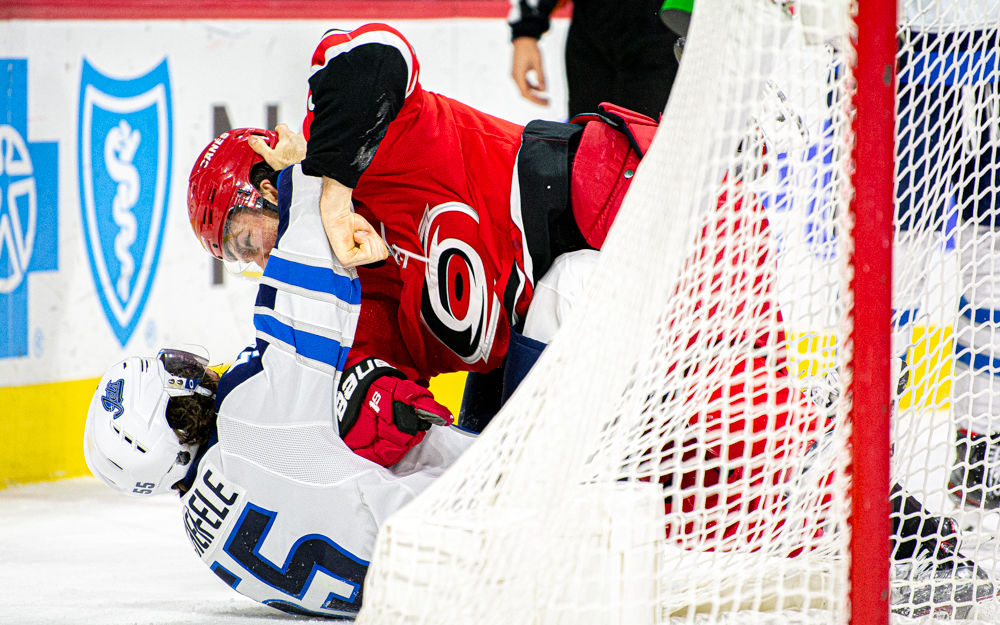 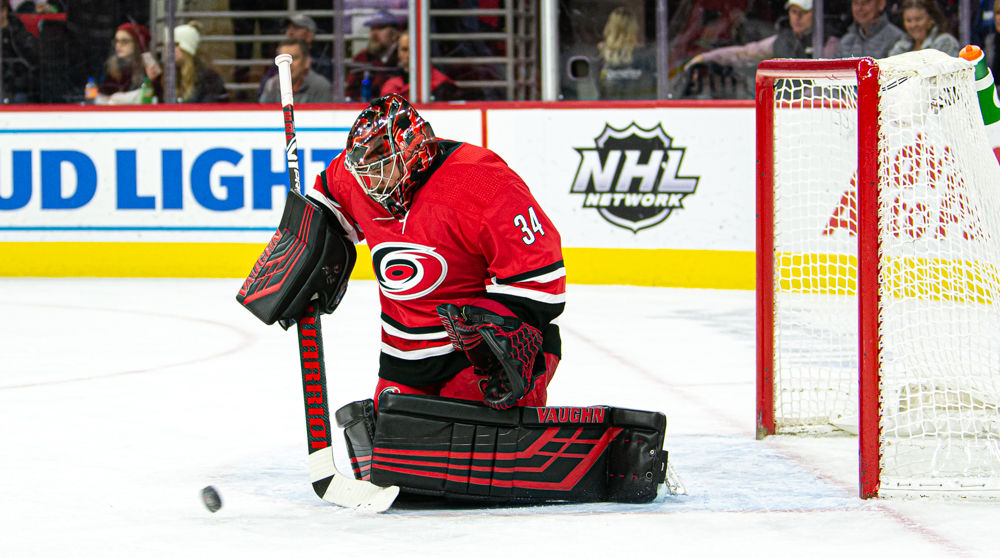 Carolina Hurricanes goaltender Petr Mrazek makes a save against the Winnipeg Jets on Tuesday, Jan. 21 at PNC Arena. Mrazek saved 16 of the 17 shots he faced as Carolina won 4-1.

Carolina Hurricanes goaltender Petr Mrazek makes a save against the Winnipeg Jets on Tuesday, Jan. 21 at PNC Arena. Mrazek saved 16 of the 17 shots he faced as Carolina won 4-1.

In one game, Carolina managed to address two of the issues that had been plaguing the team: Physicality and scoring.

Andrei Svechnikov and Brett Pesce each took a turn putting Winnipeg’s Mark Scheifele in his place and then two goals by Justin Williams led the way as the Carolina Hurricanes grounded the Winnipeg Jets 4-1 Tuesday night at PNC Arena.

“You lose a player like Dougie [Hamilton], I don’t think you’re going to pick it up offensively,” said head coach Rod Brind’Amour in regards to Hamilton’s broken leg. “Our D-core’s been doing what they have to do, picking up slack here and there and finding ways to get it done. It’s what we have to continue to do.”

While the overall hits for the game were heavily skewed in the Jets’ favor, 26-9, the physical plays that people will remember are first Svechnikov throwing Scheifele down after Scheifele went after him and then Pesce tuning him up after Scheifele again instigated the altercation. Not a great night for Scheifele.

It was a pretty good showing for Pesce in his first career NHL fight.

When asked who taught him how to fight, Teuvo Teravainen responded, “Not me.” Martin Necas also had a bit of a laugh on Pesce’s fight.

“It’s the first time I’ve seen it from him so far,” Necas said. “The guys were laughing. It was kind of funny, but good for him.”

The second area of improvement for Carolina was the offense. The Hurricanes scored the most goals in a game since Jan. 7 (a 5-4 OT win over the Philadelphia Flyers), and three different skaters filled out the stat sheet.

The first goal was fast, much like its scorer. Necas treated fans to another display of his ridiculous skating as the potential Calder Trophy nominee blew past everyone and skated the puck in alone and through the crease, tucking it in past Winnipeg netminder Connor Hellebuyck.

“The play was just in my head,” Necas said. “For me, that was the only option to do. He closed the short-side and there was a space to go backhand.”

Then, it was Williams who finally scored his first official goal in only his second game back. With centerman Erik Haula a healthy scratch, Williams found himself on the first power-play unit and, more importantly, in the perfect spot to redirect a Teravainen feed.

The Jets flew right back down the ice and it was Patrik Laine alone in the slot who cut the deficit.

“I thought they had a really good push after we scored the first couple of goals and not to be a downer at all, but we need to be more composed,” Williams said. “In the second period especially. Petr [Mrazek] shouldn’t have to make the saves that he had to today, but he did and we won.”

But as the period wound down, the Canes picked up one more and this time it was Teravainen on the receiving end of a pretty pass for once.

It all started with Winnipeg defenseman Luca Sbisa mishandling a high clear and Sebastian Aho taking over. Aho grabbed the puck out of Sbisa’s feet, rushed down the ice, put a backhand on Hellebuyck, picked up his own rebound, put the brakes on to let Sbisa blow past him and then he fed Teravainen right in the slot for the perfect top-corner snipe.

Williams, seemingly having already warmed up to the NHL game, got on the score sheet again. As a pretty bad Canes power play expired, Carolina managed to charge back up the ice on a great zone entry and it was Svechnikov who fed a cross-ice feed to the storming Williams knocking it home.

Williams had a multiple chances for the hat trick, but couldn’t get a few great chances to go and the Canes would go on to win.

“The third period was great,” Williams said. “We addressed some things after the second and the third was great. We didn’t give them too much and when we did Petr was great.”

Special teams again came up big for the Hurricanes, but mostly it was the penalty kill which went perfect again, this time going 4 for 4 on the kill. The power play was timely, capitalizing early by scoring on its first appearance, but past that it left a bit to be desired.

The obvious talking point is the dominant performance by Justin Williams. With two goals, one on the power play and one at even strength, at even less ice time than last game (11:45 tonight as opposed to 13:06 in his first game), do we see him move up the lineup?

Brind’Amour has stated that he is happy with how the lines have played, but he made a pretty major shuffle taking Haula out of the lineup and moving Lucas Wallmark to third-line center. If Williams continues to shine, it isn’t unlikely that we see him get a crack with Aho or Staal in the return from the All-Star break.

Williams himself is still kind of skeptical on his return, but he has never been one to praise himself.

“If you ask anybody, I got a ways to go and I certainly feel that as well,” Williams said. “Things just kind of ended up on my stick today. I was the beneficiary of a couple of really great passes and I just happened to have my stick on the ice. I’m feeling comfortable, feeling better than I did last game and hoping to feel better the next game.”

Brind’Amour had a bit of a different take on Williams though.

“He is a good player,” Brind’Amour said. “Obviously he had a good game tonight. Came up with some big goals for us, which we needed. It’s not really unexpected of him. He knows how to play and I don’t care how old you are, if you know how to play, if you know where to go… That’s what he does. It’s not surprising to me.”

The Canes now will be off for 10 days for the All-Star break. Defenseman Jaccob Slavin will be filling in for Dougie Hamilton, who is out with a leg injury, and the next game will be Jan. 31 against the Vegas Golden Knights at PNC Arena.