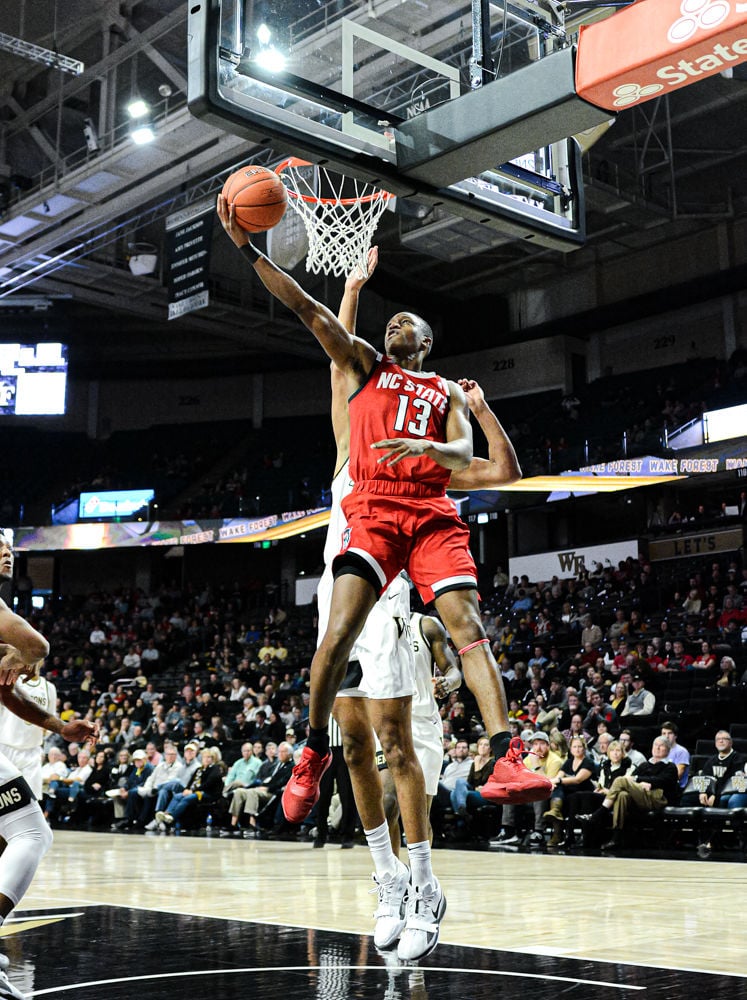 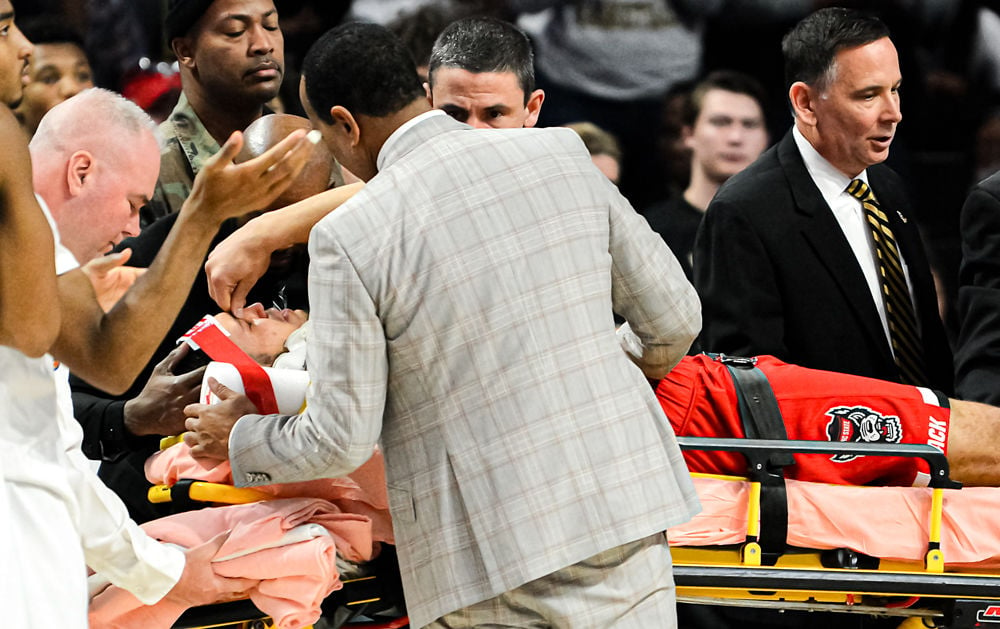 Medical staff and head coach Kevin Keatts tend to sophomore forward Jericole Hellems during the game against Wake Forest on Saturday, Dec. 7 at Lawrence Joel Veterans Memorial Coliseum. Hellems fell and hit the back of his head on the court while fighting for a rebound. Before the injury, Hellems scored 13 points and the Wolfpack ended up winning 91-82.

Medical staff and head coach Kevin Keatts tend to sophomore forward Jericole Hellems during the game against Wake Forest on Saturday, Dec. 7 at Lawrence Joel Veterans Memorial Coliseum. Hellems fell and hit the back of his head on the court while fighting for a rebound. Before the injury, Hellems scored 13 points and the Wolfpack ended up winning 91-82.

“I thought our guys did a tremendous job, coming in here on the road, getting a good road win,” said NC State head coach Kevin Keatts. “When you think about the fact that we felt like the opening game of the year we gave away an ACC game, I talked to the guys about going on the road, and we had to figure out a way to get one back.”

NC State started off the game 4 for 4 from the 3-point line, racing out to an early 14-4 lead and setting the tone for an afternoon of scorching-hot shooting. All four buckets came in succession as senior guard Markell Johnson, redshirt senior guard C.J. Bryce and redshirt junior guard Devon Daniels each got one, then Johnson capped off the run with another following a slick steal by graduate forward Pat Andree.

“We believe in each other, and we believe everybody is going to get the shots they shoot,” said junior guard Braxton Beverly. “It’s something we work on every day. Everybody has confidence in each other.”

The Wolfpack finished the first half 7 of 12 from downtown, using its efficiency from deep to offset an inability to get to the free-throw line; NC State didn’t record a single free-throw attempt in the first half. The Pack’s strong defense also helped bolster its offense, as NC State forced 12 turnovers and scored 15 points off the Deacs’ miscues, leading to a 37-22 advantage in shots.

Despite earning a 45-36 lead at the half, the Wolfpack’s performance was marred by some inexplicable fouling issues. NC State put Wake Forest in the bonus with 10 fouls, giving the Deacons eight points off free throws.

NC State opened the second half much the same way as the first half, firing away from beyond the arc. Sophomore forward Jericole Hellems hit two 3-pointers in the opening minutes of the half, and after the second deep ball gave NC State a 15-point lead, the Wolfpack largely held the Deacs at arm’s length the rest of the game.

Finally, NC State’s first free throws came with 6:38 remaining in regulation, when C.J. Bryce was fouled on a floater in the paint. Bryce missed the first free throw but made the second, spoiling Deacons fans’ hopes of free Chick-Fil-A and ensuring the Wolfpack wouldn’t play an entire game without a made free throw.

The Wolfpack had one of its most balanced games of the season. Led by Bryce’s 18 points, six players scored double-digit points. Beverly (15), Johnson (14), Hellems (13), Daniels (12) and redshirt junior forward D.J. Funderburk (11) all scored at least 10 points. Beverly, Hellems, Daniels and Johnson were also lights-out from the 3-point line, combining to shoot 11 for 15 from deep.

“We weren’t really concerned about missing,” Daniels said. “We were just taking the open shot, and it started us off well. We got in a flow really early and kept it the whole game.”

As the game wound down and Wake Forest scrambled to come back, Hellems was knocked down and suffered a nasty fall. Play stopped for a little over 10 minutes as medical staff took a look at Hellems. While LJVM Coliseum was deathly quiet, Hellems was stretchered off the court and taken to a local hospital. The St. Louis, Missouri native, who set consecutive career highs in points the Wolfpack’s last two games against Memphis and Wisconsin, was reported by NC State Athletics to be alert and being evaluated for a lower back injury and concussion.

Next up, the Wolfpack will travel once again in-state to take on UNC-Greensboro next week. The game tips off at 3 p.m. Dec. 15 inside Greensboro Coliseum.

By the numbers: men’s basketball vs. Wake Forest

WINSTON-SALEM, N.C. — The NC State men’s basketball team picked up its first ACC win of the season Saturday afternoon, beating Wake Forest 91-82 on the road in Winston-Salem. Here are some of the important numbers from Saturday’s game that won’t show up on the average box score.

I'm Tristan Tucker, a sports staff writer in the class of 2022 studying Communication Media. I joined Technician in Fall 2018 and also write for FanSided, Porter Medium, and am a broadcaster at PackTV.