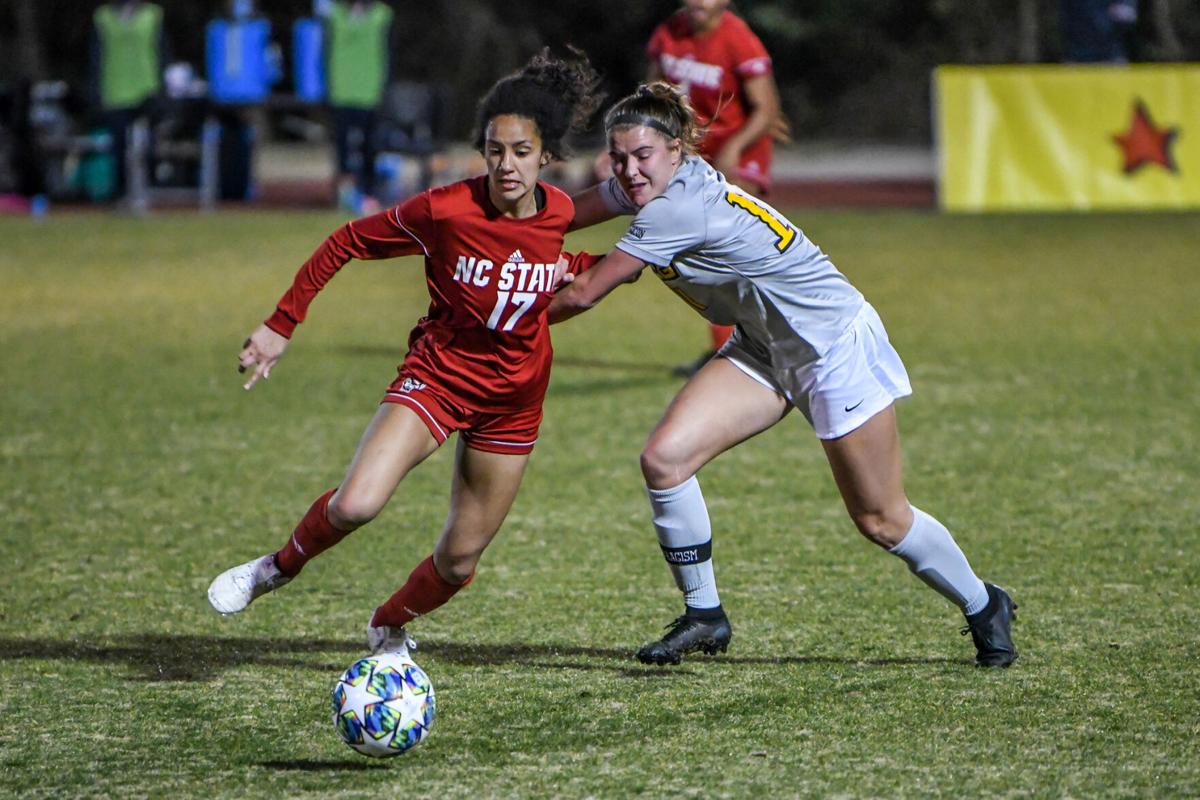 Senior midfielder Mikhail Johnson fights to get to the ball during the game versus UNCG on Wednesday, Feb. 24, 2021 in Dail Soccer Stadium. The Wolfpack tied the Spartans 0-0 following two overtime periods. 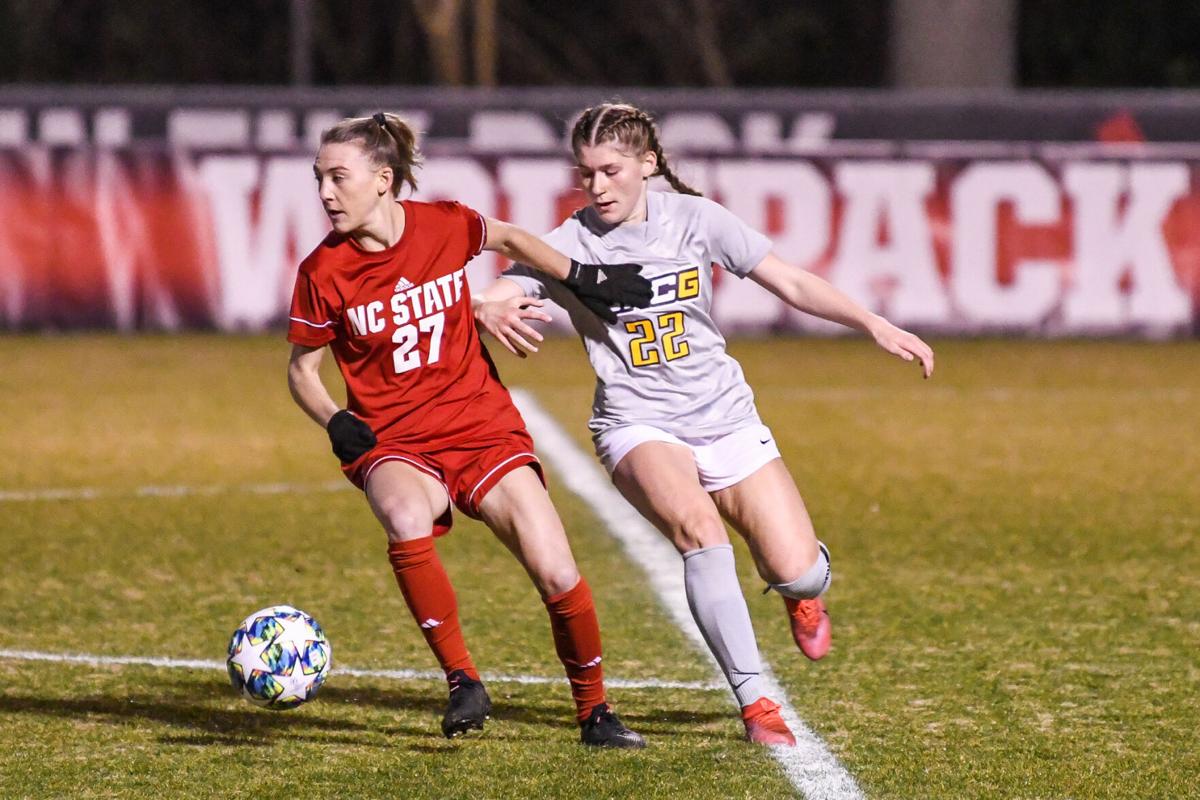 Senior midfielder Mikhail Johnson fights to get to the ball during the game versus UNCG on Wednesday, Feb. 24, 2021 in Dail Soccer Stadium. The Wolfpack tied the Spartans 0-0 following two overtime periods.

A hundred and 10 minutes of soccer proved to not be enough to separate the NC State women’s soccer team and UNC-Greensboro as the two saw out a scoreless draw in a closed-door match on Wednesday, Feb. 24.

The Wolfpack (3-0-1) managed 20 shots, including a very close shot in overtime from sophomore forward Jameese Joseph, but only three tested the Spartans’ (0-1-1) keeper.

“Best game we have played so far out of the four,” said head coach Tim Santoro. “It is the one we haven’t won but with the way we played, we just didn’t have enough quality in the final 20 yards, but we were really good for a large part of that game. We’ll just have to be better around the goal.”

After starting each of its first three games in a three at the back, the Wolfpack started the game in a different formation with Santoro starting his team with four across the back and a double pivot in midfield.

“We wanted to add another player in a deeper role to help in the build-up and that frees up our backs to get in and attack more,” Santoro said. “It’s where we were most comfortable and it showed tonight. We were really good for large stretches.”

The change in formation also saw the return of Joseph, who made her first appearance since going down with an injury in the team’s 2-0 season-opening win over Old Dominion.

“She looked a little rusty,” Santoro said. “She just came back into training so she wasn’t as sharp as she would’ve been if she had played all the games, but she has got a lot to her game so that she was still pretty dangerous. She just needs a little more quality, but she’s an important player for us.”

Joining Joseph in attack were junior forward Denae Antoine, who was leading the line, and sophomore forward Leyah Hall-Robinson, who lined up wide on the left. Junior midfielder Toni Starova occupied the No. 10 role just behind Antoine.

The Wolfpack controlled the opening 45 minutes of the game, outshooting its opponents 7-3, but none of the Pack’s chances were particularly threatening.

Starting in the 64th minute, the two sides exchanged a flurry of chances with the game running end to end for a large segment of the second half.

The best of those chances fell to Hall-Robinson in the 64th minute. Freshman defender Cara Elmendorf cleared a UNCG corner down the line, and Joseph got on the end of it. Joseph played Hall-Robinson in behind, but the Spartans’ keeper did a good job to close out the angle, and Hall-Robinson was not able to get a good shot away.

After 90 minutes of scoreless soccer, the two squads played the draw through extra time, as neither side managed to break the deadlock.

Senior midfielder Mikhail Johnson got the first start of her career against the Spartans, playing alongside sophomore midfielder Jaiden Thomas at the base of midfield.

“It was good for her to play from the beginning,” Santoro said. “She’s given us some good minutes off the bench so far, but she’s been doing really well in training. I thought she would fit in the game well and she did. That is what you want from players who are looking to have bigger roles than they have in the past. That is what we are using this spring for. To see who can step forward and add something that we haven’t had in the past.”

Freshman keeper Maria Echezarreta recorded the third cleansheet of her Wolfpack career. In four starts, Echezarreta has conceded just once.

In addition to her shot stopping, the Spaniard has been a vocal leader from the back, helping to organize the back line. Echezarreta is not the only vocal leader in the Wolfpack’s back line with the freshman forming a very knowledgeable duo with redshirt junior defender Lulu Guttenberger.

“You need that leadership in the back and it is not just leadership it is knowledge,” Santoro said. “Those two know the game. The stuff they are saying is right. Having those two so close together with a great view of the field, it is a great presence to have.”

The Wolfpack will be back in action on Saturday, Feb. 28, for its first road test of the season, traveling up to Virginia to face 3-0 VCU, who will be in action on Thursday, Feb. 25, for one more game before playing the Pack.

“It was good to have a couple of home games to start off with because we have not really played in a long time...” Guttenberger said. “Now going on the road to VCU is going to be a very tough game. But it is going to be exciting. We have something to prove. I am excited to play them. They are a really good team and I am really looking forward to it.”