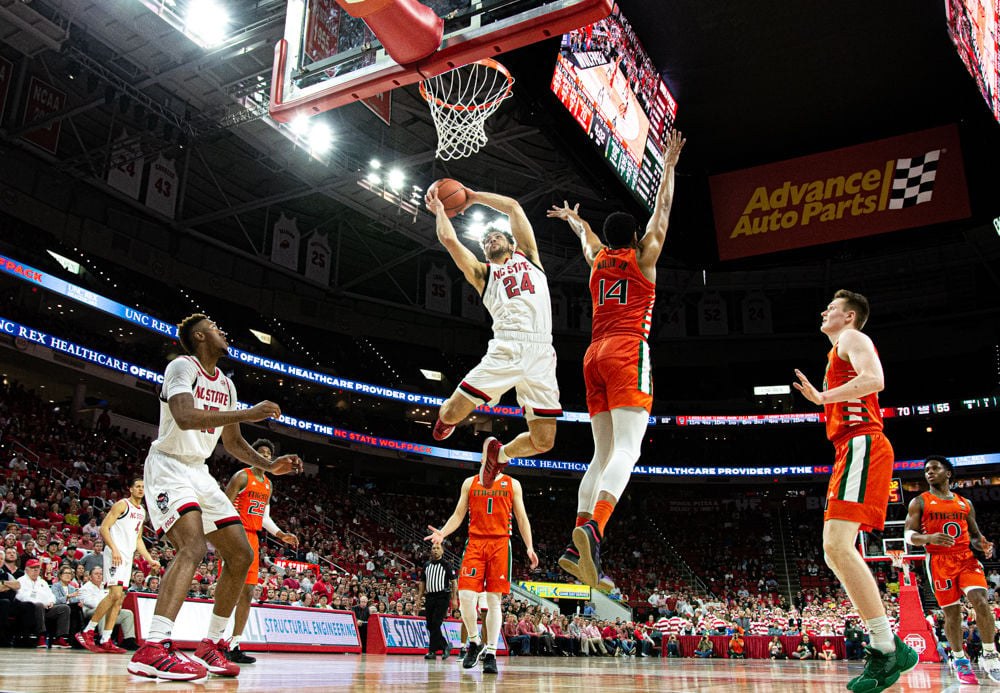 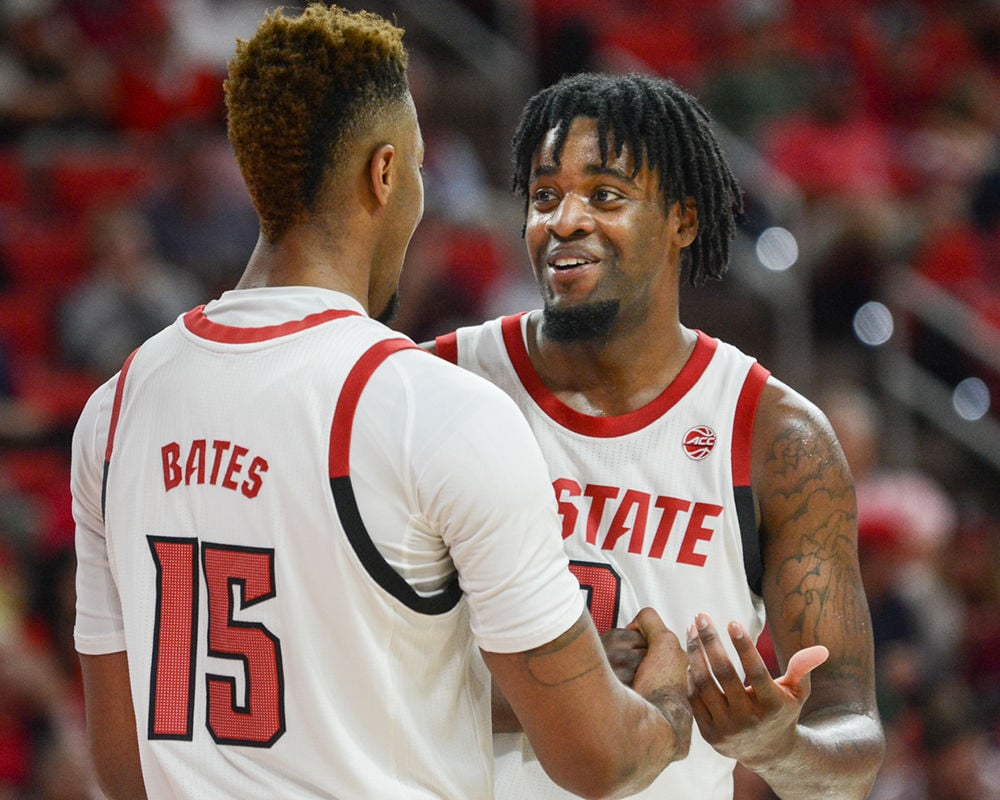 Redshirt junior DJ Funderburk questions a foul call to redshirt freshman forward Manny Bates during the game versus Miami on Wednesday, Jan. 15, 2020 in PNC Arena. Funderburk was the Wolfpack's top scorer with 19 points against Miami. The Wolfpack beat the Hurricanes 80-63. 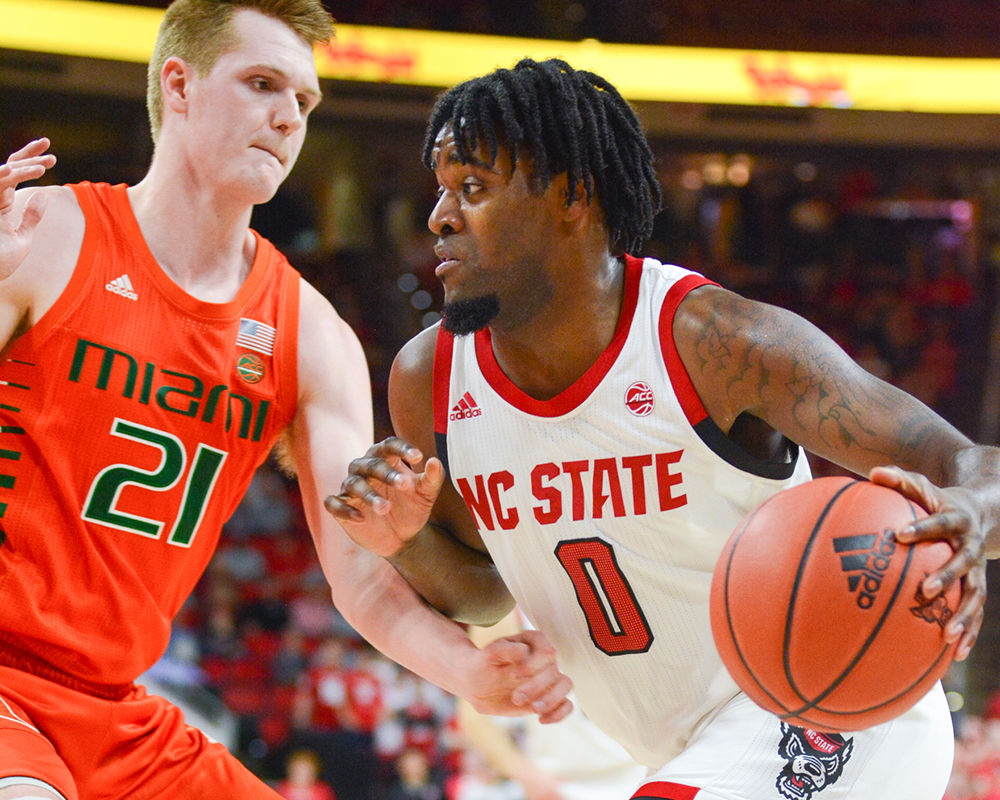 Redshirt junior forward DJ Funderburk drives to the basket during the game versus Miami on Wednesday, Jan. 15, 2020 in PNC Arena. Funderburk was the Wolfpack's top scorer with 19 points and 8 rebounds. The Wolfpack beat the Hurricanes 80-63.

Redshirt junior DJ Funderburk questions a foul call to redshirt freshman forward Manny Bates during the game versus Miami on Wednesday, Jan. 15, 2020 in PNC Arena. Funderburk was the Wolfpack's top scorer with 19 points against Miami. The Wolfpack beat the Hurricanes 80-63.

Redshirt junior forward DJ Funderburk drives to the basket during the game versus Miami on Wednesday, Jan. 15, 2020 in PNC Arena. Funderburk was the Wolfpack's top scorer with 19 points and 8 rebounds. The Wolfpack beat the Hurricanes 80-63.

After a disappointing performance in its last game, the NC State men’s basketball team used hard-nosed defense and hot shooting in the second half to defeat Miami 80-63 Wednesday night in PNC Arena.

Despite struggling offensively for the majority of the first half, NC State shot 64.3% from the field in the second half, including six made three-pointers, as they built up a lead that was too much for the Hurricanes to fathom.

Redshirt junior D.J. Funderburk was the man of the hour for the Wolfpack (12-5, 3-3 ACC). The Cleveland native finished with 19 points and eight rebounds in a new starting role.

“I just think he's playing to his potential,” said NC State head coach Kevin Keatts. “He's starting to play with confidence; he even hit a three.”

Redshirt junior Devon Daniels was next in line offensively for NC State, with 15 points on 7-for-11 shooting.

Two inside flushes from Miami (11-6, 2-4 ACC) big man Rodney Millard Jr., with no defense to be found in the paint, to start the game let the Hurricanes jump out to an early five-point lead.

NC State struggled shooting in the first few minutes, missing its first five shots, but an and-1 layup from senior guard Markell Johnson and a nice drive inside from Daniels got the Wolfpack going offensively to tie the game at seven.

Miami jumped back out to a 14-9 lead after Chris Lykes knocked down a 3-pointer while being fouled, silencing the PNC Arena crowd.

NC State missed its first three 3-point attempts, then senior forward Pat Andree finally made one to tie the game at 14-14.

In what was a back-and-forth first half, Johnson tied the game up again at 17-17 after making a tough finish to the hoop.

It was not until junior guard Braxton Beverly and sophomore forward Jericole Hellems made some big 3-point shots that NC State took its first lead of the game.

After a few more points scored from Daniels and Hellems, the Wolfpack ended the first half on a 10-0 run to take an eight-point lead into halftime.

Funderburk and Johnson each had seven points at the break to lead the Wolfpack, while Lykes had 10 points to lead the Hurricanes.

After Miami started the half with a small 4-0 run, NC State opened up its scoring with a corner 3 and two free throws from Funderburk. Bates continued to build on NC State’s lead with a jam off of a lob from Daniels.

NC State started out the second half hot from beyond the arc, making three of four in the first five minutes after Johnson and Hellems got in on the action.

“We were all just having fun,” Funderburk said. “When we got going in the second half, it was kind of deadly.”

Miami wouldn't back down though, as the Hurricanes took advantage of NC State fouls and drilled seven free throws early on in the second half to stay in the game.

Redshirt senior guard C.J. Bryce, in his first action in four games (concussion protocol), got his first bucket on a pull-up jumper to give NC State a 52-40 lead, right before the under-12 media timeout. This was part of a seven-of-nine shooting run from the Wolfpack.

“I was glad to get C.J. back,” Keatts said. “Not just because he is our leading scorer, but it's good to have him in the locker room.”

Bryce got the PNC Arena crowd rocking when he sent his defender sliding before hitting another jumper, pushing the Pack lead to 56-44.

Teams traded buckets and a free throws for four minutes, but a turnaround hook shot from Funderburk and a hard drive to the rim from Daniels gave the Pack a 67-50 lead to all but put the game away for NC State.

To put the icing on the cake, Daniels hit a dagger 3-pointer to extend the NC State lead to 20, sending PNC Arena into a frenzy.

The two teams would trade buckets in the final few minutes, including one from graduate forward Danny Dixon and a 3-pointer from freshman forward Max Farthing. In the end, NC State would finish the game 80-63, a dominating performance from the Pack over the Hurricanes in a statement win that will give State some much-needed footing in the ACC.

NC State will be back in action Saturday at PNC Arena for a grudge match against Clemson, with a 2 p.m. tip-off. The Wolfpack will look to avenge an 81-70 loss from Jan. 8. Follow @TechSports for live updates.