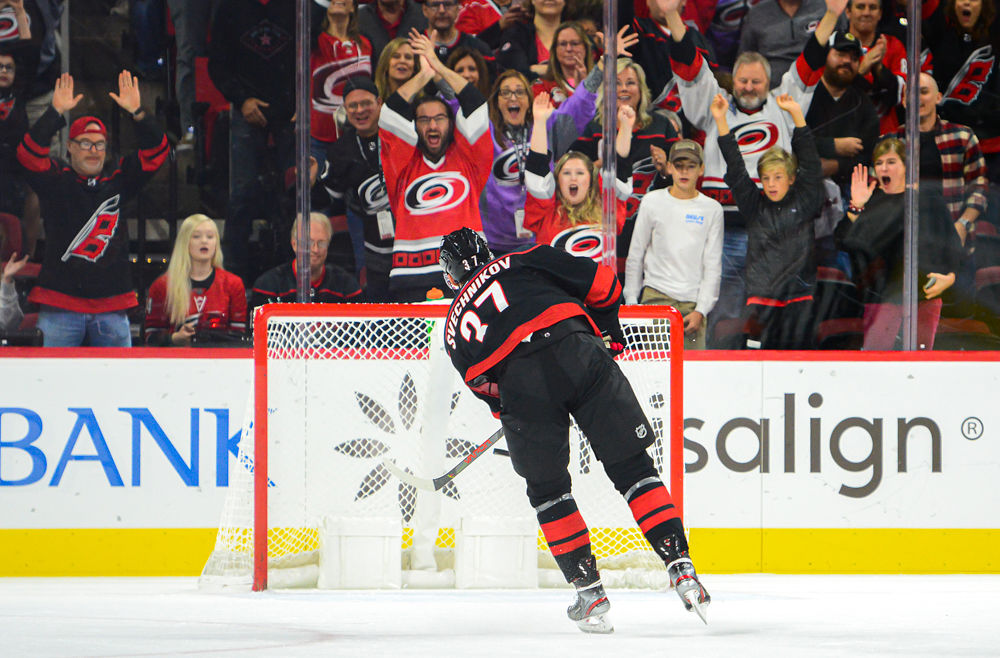 Hurricanes right wing Andrei Svechnikov scores an empty net goal against the New York Islanders on Friday, Oct. 11 at PNC Arena. Svechnikov totaled one goal and one assist as the Hurricanes won 5-2. 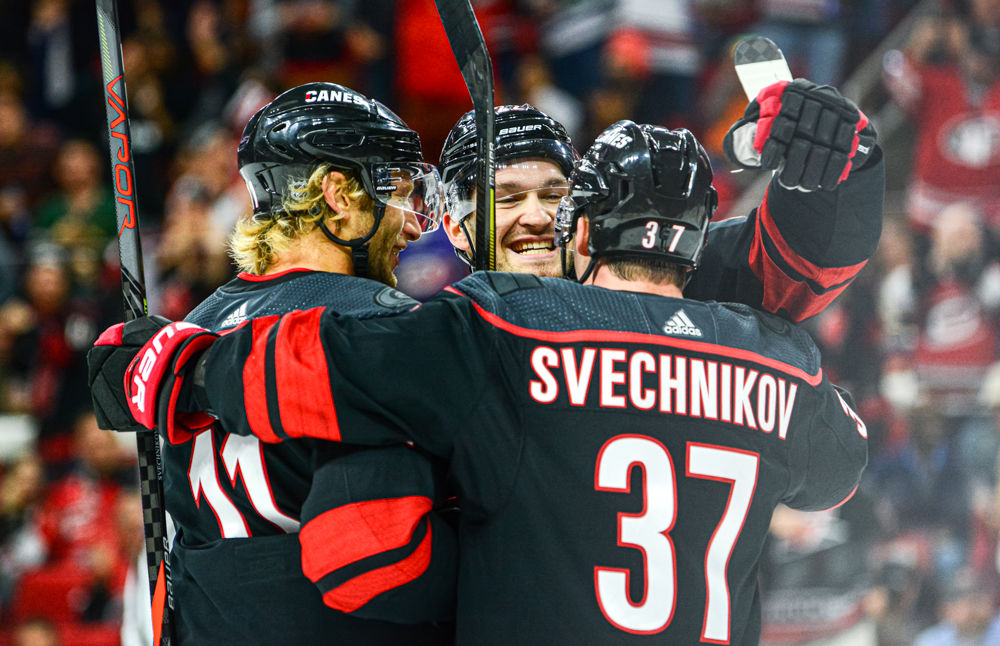 Hurricanes center Jordan Staal, defenseman Brett Pesce and right wing Andrei Svechnikov celebrate a goal against the New York Islanders on Friday, Oct. 11 at PNC Arena. The three combined for four points on the night as the Hurricanes won 5-2. 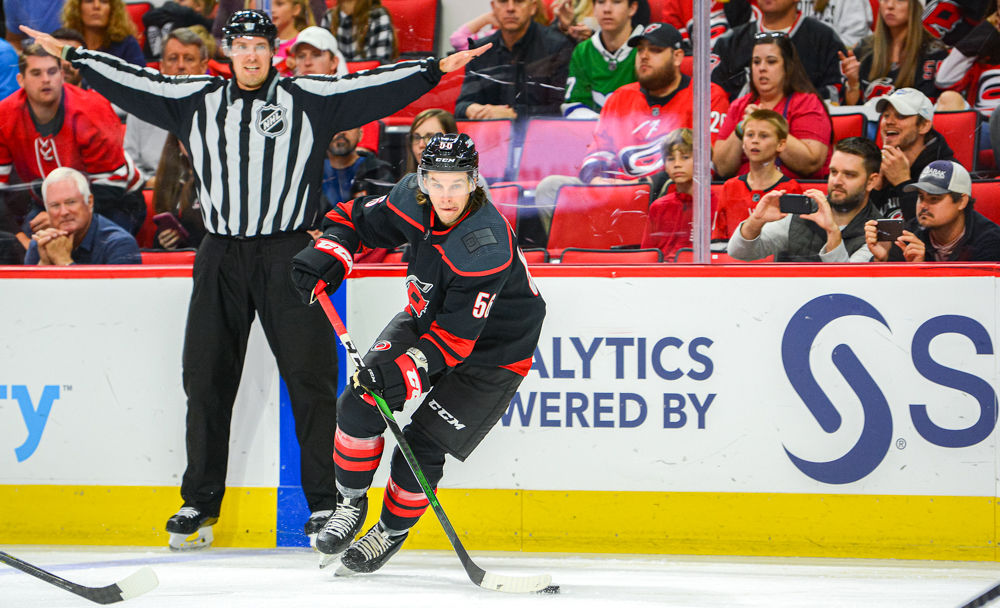 Hurricanes right wing Andrei Svechnikov scores an empty net goal against the New York Islanders on Friday, Oct. 11 at PNC Arena. Svechnikov totaled one goal and one assist as the Hurricanes won 5-2.

Hurricanes center Jordan Staal, defenseman Brett Pesce and right wing Andrei Svechnikov celebrate a goal against the New York Islanders on Friday, Oct. 11 at PNC Arena. The three combined for four points on the night as the Hurricanes won 5-2.

The Carolina Hurricanes defeated the New York Islanders by a final score of 5-2 to set a new franchise record for best start to a season at 5-0-0.

The Canes scored first and last as the high-powered offense kept chugging along in a dominant performance over the Islanders (1-3-0). Outshooting the Isles 40-19, the Canes only area of falter was the lackluster start of their penalty kill. The Islanders scored on the first two power plays they had, but the Canes managed to shut them down on their next three.

“I’m not complaining about anything,” said head coach Rod Brind’Amour. “I thought from start to finish we were ready to play. We knew it was going to be a tough game and the guys dug in. We had a couple of moments on the penalty kill we would probably like to have back, but overall, it was a good effort by the group.”

With the win, the Canes are still one of only five undefeated teams left in the NHL for this season. With all of those teams, including Carolina, in action tomorrow Oct. 12, that number could drop.

The home team struck early, as has become per usual, when Dougie Hamilton set up Teuvo Teravainen for an easy tap-in goal just 3:57 into the game. With a poke check at the Canes’ blue line, Hamilton took the puck up the ice for a 2-on-1 rush where he faked the shot and laced it straight to Teravainen’s tape.

The Islanders got one right back, however, as they scored just eight seconds into their first power play. The Canes had had a major breakdown on defense and Brock Nelson was left alone right in front of Petr Mrazek to counter with a tap-in goal of his own.

Not to be stopped, Carolina’s high-flying offense struck right back as Andrei Svechnikov won the puck along the boards and fed defenseman Brett Pesce who was cheating down below the circles where he squeezed the puck through Thomas Greiss.

“It was a great play by Svech,” Pesce said. “For one, I kind of saw that they were a little scrambled, their forwards, and I saw Svech get the puck and I kind of just rovered around and he made a great play and I found the net.”

The second period saw a myriad of penalties called each way but the majority went against the Canes. The Islanders tied the game on their second power play as Johnny Boychuck blasted a slap shot from the blue line cleanly past Mrazek with no traffic out in front.

The Hurricanes managed to kill off the rest of the penalties assessed their way and rode that momentum to another goal. This time, Erik Haula came up big as he did it all, taking the puck down low along the boards, getting separation and driving to the net where he picked up his own rebound and scored.

“We saw this when we went to go get him,” Brind’Amour said on Haula’s ability. “He missed all of last year, but he’s playing really hard. I think maybe surprising is the two-way player he is. He’s really digging in on both ends of the rink which is obviously what we love. He’s getting results right now, which I think is him getting rewarded for his level of play.”

A few minutes later, Hamilton hopped onto the scoresheet’s goal column as he ripped a one-timer, fed to him from Nino Niederreiter, straight to the back of the net to give the Canes a two-goal lead with under a minute to go in the second period.

With his goal, Hamilton brought his season total up to three. Along with Hamilton, defenseman Jaccob Slavin has two as does Pesce, and new defenseman Jake Gardiner even has a goal. The defensemen have accounted for eight of the Hurricanes 21 total goals this season and they don’t look like they will be slowing down anytime soon.

“Our staff is giving us free reign to kind of play however we want to in the other zone as long as we are responsible,” Pesce said. “So kudos to them for giving us that opportunity and obviously we are taking advantage of it.”

Carolina then dominated the entirety of the third period, holding the Isles to only two shots on net in the final 20 minutes. The Hurricanes rode that dominance to the end of the game with a little insurance by Svechnikov who deposited an uncontested empty-net goal in the closing seconds.

“I just like the way guys are coming to work every day,” Brind’Amour said. “The 5-0 is kind of irrelevant because it’s trying to win the day and that’s the mentality these guys have had and will need to continue. That’s what we are trying to sell here and they are so far buying into it, so it’s good.”

The Hurricanes will remain at home to play the second half of its back to back against the Columbus Blue Jackets tomorrow, Oct. 12 at 7 p.m.