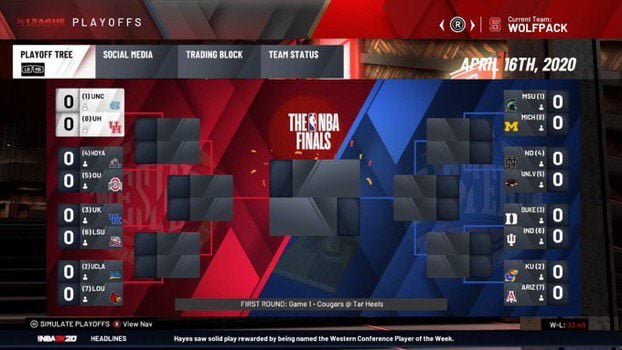 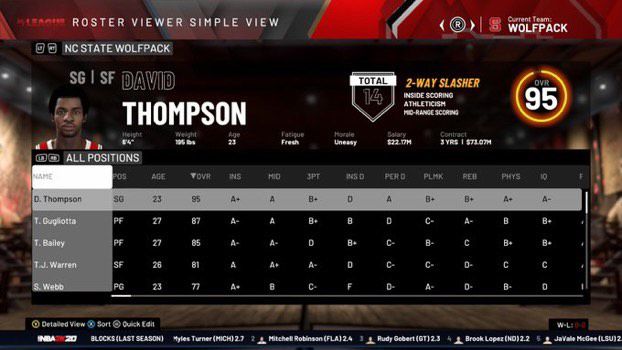 Without sports, many fans are turning to the sports video games to bring them joy in these desolate times. This time is also giving fans time to contemplate sports what-ifs and look back on the past, so I figured I would combine the two and see what happened if every college’s all-time best professional players played against each other in an 82-game season, and to see how the NC State Wolfpack would stack up against these teams.

I decided to simulate a season on the game mode “MyLeague” using a user-created roster but wanted to put my own twist on things. The user I downloaded the roster from used two teams that were not in the NCAA, an all-time high school team featuring LeBron James, Kobe Bryant, Kevin Garnett and more, and another that was an all-time overseas team that included Dirk Nowitzki, Luka Doncic, Manu Ginobili and others. I thought this was not fair, so I put Houston, NC State’s competitor in the 1983 Championship Game, and Florida State, an ACC rival, into the league.

Unfortunately, 2K does not have the rights to all the best players from those teams over the years, so players like North Carolina’s Tyler Hansbrough were not included.

To make the playing field even for all 30 teams, I turned off team chemistry, rule changes, CPU-CPU trades and offers, injuries and turned the draft class quality down to zero.

In the preseason, NBA.com’s power rankings had NC State ranked seventh, ahead of the likes of UNC-Chapel Hill, Kansas, Kentucky, Louisville, Georgia Tech, Duke, Syracuse and Florida State. This proved to be a poor indicator of how the season would go, though, as UNC-Chapel Hill would go on to win 72 games behind the likes of Michael Jordan and Vince Carter.

The Wolfpack started off well enough, winning a handful of games, but the team could never quite find its footing and teetered between getting blown out by some of the elite teams in the simulation, and knocking out the lesser teams.

About mid-way through the season, the Pack made a push for the playoffs, but plateaued at the ninth seed, and veered off the rails after a huge Duke win, that saw the 5-foot-7 Webb drop 22 points against a Duke team that had Grant Hill, Jayson Tatum, Zion Williamson and Kyrie Irving. Webb also posterized three Duke players on one electric dunk and rose up numerous times in the game. Meanwhile, Gugliotta dropped 16 points and 10 rebounds, while Thompson added 15 points and four assists.

The NBA All-Star Game was also around this time, and Thompson was scoring over 28 points per game, which led to his inclusion in the All-Star Game, along with Texas’s Kevin Durant and UNC’s Jordan.

Unfortunately for NC State, the team could not win many more games, and lost the season series against Chapel Hill, not winning any games against the Tar Heels. The Wolfpack finished 33-49, good for the 11th seed in the conference they were put into. Other notable finishes included Villanova, who finished 20-62, Michigan State who went 62-20 led by Magic Johnson, Washington, who finished with an abysmal 12-70 record, UNC, who won 72 games, tying the 1995-96 Chicago Bulls for the second-best record of all time and UCLA, who won 71 games.

It was not all bad news for the Pack, however, as Thompson finished the season as the fourth-highest scorer in the league, coming in at 28.6 points per game, only behind LSU’s Shaquille O’Neal at 29.2 points, Notre Dame’s Adrian Dantley at 29.5 points and Texas’s Durant at 31.5 points.

Thompson also poured in 9.5 total rebounds, 4.8 assists, 1.4 steals, 2.1 blocks and just 2.2 turnovers in 36 minutes per game. Thompson shot at a wild 61% field-goal percentage, along with shooting 35% from 3 on nearly four attempts per game and 87% from the charity stripe. NC State’s all-time best player also held opponents to 47% shooting and notched 42 double-doubles en route to being named to the All-NBA First Team, alongside Magic, Wake Forest’s Tim Duncan, Michigan’s Chris Webber and O’Neal.

Thurl Bailey had an impressive season, putting up 20.9 points, 7.2 rebounds, five assists and 1.1 steals per game while putting up 17 double-doubles and one triple-double. Gugliotta and Warren each played well for the team, with Gugliotta adding 15.7 points and 10.5 rebounds per game. Warren scored 14.4 points per game and shot 46.7% from the floor.

Outside of this quartet, the rest of the team had a rough going. Smith averaged 9.3 points but shot an awful 40% from the field, along with 27% from 3 and 54% from the free-throw line. Webb put up 7.4 points per game but was often shut down inside due to going up against larger opponents at the position.

McMillan put up six points, 4.4 rebounds and 5.8 assists as a starter, but shot poorly from the floor, while Del Negro and Lorenzo Brown played under 20 minutes per game. To make matters worse for the Pack, Roy Williams won Coach of the Year for UNC.

In the playoffs/NCAA Tournament that spontaneously decided to become a best-of-seven series, UNC swept Houston and defeated Georgetown en route to the Final Four. UCLA, UNLV and Kansas were the other three teams to make it to this point. The Wilt Chamberlain-led Jayhawks swept the Larry Johnson-led Runnin’ Rebels to make it to the championship, where they were set to face UCLA, who knocked out Chapel Hill in six games.

The series between the two titans was a nailbiter, but ultimately Kareem Abdul-Jabbar and Russell Westbrook of UCLA were able to pull it off and take home a national championship. Westbrook won the NCAA Basketball Tournament Most Outstanding Player Award after averaging 19.1 points, 12.7 assists and 7.9 rebounds per game.

While the season did not end the way the team wanted it to, NC State fans can rest assured that their best all-time players in 2K held their own against the best to ever do it, and seeing Thompson put up astounding numbers is impressive.