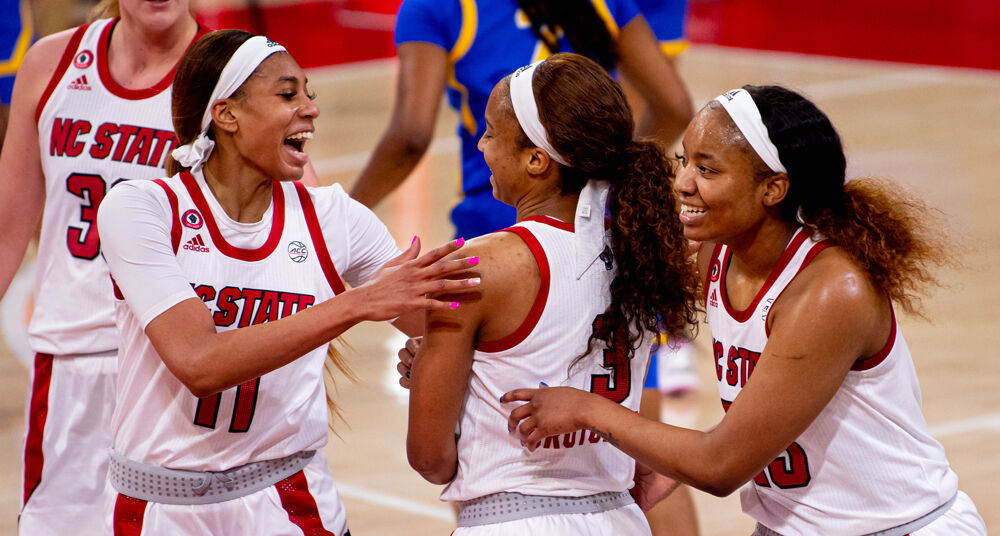 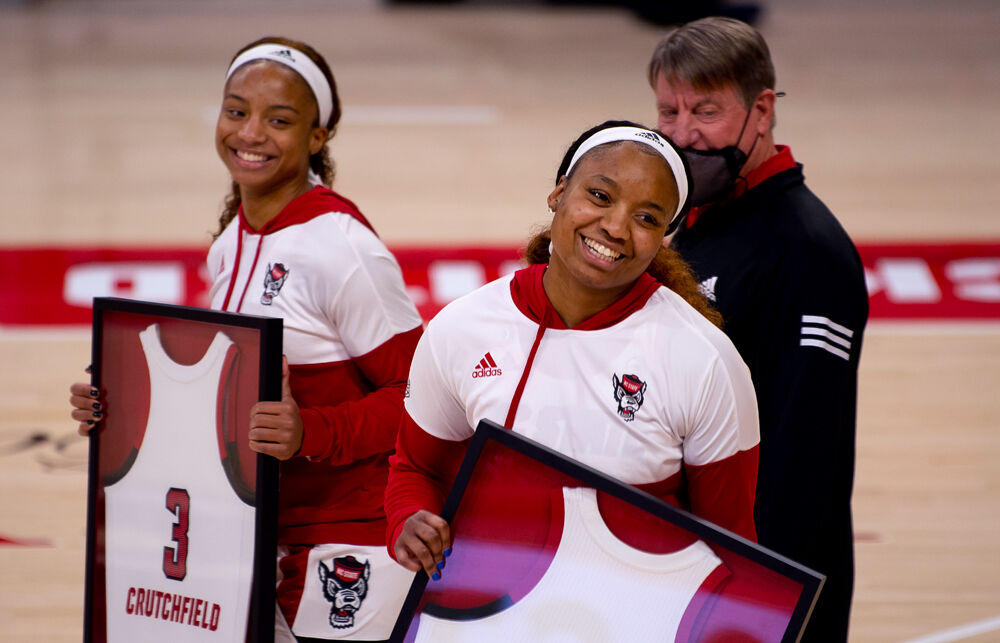 Senior guard Kai Crutchfield and senior forward Kayla Jones pose for photos before their last home game on Thursday, Feb. 25, 2021 at Reynolds Coliseum. The seniors combined for 21 points as the Wolfpack won 83-53. 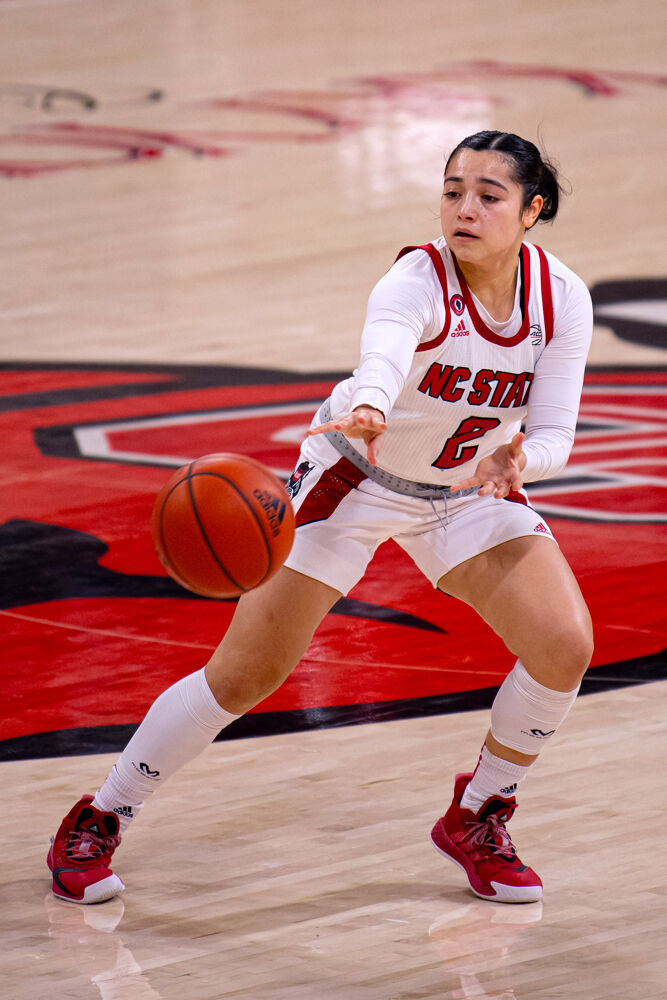 Senior guard Kai Crutchfield and senior forward Kayla Jones pose for photos before their last home game on Thursday, Feb. 25, 2021 at Reynolds Coliseum. The seniors combined for 21 points as the Wolfpack won 83-53.

The No. 2 NC State women’s basketball team knocked down 16 3-pointers, tying the program record, en route to an 83-53 blowout win over the Pitt Panthers in the team’s home finale. The Pack finished the season with a perfect home record.

“Really good day, nice team win,” said head coach Wes Moore. “I thought [Jones and Crutchfield] both played extremely well… We shot the ball 16 out of 26 from 3, which is pretty amazing…We were clicking and hitting shots, so it was a good win.”

With the score tied 5-5 early into the first quarter, the Pack turned on the heat, knocking down five straight 3s to take a 20-5 lead. Perez knocked down two shots from outside while Jones, Brown-Turner and Crutchfield each had one. The Pack was up 22-10 at the end of the first quarter.

It was more of the same in the second as three of the Pack’s first four buckets in the quarter came from outside. Cunane then came alive in the final minutes of the half, scoring the team’s last eight points, including a 3, to put the Pack up 41-26 at the midway mark.

After Jones kept the heat on with a 3 to begin the second half, NC State went on a 20-point run in the third quarter and had more than doubled the Panthers going into the final quarter up 71-34. During the big run, the Pack got 3s from Perez, Brown-Turner and Jones.

The Pack was on mop-up duty for the final 10 minutes but was still able to knock down a couple of 3s as Crutchfield hit one and freshman guard Rebecca Demeke knocked down one of her own to raise the team’s total to 16 on the day.

Perez and Brown-Turner each had a team-high 14 points, while Perez knocked down a team-high four 3s. Crutchfield and Jones each had three 3s of their own, while sophomore forward Jada Boyd knocked down one as well.

“I guess when one person hit it, we just started hitting,” Jones said. “We really hit when we started swinging the ball and making the defense move.”

Due to NCAA rules put in place for this year, both Jones and Crutchfield have the option to return to NC State for one more season. Nonetheless, it was still an emotional day for both.

“I was emotional,” Jones said. “Before I even got to the gym, I was already crying in my room this morning… When I got to the locker room, the girls surprised me and [Crutchfield]...Then I just tried to lock in for the game. I was just happy today.”

Both Jones and Crutchfield have accomplished a lot at NC State. From making it to the Sweet 16 back-to-back years, to winning the ACC Championship last year, to beating two No. 1 ranked teams and finishing with a perfect home record this season, the two have a lot to be proud of and may have more to add to their illustrious careers.

“The four years I’ve been here have been great,” Crutchfield said. “Me and [Jones] have grown together, we’ve learned a lot together, so I don’t take it back for anything.”

The Wolfpack will wrap up its regular season on the road against Syracuse on Sunday, Feb. 28. The game is set to start at 12 p.m. and will be broadcast on the ACC Network.

OPINION: Believing in astrology shouldn’t hold such a negative connotation