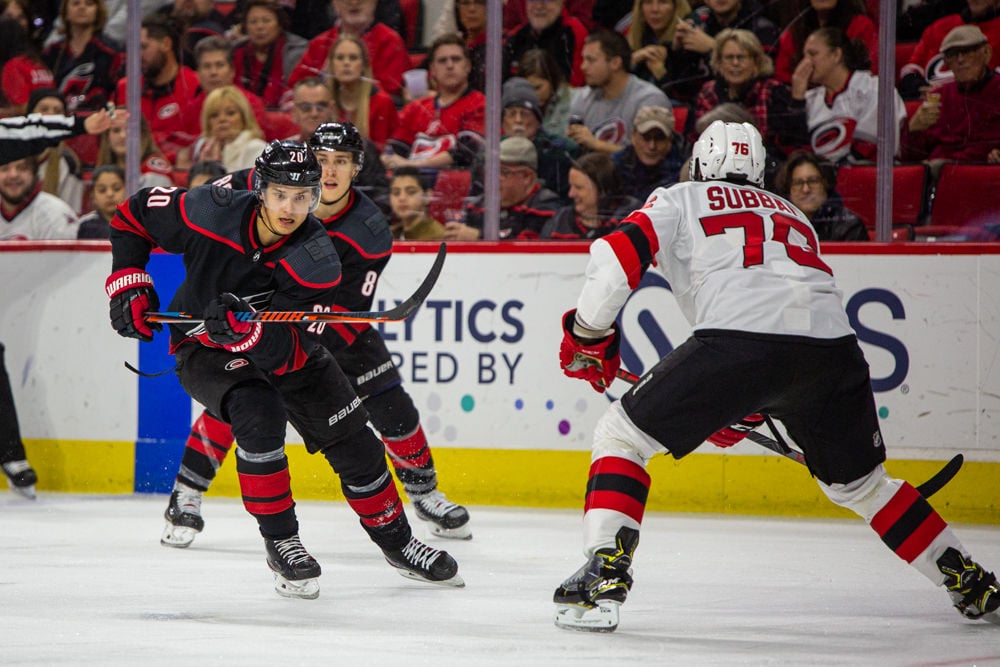 Hurricanes center Sebastian Aho chases the puck versus Devils defenseman P.K. Subban on Friday, Feb. 14, 2020 at PNC Arena. Aho had one assist in the 5-2 win over the New Jersey Devils. 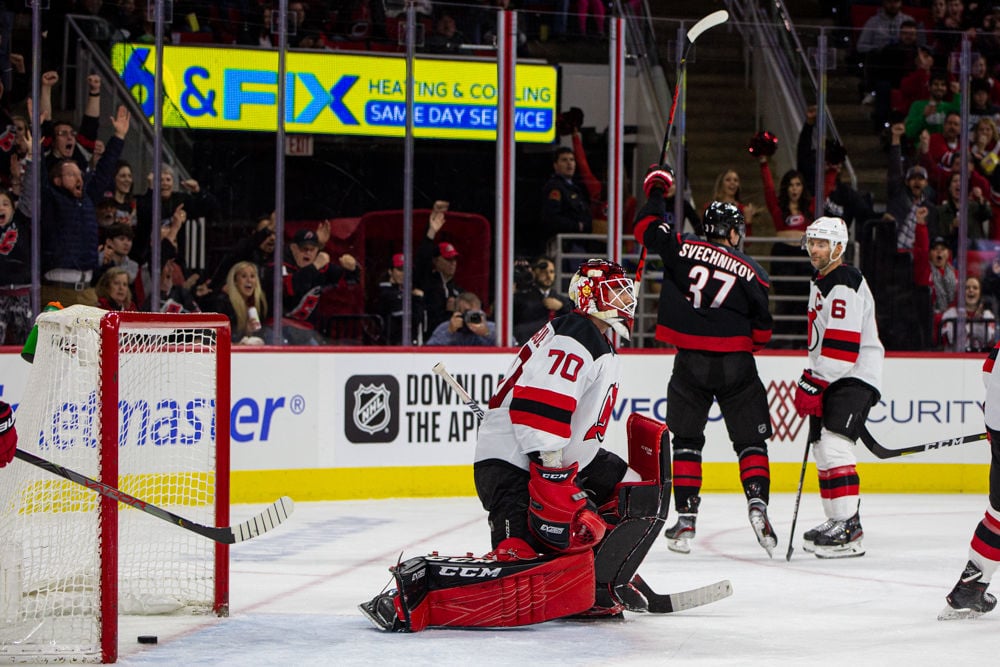 Hurricanes right wing Andrei Svechnikov celebrates his goal in the second period versus the Devils on Friday, Feb. 14, 2020 at PNC Arena. Svechnikov had one goal on four shots in the 5-2 win over the New Jersey Devils.

Hurricanes center Sebastian Aho chases the puck versus Devils defenseman P.K. Subban on Friday, Feb. 14, 2020 at PNC Arena. Aho had one assist in the 5-2 win over the New Jersey Devils.

Hurricanes right wing Andrei Svechnikov celebrates his goal in the second period versus the Devils on Friday, Feb. 14, 2020 at PNC Arena. Svechnikov had one goal on four shots in the 5-2 win over the New Jersey Devils.

PNC Arena did not find inter-divisional love as Carolina ruined its date with the Devils, stomping out their hearts 5-2 Friday night.

However, the love that was in the air was the strong support of the ninth sellout crowd at PNC Arena this season as the Hurricanes battled it out against New Jersey.

Oh, yeah. And some love for a few ridiculous plays by some of the Hurricanes’ best.

Not only that, but also a double birthday.

Both goaltender Petr Mrazek and the voice of the Carolina Hurricanes, play-by-play voice John Forslund.

With so many festivities occurring in the building, the Hurricanes did not let the crowd down.

“Our building has been great this year,” Mrazek said. “The fans are awesome. Four-game stretch on the road is not what you want, but we are home for today and Sunday, so you have to take advantage of it.”

Nino Neiderreiter got the game going, ripping a bomb from the blueline only 3:43 into the game. Niederreiter’s goal was his second in 11 games and it snapped the team’s six-game streak of surrendering the first goal in a game.

“The biggest thing for us tonight was playing simple hockey,” Niederreiter said. “That’s what we did early on. We got pucks deep when we had to and we made plays when they were there and put pucks to the net.”

A bit later, a breakdown by the Canes saw them cough up the lead as Mirco Mueller tapped home an easy goal after an entire forward line failed to backcheck.

On the precipice of that frustration, Warren Foegele got his team back in front as he collected a hard pass from the point, controlled it and turned and fired, beating New Jersey netminder Louis Domingue.

Carolina took control of the game from there and it was easily due to the complete dominance that the Hurricanes’ top-line of Sebastian Aho, Teuvo Teravainen and Andrei Svechnikov exhibited on the ice.

According to Natural Stat Trick, an advanced analytics site, the line had a Corsi-for percentage of 89.47% with 17 chances for and only 2 chances against. In layman terms, the line virtually allowed almost no shots against and just simply poured on the offensive pressure every time they were on the ice.

The dominance placed itself on a perfect platter as a tape to tape, Tic-Tac-Toe sequence of passing led to Carolina gaining a 3-1 lead.

Entering the zone, Svechnikov dropped it off to Aho, who laced it cross-ice to Teravainen, who one-touched it to Svechnikov who had placed himself right in front of the net for an easy tap-in. The whole play lasted about three seconds off the rush before the line scored.

Even when the Hurricanes weren’t putting the puck in themselves, New Jersey was finding little ways to make their dates nights even better.

For one, Martin Necas redirected a point shot right into Domingue and as the puck lay loose near the crease off the initial save, a Devils defenseman took it upon himself to knock the puck across the goalline.

Other times, even when New Jersey was on the power play, the Devils were still allowing a few Hurricanes’ players to attempt to further the lead with shorthanded breakaways. Jordan Staal and Aho each got a chance, but it was eventually Joel Edmundson hit by a stretch-feed from Niederreiter as soon as he stepped out of the box who converted.

The Devils picked up a second goal a few seconds later off of another breakdown in coverage, but it would be the last for either team, but not from lack of trying. Mrazek and Edmundson came together late in the game to stone the Devils with a sequence of ridiculous saves.

“In the last period, Petr made some ginormous saves for us,” Niederreiter said. “We got to make sure he doesn’t need to do that every night for us.”

With the win tonight, Carolina moves within two points of the second wild-card position. The team is still battling just to make the playoffs again, but it is proving it is capable and willing to do what it takes to return.

“It was a better game for us,” said head coach Rod Brind’Amour. “Not great, but I thought we came up big at the right times. The penalty kill was big, especially at the end. The score wasn’t in doubt necessarily, but when the game was tight… a big goal kind of got us moving in the right direction.”

The Canes are back in action Sunday as the team plays host to the Edmonton Oilers, 4 p.m. at PNC Arena.