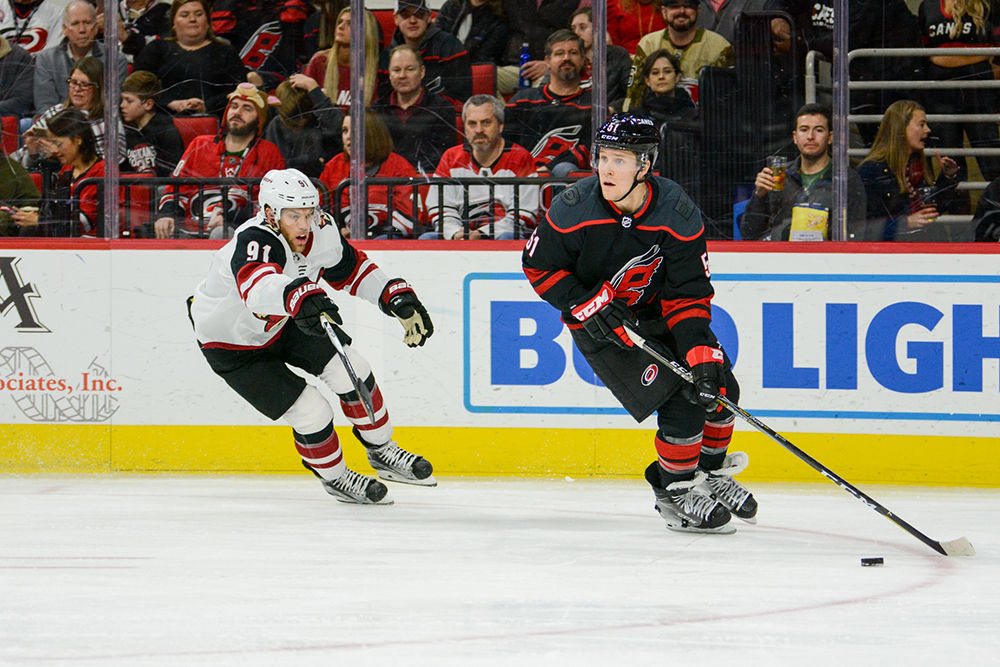 Carolina Hurricanes defenseman Jake Gardiner looks to pass the puck during the game versus the Arizona Coyotes on Friday, Jan. 10, 2020 in PNC Arena. The Hurricanes beat the Coyotes 3-0. 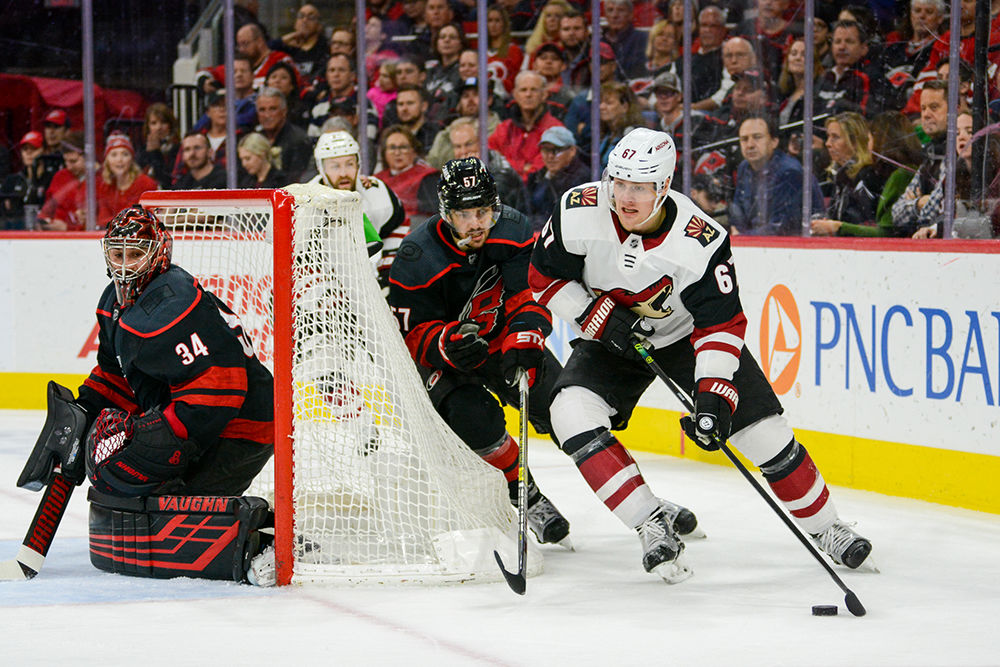 Carolina Hurricanes defenseman Jake Gardiner looks to pass the puck during the game versus the Arizona Coyotes on Friday, Jan. 10, 2020 in PNC Arena. The Hurricanes beat the Coyotes 3-0.

It was like an exhibit at an art museum.

Four different areas of the game, magnificently put on display for an adoring crowd 16,476 strong.

First, it was the beautiful lacing of Andrei Svechnikov who showcased his vision and his ever-developing passing skills as he fed a perfect seam pass to Warren Foegele in the slot.

Then it was Lucas Wallmark putting his hand-eye on display with an ever so subtle tip on a Dougie Hamilton shot.

The most spectacular was Martin Necas’ elite edge work that put the entire building in a state of shock.

And finally, it was the 32-save shutout that Petr Mrazek meticulously and patiently crafted much to the love of the patrons.

That was the beauty showcased during the Carolina Hurricanes’ total team effort, 3-0 shutout win over the Arizona Coyotes Friday night at PNC Arena.

“We’re a young group and they are a huge part of what we’re doing,” said head coach Rod Brind’Amour on the offensive playmakers. “We need everyone to contribute, but it’s nice when they’re scoring. It takes a lot of pressure off of our other guys as well.”

Early on, Carolina was buzzing. The past three games had seen the Hurricanes dig themselves into a hole due to poor starts, but it seemed today that the team was ready off the opening draw.

“We came out really hard in the first period there,” said Foegele. “We talked about it going into today that we needed to come out harder.”

Brett Pesce rang iron halfway through the first and soon after Nino Niederreiter was called for an offensive zone infraction, and it seemed that Carolina was going to be stung by Lady Luck.

However, hard work outplayed any need for luck as the Canes killed off the first penalty and quickly turned the tides.

On a great effort by Jake Gardiner to keep the zone, the defenseman managed to beat the puck to the blueline and bat it back into the far corner. Svechnikov raced down the ice, beating out the Arizona defender, and turned on him, seeing Foegele joining the play.

Svechnikov laid the perfect pass to him in the slot and Feogele buried it giving Carolina the first goal of the game.

“Like I said, we came out really hard in the first and that was a good push for us,” Foegele said. “The second we were a little bit sloppy, but we know what we need to do. When we are playing down low we can beat anyone.”

The second period leaned more in the Coyotes’ favor at the onset as Arizona’s speed and passing gave the Hurricanes trouble, but Mrazek stayed steady, stabilizing the Hurricanes long enough to tilt the tables in their own favor.

With only a minute and change left in the period, the Hurricanes struck again.

Wallmark won an offensive-zone faceoff back to Jaccob Slavin who shot wide, ringing it around the boards. Hamilton collected it near the top of the circle and let go of an innocent-looking shot, but Wallmark was there with the tip sending it off of Coyotes’ netminder Antti Raanta’s glove, into his mask, off the bar and into the net.

With time running down in the second, Necas decided to put on a show.

In a spectacular display of skating that hasn’t quite been seen in Raleigh since Jeff Skinner, Necas received a pass near the high slot, backpedaled down from the top of the left circle past a defender, reversed his footwork while maintaining the same speed to burst around from behind the goal and elevate a backhand shot past Raanta’s pad and in.

It was an utterly insane play by the 20-year-old former first-round pick to make and is a sign of what he will be capable of when he finishes developing.

“As the season goes longer, especially for rookies, you get more experiences, more confidence and you can make more plays,” Necas said on his growth.

The Canes held on through the third period to secure a fourth win on the seven-game homestand and Mrazek’s third shutout of the season.

“I saw the puck really well,” Mrazek said. “I felt good. The guys helped me when I couldn’t see the puck as well so it was way easier.”

Carolina will take the ice less than 24 hours later as it plays the second half of the back-to-back against the LA Kings Saturday as the team looks back on its past, sporting the historic Hartford Whalers uniforms.

With their goals, Foegele, Wallmark and Necas all registered 10 goals on the season and asked post-game if they got anything for being part of the 10-goal club, Foegle responded with a laugh.