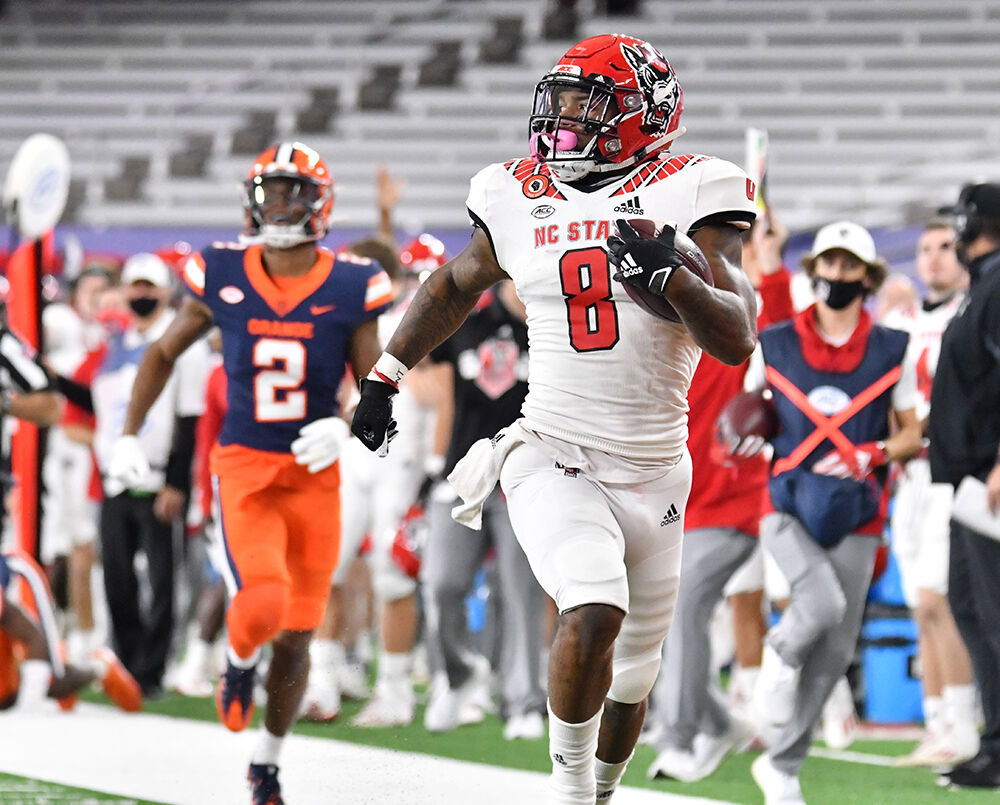 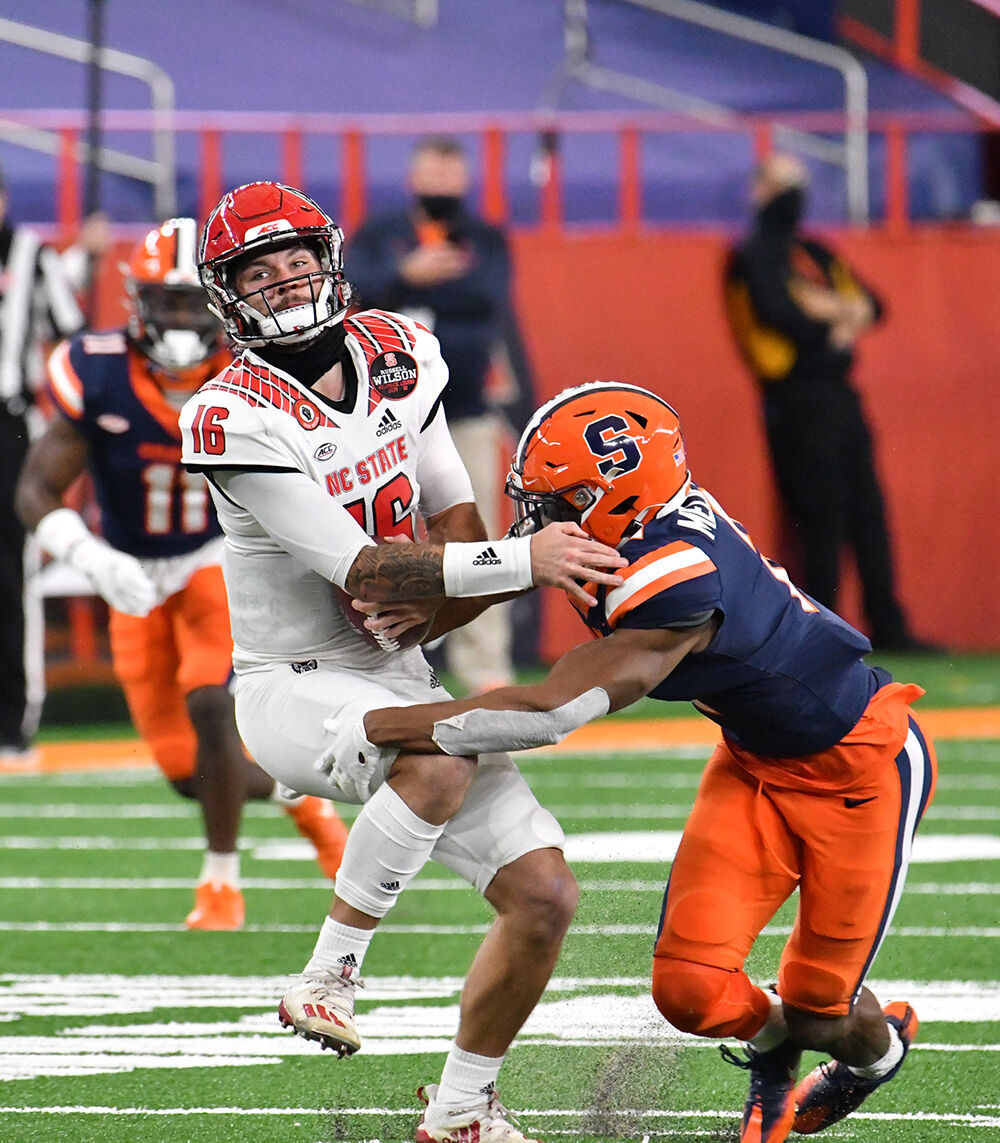 NC State football topped Syracuse 36-29 Saturday afternoon in New York in a battle that took all four quarters to crown a winner.

With only one win on the season, Syracuse was expected to be one of the Wolfpack’s easiest games on the schedule, but emotions ran high on Syracuse’s senior day, and the team from upstate New York not only made it a tough game for NC State, but held the lead for most of the second half.

While Syracuse played well for most of the game, it showed why it only had one win on the season on its last drive, spiking the ball on fourth-and-goal with one second left to hand NC State the victory. Redshirt junior quarterback Bailey Hockman had one of his better games, completing 23 of 31 passes for 313 yards and four touchdowns, including finding redshirt junior receiver Thayer Thomas nine times for 102 yards and three scores.

After the Pack defense stopped Syracuse just past midfield on the opening drive, a long touchdown pass to junior running back Ricky Person Jr. was wiped out with Person barely stepping out of bounds. Then, freshman receiver Porter Rooks lost yardage on a reverse gone wrong, but a late hit on Hockman on third down extended the drive. After an offsides penalty on Syracuse gave NC State another first down, sophomore back Zonovan Knight finally cashed in to give the Wolfpack a 7-0 lead.

Fans of the Wolfpack offense didn’t have to wait long to see them back on the field. On the ensuing kickoff, Syracuse’s Trebor Pena took it to the house and tied the game at 7. However, that meant the Syracuse defense that had been grinded down for a nine-play touchdown drive would be back on the field with no rest.

Hockman seemed to run it in for a score and restore the touchdown lead, but replay review determined he fumbled the ball through the end zone, resulting in a touchback and keeping the game tied. While Syracuse didn’t get a touchdown on the ensuing possession, a field goal gave the Orange a 10-7 lead.

“It looked to me that [Hockman] reached across the goal line and then lost the football,” said NC State head coach Dave Doeren. “I’m not sure how they overturned that; that was a bad decision on their part.”

Things didn’t get any better for the Wolfpack after the field goal, as graduate receiver C.J. Riley was hit hard after catching a Hockman pass, popping the ball up for Mikel Jones to intercept and run it all the way inside the Pack 5-yard line. Again, NC State held Syracuse to a field goal.

NC State and the Orange traded punts, but the Pack finally took a 14-13 lead as Hockman found Thomas in the end zone, a couple of plays after a holding call extending the drive.

“[Syracuse] played a lot of man coverage and Cover 2, and it allowed me to find those windows,” Thomas said. “I just have to make those plays. All week, we made those plays in practice, and it gave us the confidence to go out there and do it in a game.”

The Syracuse offense struggled to get yards for most of the next drive, chipping away at the Pack defense and facing two third downs. Then, quarterback Rex Culpepper took a shot downfield and connected with Nykeim Johnson for a 60-yard touchdown, giving the Orange a 20-14 lead.

Hockman and the NC State offense failed to keep pace at the end of the first half. Syracuse dialed up another blitz, successfully grabbing Hockman and coming dangerously close to getting another sack in the end zone. Instead, Hockman threw the ball out the back of the end zone, resulting in a safety and a 22-14 Orange lead.

NC State got the ball back with two minutes to go in the first half, but Hockman continued to get pressured and a third-down sack ended the Pack’s hopes of getting a late score. Hockman was sacked six times by the end of the game.

“Coach Doeren keeps it simple,” said redshirt sophomore linebacker Payton Wilson. “He told us we were beating ourselves, and nobody can win a game if they beat themselves. We need to play how we play. We came out flat, and we need to pick it up and win this ballgame.”

The special teams unit hit the ground running to start the second half; Thomas gave the offense a short field to work with, scampering his way to the Pack’s 44-yard line. After giving the Orange a healthy dose of Person, a downfield strike to Thomas for 31 yards cut the Syracuse lead to two points, even after a failed two-point conversion attempt.

After trading punts again, a long punt return by Nykeim Johnson set up the Orange with great field position, leading to a touchdown pass from Culpepper to Taj Harris and a 29-20 Syracuse lead.

As soon as Syracuse looked to be in possession of the game, Hockman and the offense moved the ball down the field, cutting the Syracuse lead to 29-27 with Thomas’ third touchdown catch of the day.

“Thayer’s a weapon,” Doeren said. “He got matched up one-on-one today a lot, and we took advantage of that. Some games are different than others, but we’ll take what we can get.”

The NC State defense forced another three-and-out from the Syracuse offense, and put the offense back to work. A long pass to Thomas on third down kept the drive alive, and senior wide receiver Emeka Emezie finally made an appearance in the game, making a contested catch over top Syracuse corner Ifeatu Melifonwu for a touchdown and a 33-29 Wolfpack lead.

Three three-and-outs later, Hockman dialed up a pass to redshirt sophomore wide receiver Devin Carter and connected for a key conversion and 32 yards. The Pack couldn’t punch it in to go up two scores, but the pass to Carter was enough to give junior kicker Christopher Dunn a chance at a short field goal. Dunn knocked it through the uprights to give NC State the 36-29 lead. The field goal capped off a stretch of 16 unanswered points for the Wolfpack.

“[Hockman] showed his leadership,” Thomas said. “He had a tough play in the first half where he reached the ball across [the goal line], which he probably wants back, but from there, he showed his poise and led us on that run.”

While the Wolfpack managed to salvage a field goal amidst offensive struggles, Syracuse moved the ball in a more convincing fashion. The Culpepper-Harris connection, which proved difficult to cover all day for the Wolfpack, came through again for a key third-down conversion, where Harris kept the tips of his toes in toward the sideline. Then, Harris came through in the clutch once again, turning a short drag route into a first-and-goal. What followed next was one of the more peculiar decisions made in college football this season.

After getting sacked on third-and-goal, Culpepper and the offense rushed to get a play off before the game clock expired. In a lapse of judgement, Culpepper spiked the ball on fourth down to stop the clock, giving NC State the ball and the win.

“I was like ‘[Culpepper] really just spiked it on fourth-and-goal,’” Wilson said. “It was like ‘Whoa’, and it was shocking to me. But hey, it won us the game, so I’m happy with it.”

NC State will come back home to Carter-Finley Stadium to play its final game of the regular season against Georgia Tech on Saturday, Dec. 5. With seven wins and an opportunity to get to eight, NC State is bound to play in a bowl game to put an official end to the season later this year.

“We just want to prove ourselves,” Hockman said. “After last year’s ups and downs, I think we deserve it. I’m so proud of our team and the way we play. Coach has always mentioned if we win the next two games, we’ll get into a good bowl game, and it’ll be huge for the program. I’ll be excited to be a part of it.”