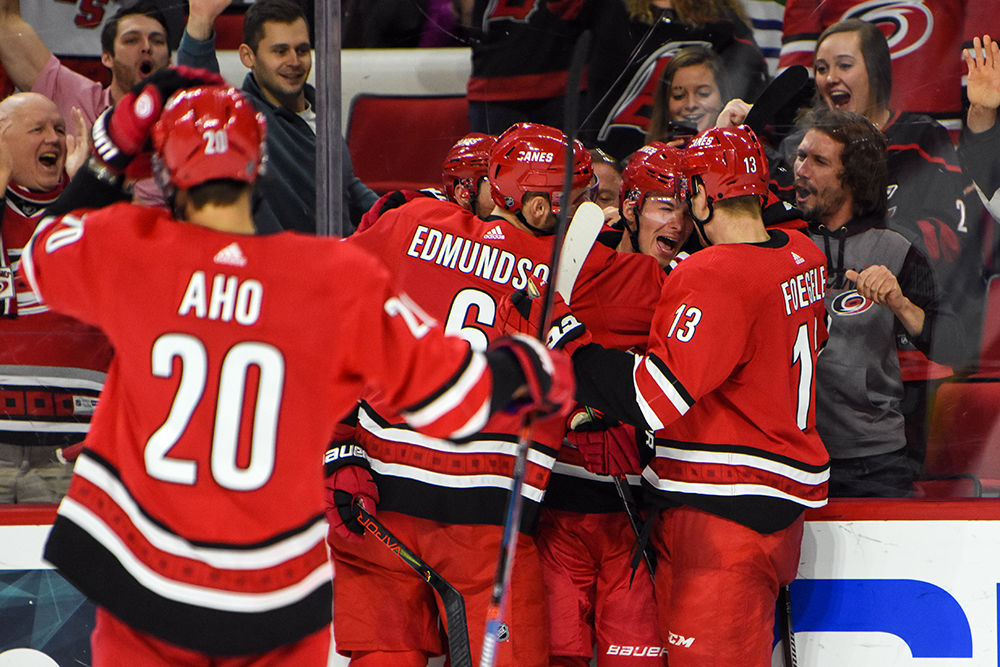 Carolina Hurricanes players celebrate Andrei Svechnikov's third period goal against the Vancouver Canucks on Sunday, Feb. 2, 2020 in PNC Arena. The Hurricanes beat the Canucks in a shootout to win the game 4-3. 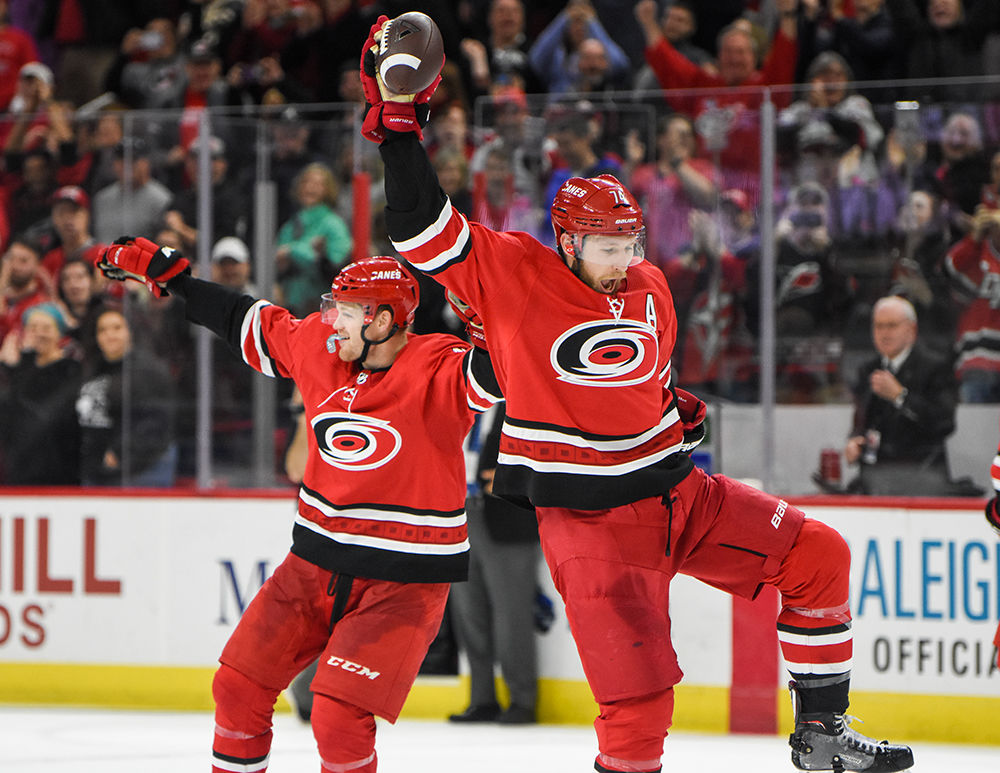 Carolina Hurricanes defenseman Jaccob Slavin celebrates after catching a pass from left wing Erik Haula during the post-game Storm Surge on Sunday, Feb. 2, 2020 in PNC Arena. The Hurricanes won the shootout to beat the Vancouver Canucks 4-3.

Carolina Hurricanes players celebrate Andrei Svechnikov's third period goal against the Vancouver Canucks on Sunday, Feb. 2, 2020 in PNC Arena. The Hurricanes beat the Canucks in a shootout to win the game 4-3.

Carolina Hurricanes defenseman Jaccob Slavin celebrates after catching a pass from left wing Erik Haula during the post-game Storm Surge on Sunday, Feb. 2, 2020 in PNC Arena. The Hurricanes won the shootout to beat the Vancouver Canucks 4-3.

In a game arguably at least a little bit as important as the main one tonight, the Carolina Hurricanes picked up a crucial two points as they defeated the Vancouver Canucks 4-3 in the shootout Sunday afternoon at PNC Arena.

Carolina had been stunned in the last meeting between the two teams by a super hot goaltender and an awfully situated stick, and still, the bad luck continued for the Canes. It wasn’t helped along by the referees who seemed to have a vendetta against the Hurricanes, giving them only a single call over the entirety of the game and not blowing the whistle when two Hurricanes players went down with injuries.

“It’s a tough sport to ref,” said head coach Rod Brind’Amour. “I’ve been saying it forever. Really, I think we go back to one. They’re in the way. We need to get the feel back because penalties can be called every shift and I think sometimes you got to let the game play. There are things I think we can improve and just getting guys off the ice because the game’s too fast.”

Early on, the Canucks, and more particularly Elias Pettersson, became the recipient of another fortunate bounce as the Vancouver All-Star found a loose puck near the bottom of the circle and spun and roofed it when it had eluded most everyone else on the ice.

The point shot from a Canuck defenseman had struck a body out in front and neither the Hurricanes defense nor James Reimer had any idea where it had ended up. The only one who knew was Pettersson who found the puck and without time to think, quickly put it on net.

The first period ended with the Hurricanes down 1-0 and while it was a much better start than they had seen last game, it still left a lot to be desired.

The second, however, showed a different side completely as the team generated a hyper-aggressive forecheck right off the bat and got down to work grinding away the Canucks.

The pressure paid off and the recipient of some much-needed puck luck came up big as Nino Niederreiter took a feed in the slot and took a shot off his backhand with a spin-o-rama that caught Vancouver netminder Thatcher Demko by surprise.

“Getting pucks in, forechecking, it’s just go, go, go,” said forward Warren Foegele. “For us to be successful we have to be tenacious and tonight, especially in the second and the third, we were really hemming them in their zone and making life difficult for them.”

The pressure kept mounting and this time it was Sebastian Aho’s shot that found the back of the net as the Canes’ leading goal-scorer potted his obligatory goal for his 26th of the season.

However, the Canes fell victim to misfortune again when attempting to clear the zone as another stick breaking left them again in a dire situation. This time it was Jaccob Slavin’s, one of the Hurricanes best defenders. Essentially down a man for the ensuing Vancouver forecheck, the Canucks struck fast on the opportunity and it was Tyler Myers who managed to clean up a loose puck out front.

Late in the second period, one of the Canes’ most important players Brett Pesce took a slapshot right to the glove and he went down hard and left the ice bleeding all over the place. The whole building held their breath, but eventually he did return and was effective.

“When I saw his hand, I’m like ‘Oh, I don’t want to see that,’ because it was bleeding so much,” said Andrei Svechnikov. “The boys kind of got fired up after that and I feel that we played harder after that moment. I see him come back and I’m thinking, ‘He’s a real warrior.’”

The Canes struck again in the third and this time it was Svechnikov with the complete individual effort. Starting from the neutral zone, Svechnikov burst into the Canucks zone and executed a power move around fellow 2018 top-10 draftee Quinn Hughes, and with barely any room, roofed it over the shoulder of Demko.

The Canes didn’t have long to dwell on the Svechnikov’s monster play though as Vancouver quickly found the equalizer thanks to an impossible angle snipe from Pettersson.

The game came down to the wire and not even overtime could determine a winner so the game went to the shootout.

With the first round seeing Svechnikov stopped and Pettersson scoring, the Canes were already in a tight spot. However timely shots by Teuvo Teravainen and Justin Williams followed by two huge saves by Reimer sealed the Hurricanes’ win.

“You want a chance to win the game and Horvat came in and he’s a highly skilled player and you just try and wait him out and not give him too much net and I was lucky enough to get a glove on it,” Reimer said on his final shootout save.

Carolina will now set off for a 12-day, four-game road trip before returning to PNC Arena Feb. 14 to take on the New Jersey Devils.