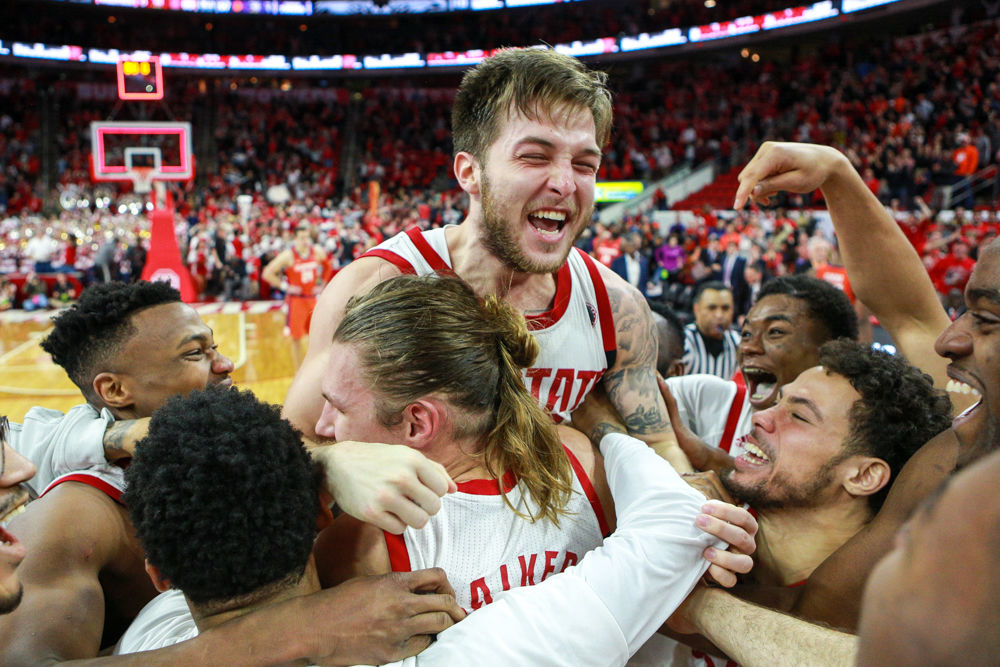 The team lifts sophomore guard Braxton Beverly into the air after Beverly's buzzer-beating 3-pointer to beat Clemson 69-67 on Saturday, Jan. 26 in PNC Arena. Beverly had 12 points and a team-high five assists in the tightly fought battle. 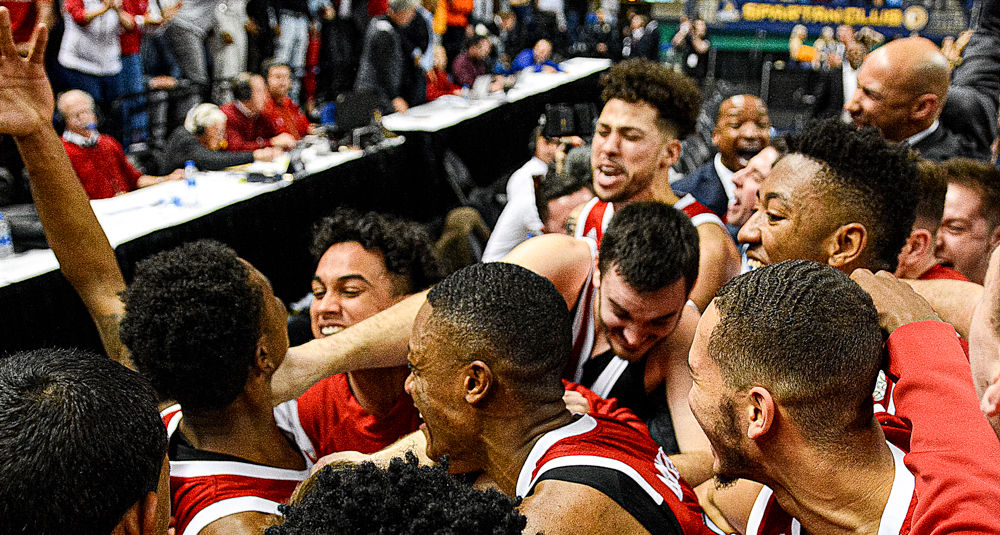 The team lifts sophomore guard Braxton Beverly into the air after Beverly's buzzer-beating 3-pointer to beat Clemson 69-67 on Saturday, Jan. 26 in PNC Arena. Beverly had 12 points and a team-high five assists in the tightly fought battle.

It’s the final day of 2019, and Technician sports finishes out the top 19 NC State sports moments of the year with 1-7 on New Year’s Eve. The finale includes huge postseason finishes from NC State wrestling, swimming and diving, and women’s cross country, long winning streaks from Pack baseball and women’s basketball, and a pair of men’s basketball buzzer-beaters.

Although it’s the lone wrestling moment on the list, it’s a big one, as the Pack won its second ACC Championship in the last four years. Nine of NC State’s 10 wrestlers finished in the top three of their respective weight classes, and three of them, Jamel Morris, Hayden Hidlay and Malik McDonald, won individual conference titles.

The Wolfpack also had three second-place finishes and three third-place finishes. The Pack beat out Virginia Tech, the host team, 93.5 to 86, and the nine wrestlers who finished on the podium received bids to the NCAA Championships, where NC State finished 17th.

6. Both swimming and diving teams finish inside top 10 at NCAAs

In March, both the NC State men’s and women’s swimming and diving teams finished in the top 10 at the NCAA Championships, with the women finishing seventh and the men finishing fourth.

Led by then-freshman Sophie Hansson’s podium finish in the 200-yard breaststroke, the women tied their highest-ever finish at the NCAAs with the 2017 team. The Pack finished just half a point behind the sixth-place team with eight All-American honors.

A gold-medal performance from then-senior Andreas Vazaios propelled the men’s team to its fourth fourth-place finish in a row. While Vazaios’s medal was impressive, he was not alone in bringing the Wolfpack its top-five finish, as the Wolfpack ended with 22 total All-American honors.

NC State baseball had a number of wild finishes and comebacks during its 19-game streak, but none were more memorable than coming back from four- and three-run deficits to beat the Seminoles. Then-freshman center fielder Tyler McDonough walked it off with a single up the middle with two outs in the ninth inning.

Florida State started hot, scoring four runs in the first two innings to take an early lead. However, anyone that watched NC State in its previous games knew the team would come back, and it did. The Pack had the game tied up in the second inning and took the lead in the third inning. What NC State fans didn’t expect were runs scored in the fourth, fifth and eighth innings to put the Pack in a three-run hole.

It was then-junior Brad Debo’s three-run home run in the eighth that tied it before McDonough knocked in then-sophomore Devonte Brown to win the game in the ninth. NC State won the series against then-No. 1 Florida State with a 16-0 beatdown in game one, but the Seminoles ended NC State’s streak in the series finale the next day.

The success senior Elly Henes and the women’s cross country team had in 2019 is no surprise, but some NC State fans still don’t realize the Pack cross country program is one of the best in the country.

More impressively, Henes finished first at the ACC Championship and the NCAA Southeast Regional, while crossing the line in 10th at the NCAA Championship, a personal best. Henes has locked down this lineup for women’s cross country and will certainly be missed, but there is a lot of young talent for the future under head coach Laurie Henes, Elly Henes’ mother.

With an 85-69 win over Boston College on Jan. 6 behind a career-high 31 points from then-graduate guard Kiara Leslie, the NC State women’s basketball team won its 15th straight game to begin the season, setting the program record for best undefeated start to a season. The Wolfpack went on to win six more games in its record-setting start to the season, reaching a 21-0 record before finally suffering its first loss 89 days into the season.

NC State didn’t just get lucky in a few games to keep the streak alive, either; it dominated through and through. During the 21-game winning streak, the Wolfpack won only two games by fewer than eight points, a four-point win over Michigan State in the Cancun Challenge and a three-point home win over Clemson. Despite losing three starters to season-ending injuries throughout the season, the Wolfpack persevered through the adversity for the best start to a season in NC State women’s basketball history.

There are few things more exciting in sports than a game-winning half-court heave at the buzzer, and senior guard Markell Johnson’s against UNC-Greensboro didn’t disappoint. UNCG has built a very respectable program over the last few seasons, and going to the Greensboro Coliseum and coming away with a win is no walk in the park.

The video below shows that his teammates had confidence in Johnson nailing the shot. Redshirt junior forward D.J. Funderburk threw his arms up in celebration while the shot was still in the air, and freshman guard Chase Graham took off from the bench to celebrate with his teammates before it went in.

In March, the Wolfpack was told that it didn’t have enough quality wins to get into the NCAA Tournament, and while the win at UNCG wasn’t a quadrant-one win, it’s still a solid road victory for the Pack.

With just a two-day turnaround after suffering a close road loss to Louisville, the men’s basketball team found itself in a can’t-lose situation at home against Clemson on Jan. 26. Needing a win to keep up with the ACC heavyweights and to pick up a good win for the NCAA Tournament Selection Committee, the Wolfpack couldn’t afford a letdown against a possible tournament team in Clemson.

Enter Braxton Beverly. After back-to-back missed free throws by the Tigers, who were clinging to a one-point lead after leading by as many as six points with under 30 seconds to play, the then-sophomore guard caught a trailing pass and pulled up from deep behind the 3-point line for a buzzer-beating, potentially season-saving, game-winning 3-pointer. Beverly’s 3-pointer electrified the rowdy PNC Arena crowd and cemented his place in every men’s basketball hype video for years to come.

Over the last three days of the year, Technician’s sports editors will be counting down the top 19 NC State sports moments of 2019. In part one, we have some Pack pros on the move, a stunning week for one of softball’s best and more.