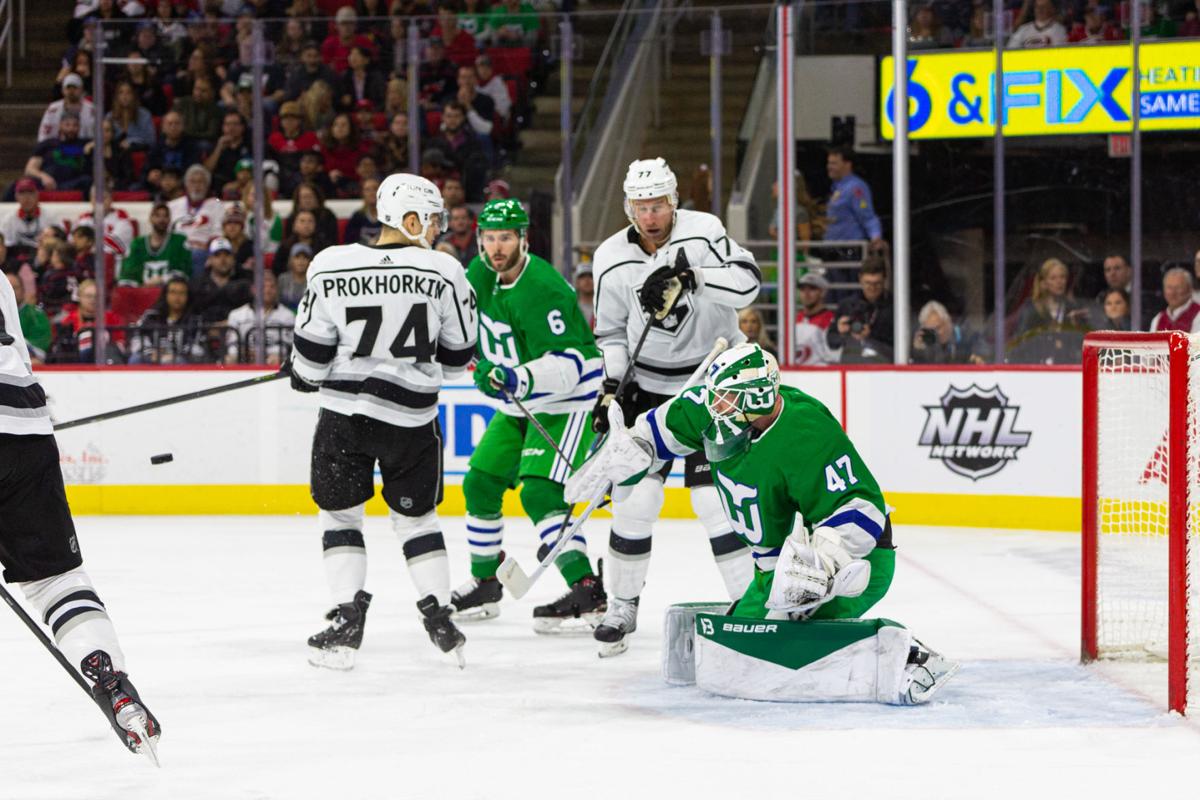 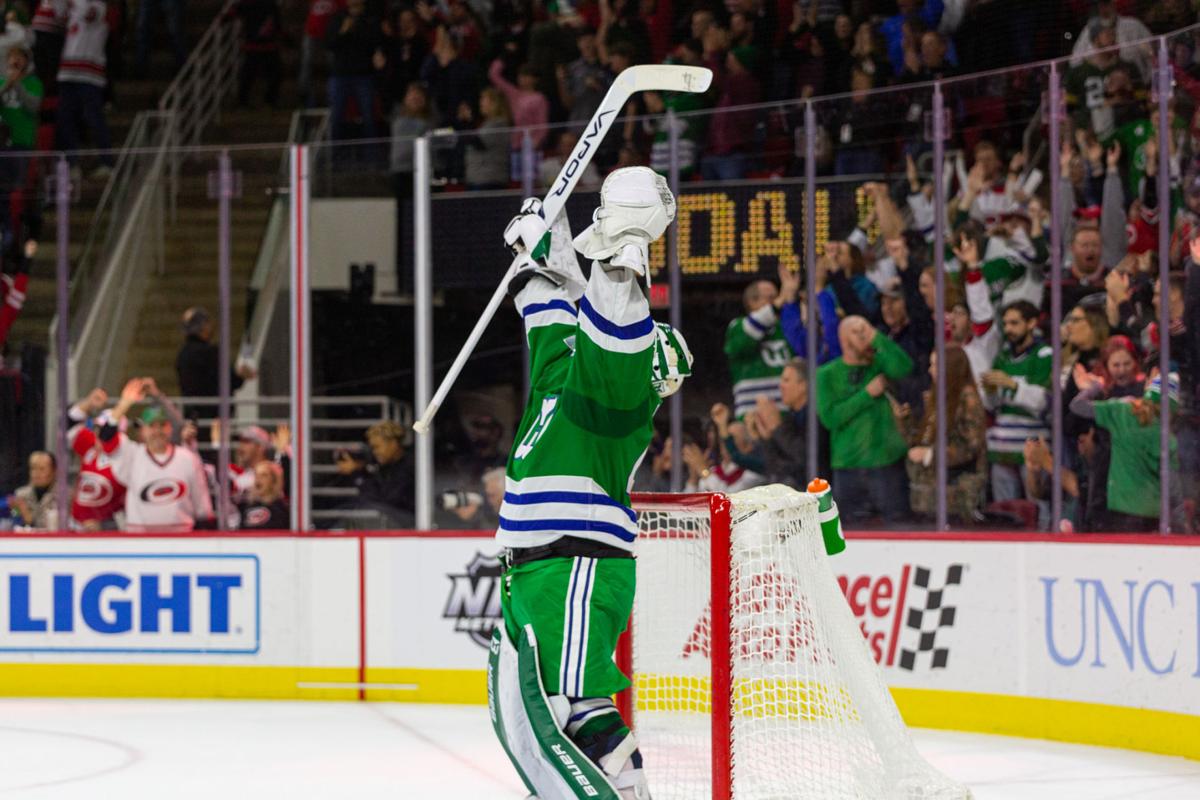 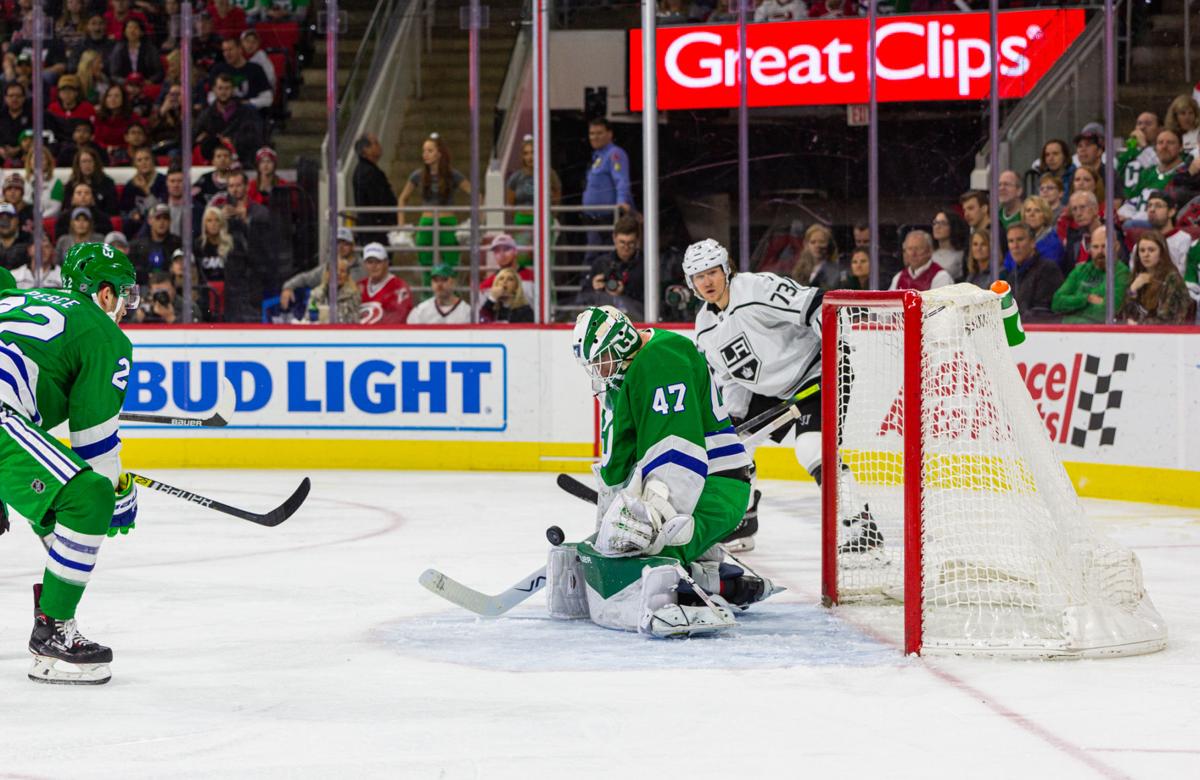 It was a battle to the end and a war of inches as the Carolina Hurricanes, moonlighting as the Hartford Whalers for the night, outlasted the LA Kings’ siege to secure the 2-0 shutout victory.

While the Hurricanes did score the only two goals of the game, the first coming less than five minutes in and the last with only four seconds remaining, it left essentially 45 minutes of scoreless back-and-forth hockey.

That vacuum was filled with amazing pad saves from James Reimer, the Kings mucking up the passing and shooting lanes, and the Canes coming together to put together 16 total blocked shots in aid to their embattled netminder.

It was the Hurricanes’ first time registering back-to-back shutouts since 2003 and Reimer’s third shutout of the season and first at home. It is also the first time in franchise history that the team has had two goaltenders each with three registered shutouts.

“Honestly, my other starts here haven't been the greatest,” Reimer said. “It was nice to have a good performance here at home and have some fun with the fans. They are what makes the game exciting and they're a loud bunch and they give us a big boost. It was fun to have that in front of them."

Fans didn't have to wait long for "Brass Bonanza," the widely-loved goal song of the original Hartford Whalers, as the Canes struck first and quickly, and the famous 1970's instrumental triumphantly aired over PNC Arena’s speakers.

Despite struggling all season to find the back of the net, Nino Niederreiter got lucky enough for a second chance as the snakebitten forward scored his sixth goal of the season.

The goal was all spearheaded by Sebastian Aho’s speed as he raced to neutralize an icing off a misplayed Dougie Hamilton stretch pass. He beat out the LA skaters and one-touched it behind him right onto the tape of Teuvo Tervainen open in the slot who then ripped it over to Nino Niederreiter open on the wing.

As Kings’ netminder Jack Campbell went down early as Teravaianen received the puck, it looked like Niederreiter would have an open net to one-time the puck into, but instead he one-touched it right back to Teravainen.

Teravainen finally decided to be the one to take the shot and the puck went off of Cambell’s crest and right back to Niederreiter still at the side of the net and he made it right, sweeping the puck into the net.

“It definitely helps a lot obviously when you’re struggling to find the net,” Niederreiter said. “You always second guess yourself and do different things and it was nice that the puck came back to me even though I should have shot it first.”

After it seemed like the Canes were controlling the flow of play late into the period, the Kings turned it up and began blasting chance after chance against Reimer who was doing his best impression of a whale filling up the entirety of the net and not letting a single puck past him.

There were a few pivotal moments in the game where Reimer was challenged with in alone chances, Andrian Kempe was one who he saw frequently, but each time he kicked out the pads to deny the LA skaters and bail out his team.

“He was absolutely terrific tonight,” Niederreiter said on Reimer’s performance. “He well deserved that one. He’s been battling quite a bit and went in tonight and he definitely won the game for us tonight.”

Reimer kept pace through the rest of the game even as the Kings chances started to multiply. With time running down and LA running six skaters, Reimer took a shot that knocked him down for quite a while.

“Just a little dehydrated that’s all,” Reimer said after the game referring to cramps he started to suffer from with only 29 seconds remaining in the game. Obviously sick, as he was coughing throughout the post-game interview, it just shows how much Reimer battled through for his team.

It puts a little more emphasis on what Niederreiter said on him battling quite a bit.

Reimer only had to hold on for just a little longer as eventually Teuvo Teravainen managed to break the zone and beat out LA defenseman Drew Doughty who was all over him to seal away the game with the empty netter.

“Well we survived, there’s no doubt, the last almost two periods,” said head coach Rod Brind’Amour. “First period was fine, I thought it was really good. We came out, we had good jump and we looked like we knew what we were doing and then we just took the foot off the gas a little.”

The win caps out the Canes’ season-long seven-game homestand with a 5-2-0 record. It was a good finish after two disappointing losses to some of the NHL’s top teams midway through, but the team showed the resilience to keep fighting.

The Hurricanes will now face a familiar foe in the Washington Capitals as they head to the nation’s capital for a Monday night showdown.

Canes vs Kings on Whalers Night