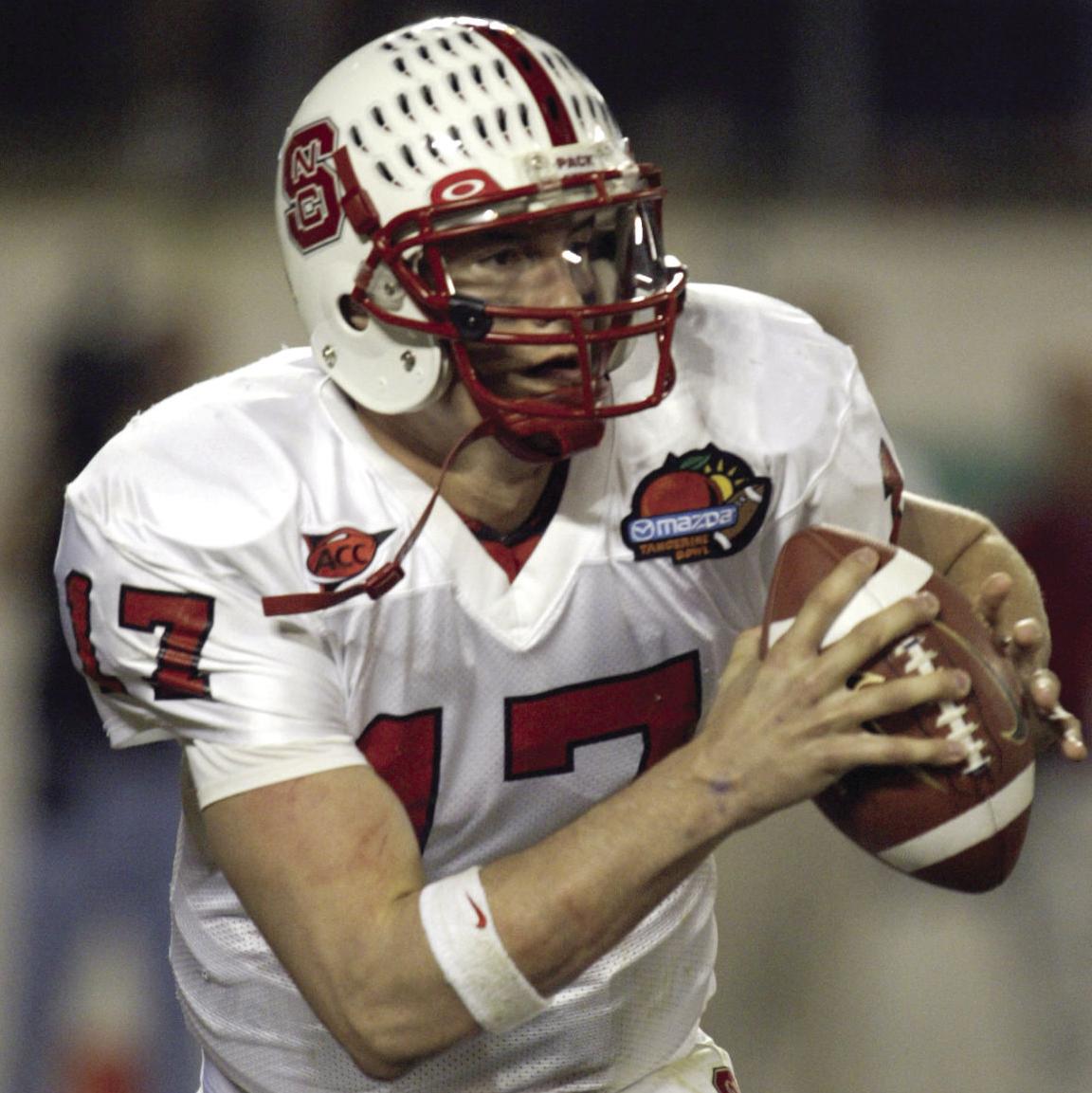 Philip Rivers scrambles and looks for a receiver to pass to during the Tangerine Bowl on Dec. 22, 2003. 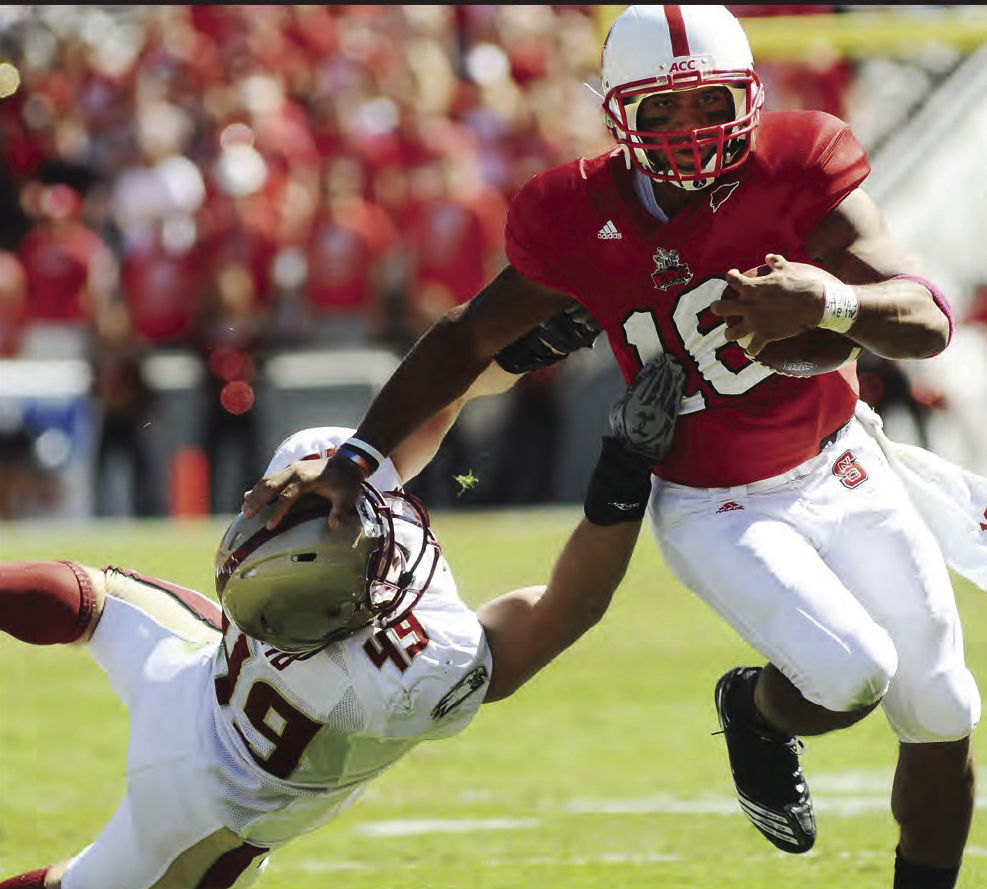 Redshirt junior quarterback Russell Wilson pushes a Boston College defenseman off as he breaks a tackle. Wilson was a key player this season for the Pack, using both his arm and his legs. Wilson accounted for 35 total touchdowns, helping the Pack to an 8-4 season.

Philip Rivers scrambles and looks for a receiver to pass to during the Tangerine Bowl on Dec. 22, 2003.

Redshirt junior quarterback Russell Wilson pushes a Boston College defenseman off as he breaks a tackle. Wilson was a key player this season for the Pack, using both his arm and his legs. Wilson accounted for 35 total touchdowns, helping the Pack to an 8-4 season.

NC State football has gained a reputation for routinely placing the best quarterbacks in the country under center. Roman Gabriel, Eric Kramer, Jamie Barnette and Terry Harvey laid the groundwork for NC State to be referred to as “QBU”, but when Philip Rivers came to Raleigh in 2000, the frequency of great Wolfpack quarterbacks began to increase. Names such as Russell Wilson, Mike Glennon, Jacoby Brissett and Ryan Finley continued the legacy of excellent quarterback play not only in college, but in the NFL. Technician had the privilege of covering all of these Wolfpack greats during their collegiate careers, so let’s turn back the clock and look at what Technician writers had to say about the two most influential quarterbacks to come through NC State.

Philip Rivers arrived bright-eyed and ready to roll when he got to Raleigh in 2000. Even in his first game, fans and coaches knew that he was special. Then-Sports Editor Jeremy Ashton wrote about Rivers in a Technician article from Sept. 5, 2000 and offered nothing but praise after the quarterback led the Pack to a 38-31 win over Arkansas State in his first collegiate start.

“The 18-year-old Rivers led the charge down the field on that drive,” Alston said. “Rivers came into Saturday night with tremendous fanfare and never succumbed to the pressure, throwing for 397 yards in his debut. Obviously, one game doesn’t make a star, but from what I saw, the freshman quarterback is worth the hype.”

As most fans know, Rivers would lead the program to new heights during his career. While in Raleigh, Rivers would go 3-1 against UNC, lead the Pack to a Gator Bowl win against Notre Dame, win 11 games in 2002, and win ACC player of the year in 2003. Rivers still stands to be the all-time ACC leader in passing yards, beating out the quarterbacks behind him by almost 2,000 yards.

Rivers is still arguably the greatest quarterback in NC State and ACC history, and he continued his excellence at the pro level. In the end, Ashton was right: Rivers was worth the hype.

While there are a few years that NC State fans want to forget in between Rivers and Russell Wilson, most fans viewed Wilson as the spiritual successor to Rivers. Wilson had the charisma, the flashiness, and the passion for the game — all things that Wolfpack fans love in their quarterbacks.

Wilson had a huge impact on NC State, leaving legacy moments like throwing a late touchdown to tight end George Bryan to knock off Florida State or throwing a Hail Mary pass on the goal line to help take down UNC.

Wilson was a fan favorite and it hurt the fan base to see him leave in 2011. It was hard to watch him be successful at Wisconsin for his senior year, which makes it appropriate to pull a quote from an article from Jan. 8, 2011. In an article that recapped the Champs Sports Bowl victory over West Virginia, Wilson’s last game as a member of the Wolfpack, Wilson discussed his future with the team.

“I’ve been blessed to have the opportunity to play football and baseball my whole life,” Wilson said. “If it happens in the future that I can still do that, or if it doesn’t, whatever, but I know that playing for Coach [Tom] O’Brien and playing for N.C. State - whether I do come back or not - has been a great opportunity and a great blessing.”

Wilson never wanted to leave NC State, and neither did the fans. O'Brien's decision to stick with Mike Glennon at quarterback for the 2011 season is still a sour topic with Wolfpack fans. However, fans can still take solace in how Wilson still embraces his alma mater. With semi-frequent visits and the shoutouts he gives North Carolina on Sunday Night Football, the media-darling Wilson still has a special place in his heart for the university.