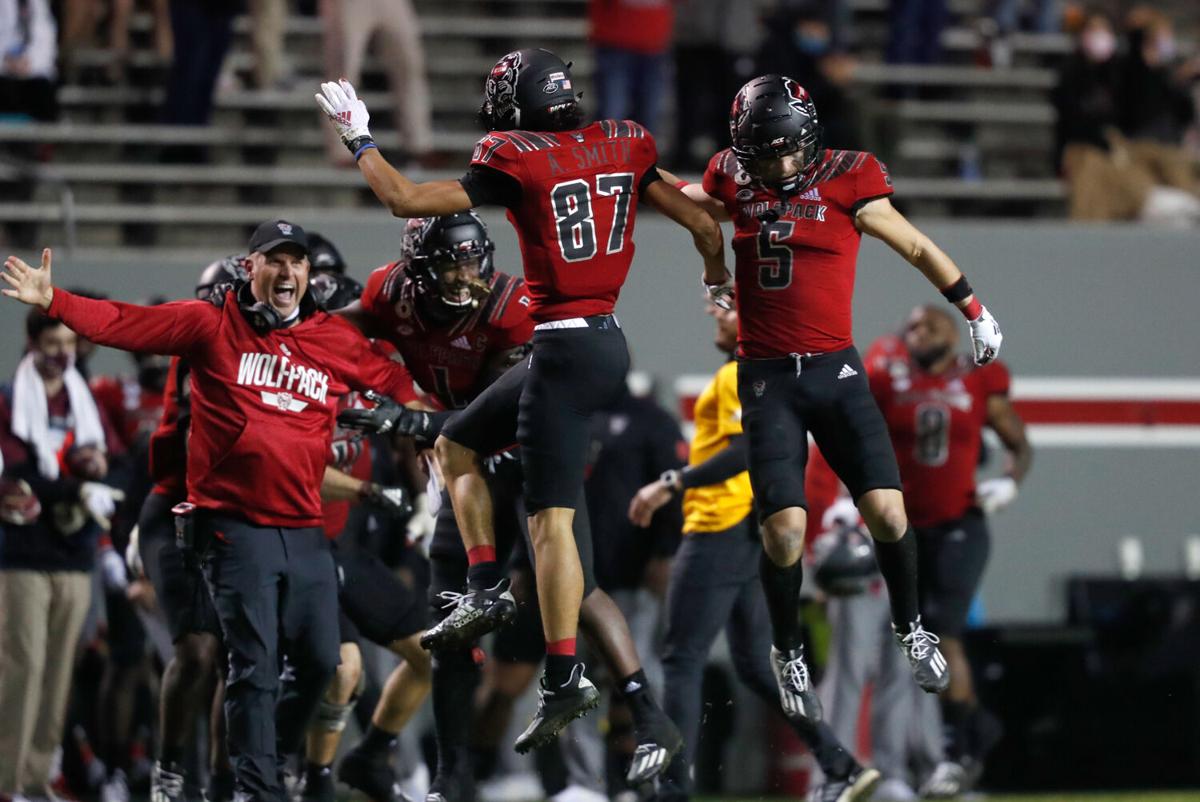 N.C. State’s Anthony Smith (87) celebrates with Thayer Thomas (5) after Smith recovered a fumble during the second half of N.C. State’s 38-22 victory over Florida State at Carter-Finley Stadium in Raleigh, N.C., Saturday, Nov. 14, 2020. 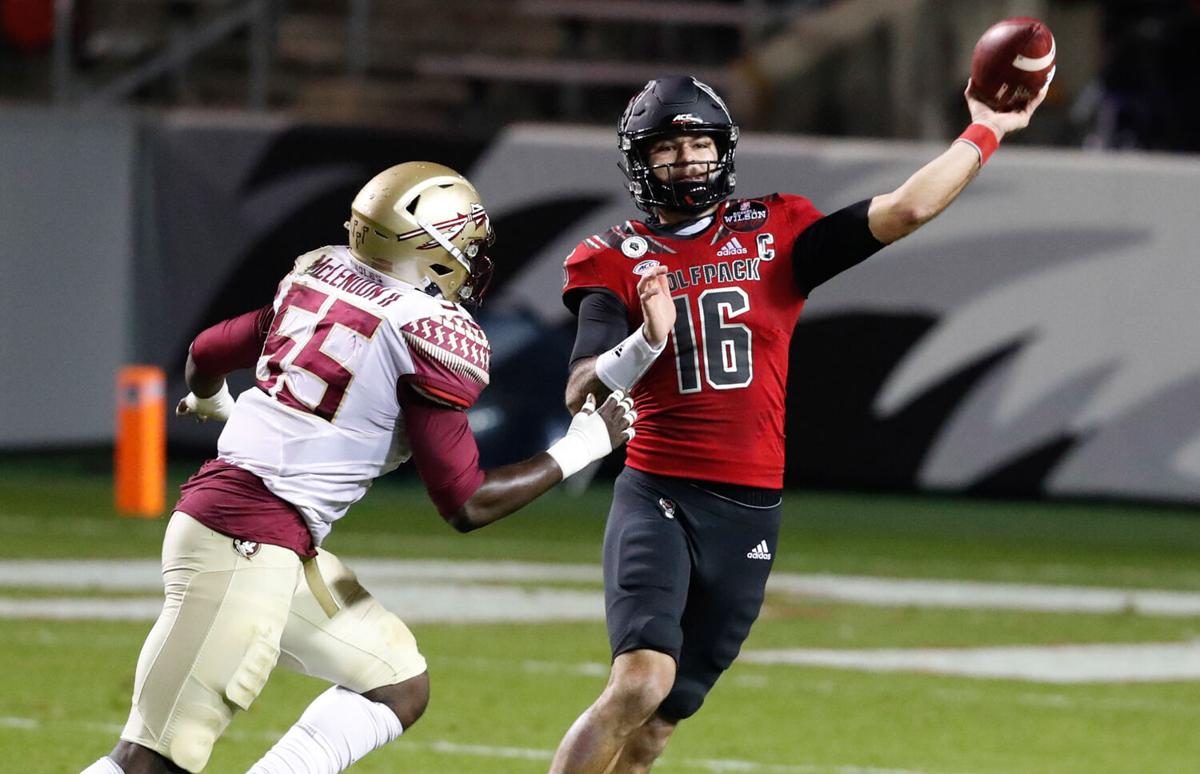 N.C. State’s Anthony Smith (87) celebrates with Thayer Thomas (5) after Smith recovered a fumble during the second half of N.C. State’s 38-22 victory over Florida State at Carter-Finley Stadium in Raleigh, N.C., Saturday, Nov. 14, 2020.

After a heartbreaking loss to a highly-ranked Miami team last week, NC State rebounded with a 38-22 win against Florida State Saturday night at Carter-Finley Stadium. Florida State made headlines with how many of its players the team would be without, but NC State and redshirt junior quarterback Bailey Hockman took care of business.

The win against Florida State was head coach Dave Doeren’s 52nd as a member of the Wolfpack, putting him in a tie with Dick Sheridan for second place among the all-time winningest coaches at NC State.

“It’s hard to lose a game like we did against Miami,” Doeren said. “So I’m really proud of our players and the way they invested in this game. I’m happy to get the ‘W’ and to get back in the win column.”

Right off the bat, Hockman replicated his fast start against Miami last week with another opening-drive touchdown, this time to senior wide receiver Emeka Emezie. However, it was redshirt junior receiver Thayer Thomas who was Hockman’s favorite target on the drive, hauling in five catches for 58 yards, including a crucial catch to keep the drive alive on third-and-12.

The offense marched down the field once again on the second drive, and if not for a failed fourth-down conversion at the Florida State 10-yard line, NC State could very well have been up two touchdowns after two drives.

Unlike Hockman, the defense didn’t duplicate its Miami performance against Florida State. Instead of putting pressure on the offense to keep scoring, the Wolfpack defense forced a quick three-and-out on the Seminoles’ first drive and a short second drive that produced a single first down. At the end of the first quarter, the Wolfpack defense stonewalled Jashaun Corbin and the Seminole wildcat attack on fourth-and-1, giving NC State great field position.

The drive ended with a touchdown catch from Thomas, who had already made several catches up to that point, and the Wolfpack got the 14-point lead it had missed out on earlier.

Down two scores, Florida State started playing more desperate football, going for it on fourth-and-1 and converting. Eventually, the team made it to the NC State side of the field for the first time, but a dropped catch by Warren Thompson on third-and-10 gave the Wolfpack defense a break and forced the ‘Noles to settle for a long field goal.

On their fourth drive, Hockman and the passing offense looked great against Florida State once again, even converting a fourth-and-1. But instead of the Florida State offense stopping NC State, it was the Wolfpack offense that stopped itself as redshirt sophomore wide receiver Devin Carter got called for holding on the fourth-down-conversion attempt, and the NC State punting team got its first action of the night.

Florida State was unable to capitalize on the penalty, but NC State took the opportunity to extend the lead as Hockman ran it in for a score with 1:32 left in the first half. NC State shut the door on Florida State’s efforts to get a late score as junior nickelback Tyler Baker-Williams intercepted an errant pass from FSU’s Tate Rodemaker, the second true freshman quarterback to make an appearance this game for the Seminoles after Chubba Purdy was benched. Either way, NC State walked into the break with a 21-3 lead.

Florida State had the opportunity to get its offense into a rhythm, and for a moment, it looked like the Seminoles had some momentum. Purdy came back into the game and converted a long third down with his legs. However, a facemask on the Seminoles stalled the Florida State drive and forced a three-and-out.

Despite the 21 points NC State had put up, it struggled to run the ball, racking up only 47 yards on the ground in the first half. After Thomas got a career-high 10th reception on the Pack’s first possession of the second half, sophomore running back Zonovan Knight scored from 18 yards out just a play later.

Thomas finished the game with 11 receptions for 135 yards and two touchdowns. After the game, he talked about the work the offense put in so that it could prepare for each game this season.

“The quarterbacks and the receivers worked their butt off,” Thomas said. “And on Saturdays, we show that off. One guy might have a good game and another guy for another game. We practice so hard and now we’re reaping the rewards. I’m a team player, but Bailey [Hockman] told me he’d look my way a lot, and so this night happened to be my night.”

Florida State continued some of the promising offense it showed early in the second half, and while the NC State defense forced a fourth down three times on the drive, the Seminoles converted all three of them, including a wildcat run from Corbin that went to the end zone. A two-point conversion by the ‘Noles failed, but the lead had shrunk to 28-9.

After the score, the Florida State defense helped out its offense by forcing NC State’s first three-and-out of the game. Just as the momentum started to swing, Florida State muffed the punt return, giving NC State the ball back with excellent field position. Thomas added to his career night with a 24-yard score.

With a 35-9 Wolfpack lead, offensive coordinator Tim Beck took some time to sift through his offensive arsenal. First up was a double reverse to freshman Porter Rooks, but a deep throw by Hockman to the end zone resulted in an acrobatic interception by Jarvis Brownlee Jr., who managed to keep possession of the ball by keeping it between his legs. The turnover was followed up by a 69-yard touchdown pass from Purdy to Ontaria Wilson.

While it didn’t finish the game like it started it, the Pack did crawl down the field at a methodical pace. NC State didn’t score a touchdown, but it did get a field goal to extend the lead to 38-16 on a drive that lasted close to five minutes. Florida State scored a touchdown late to make it 38-22, but with no timeouts left, Florida State was forced to watch NC State kneel the ball and the clock tick to zero.

It was Hockman’s best game as a member of the Wolfpack, collecting 24 completions for 265 yards, three touchdown passes and one pick. At the end of the game, however, Hockman was filled with praise for his teammates and the role they played in getting the victory.

“The guys are playing great,” Hockman said. “The offensive line played their butts off, the wide receivers are playing great and the running backs are playing great. When everyone’s playing well and does their job, our chemistry keeps on building. That’s why you see our execution and our love for each other.”

NC State has an opportunity to get a resume-building win next week, as it takes on an undefeated Liberty Flames team. The game will take place at Carter-Finley Stadium Saturday, Nov. 14, with kickoff set for 7:30 p.m.