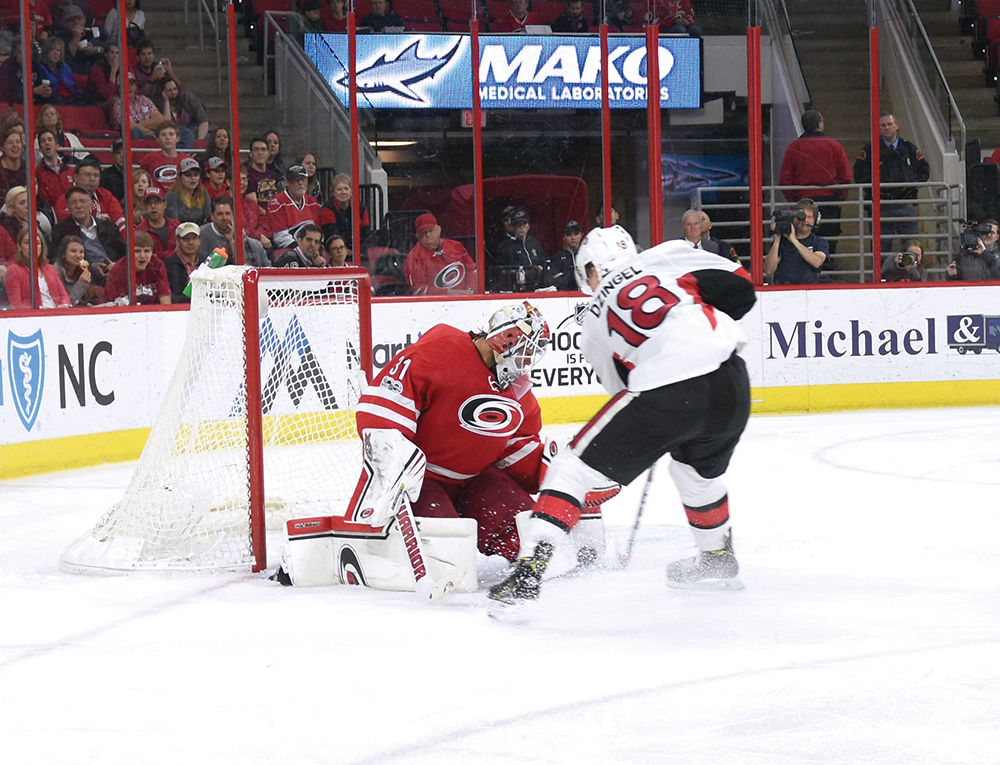 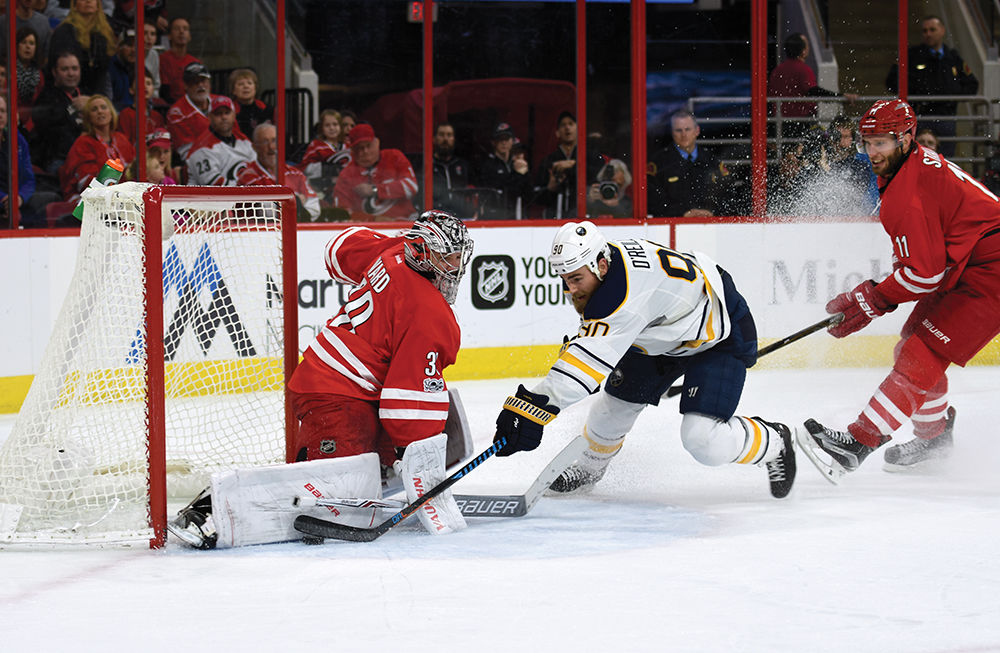 Hurricanes goalie Cam Ward stops a shot by Sabres forward Ryan O'Reilly on Jan. 13, 2017 in PNC Arena. Ward made 36 saves in the Hurricanes 5-2 victory over Buffalo. The win also marked Ward's 600th game in the NHL, all of which he played for the Hurricanes.

Hurricanes goalie Cam Ward stops a shot by Sabres forward Ryan O'Reilly on Jan. 13, 2017 in PNC Arena. Ward made 36 saves in the Hurricanes 5-2 victory over Buffalo. The win also marked Ward's 600th game in the NHL, all of which he played for the Hurricanes.

While several teams in the NHL continued their quest for the Stanley Cup, and others took a moment to rest in the early part of their offseason, the Carolina Hurricanes and general manager Ron Francis got an early jump on their summer. Francis made a quick strike to solve the team’s biggest issue last season: goaltending. He shipped a third-round pick in 2017 to the Chicago Blackhawks for the negotiating rights to then-pending unrestricted free-agent goalie Scott Darling, then signed him to a four-year deal a week later.

In signing Darling, Francis took a strong first step in solving the goalie issues, but it left him with work to do. The Canes now have three goalies under contract for next season, with the underperforming duo of Cam Ward and Eddie Lack each left with a year on their current deals. The Canes will need to move one or both of them prior to the start of next season.

Carrying three goalies on a roster does not work, for a multitude of reasons. There are only two nets in practice, only so many starts to go around and it creates an awkward situation with not enough playing time for three. The New York Islanders’ struggles with this situation have been well-documented the past two years. The Canes experienced some of it themselves with Ward, Anton Khudobin and Justin Peters during the 2013-14 season.

Another reason a goalie will need to go comes from a monetary standpoint. Darling will make $4.15 million next season, Ward $3.3 million and Lack $2.75 million. That adds up to over $10 million on a position that comprises one spot on the ice on any given night. The budget-conscious Hurricanes are unlikely to be willing to spend that. So, the team will have to move a goalie out. Fortunately, it has a few options for doing so.

Expansion- At the NHL’s expansion draft on June 21, the incoming Vegas Golden Knights will take one player from each team’s current roster. Goalies are eligible to be taken, so Vegas could, in theory, solve the Canes’ crowded crease conundrum right then and there.

The Golden Knights, however, are likely to have three better options than either goalie who contributed to the NHL’s fifth-worst team save percentage last season. The Canes would likely need to provide Vegas with an incentive to take either goalie. Francis could offer Vegas general manager George McPhee one of his plethora of draft picks in the 2017 entry draft in exchange for taking Ward or Lack off his hands, both keeping his club from losing a skater and making the necessary subtraction in net.

Trades- Despite Ward and Lack’s poor performances the past two seasons, a team may be willing to take a gamble on Ward’s Stanley Cup pedigree or that Lack can return to the form he displayed earlier in his career with the Vancouver Canucks.

The Canes would likely be looking at a mid-to-late draft pick, at best, for either netminder, unless one is involved in a larger deal with more pieces, or one that sees the Canes exchange a goalie for a high-salaried forward or defenseman that may be a fit in Carolina. The Winnipeg Jets, Calgary Flames and Philadelphia Flyers are all teams that could stand to add a goalie at the present.

In addition, if it does not take Ward or Lack in the expansion draft, Vegas could still help the Canes indirectly. The Golden Knights taking a goalie from another team could open up trade talks between said team and the Hurricanes as that team looks to fill its newly created opening in net. The Washington Capitals, Pittsburgh Penguins, New York Rangers, Colorado Avalanche and Florida Panthers all could be in danger of losing a member of their current tandem to Vegas and look to a member of the Canes’ three-headed monster as a replacement.

Buyout- If all else fails, the Canes could always buy out the remaining season of either Ward or Lack’s contract. Buyouts are, for obvious reasons, never an attractive option, as they mean paying someone to not play for your team. However, if the Canes cannot find a trade partner or entice Vegas to take a goalie off their hands, this may be the necessary route.

A buyout would take the needed step of removing a goalie from the roster, and give either Ward or Lack a chance at a fresh start elsewhere rather than spending most of next season in the Hurricanes’ press box. In addition, neither buyout would be overly expensive. While Carolina is still paying forward Alexander Semin $2.33 million until approximately the end of time, neither Ward nor Lack’s buyout would be nearly as onerous.

Buying out Ward would only cost the Canes $1.03 million over the next two seasons, and Lack would cost an even $1 million a year, saving a small amount on either’s salary for next year. Given that Lack’s buyout is slightly cheaper, Ward’s history with the team and the fact that the veteran has posted better numbers with Carolina the past two seasons than his Swedish counterpart, Lack would seem to be the most likely option if the Canes choose to go this route.

While the Canes’ current situation with three netminders on the roster is not ideal, Francis has plenty of time and a few options to solve the issue. Any of the three avenues above would be more than feasible choices for cutting the Canes’ goalie carousel down to two.