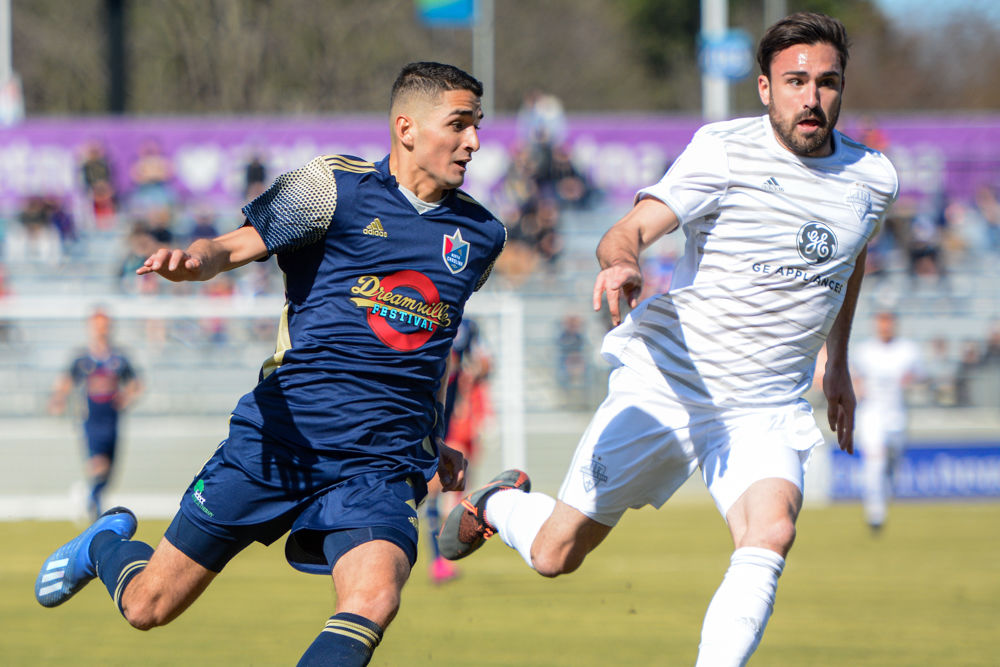 Midfielder Manny Perez races toward the ball at the NCFC game against Louisville City FC on Saturday, March 7, 2020 at Sahlen’s Stadium at WakeMed Soccer Park. The NCFC lost the game 0-1. 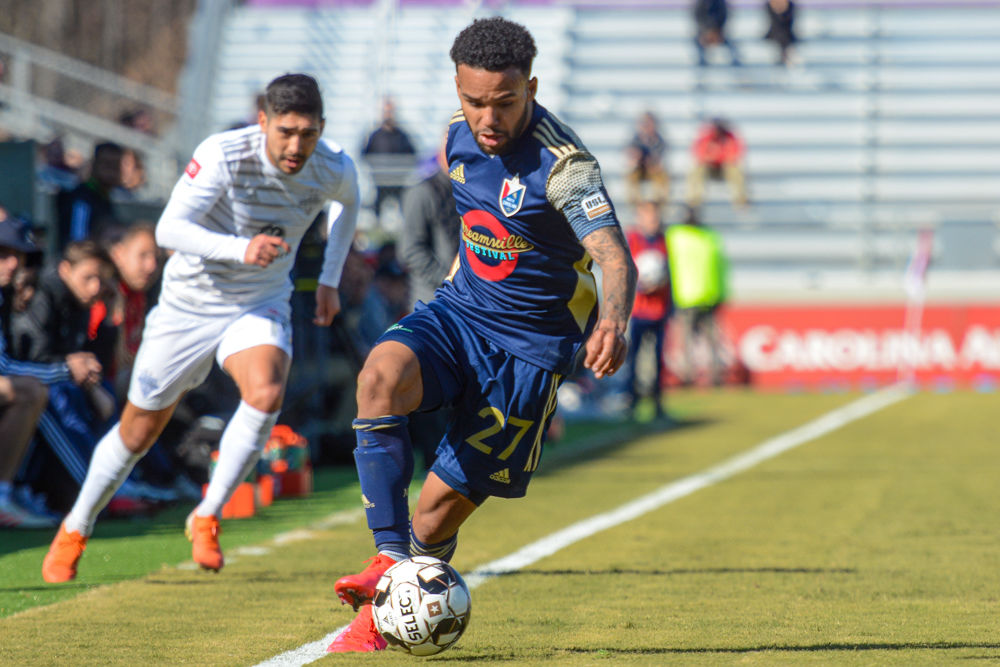 Defender DJ Taylor moves the ball down the field for the NCFC at the game against Louisville City FC on Saturday, March 7, 2020 at Sahlen’s Stadium at WakeMed Soccer Park. The NCFC lost the game to Louisville 0-1.

Midfielder Manny Perez races toward the ball at the NCFC game against Louisville City FC on Saturday, March 7, 2020 at Sahlen’s Stadium at WakeMed Soccer Park. The NCFC lost the game 0-1.

Defender DJ Taylor moves the ball down the field for the NCFC at the game against Louisville City FC on Saturday, March 7, 2020 at Sahlen’s Stadium at WakeMed Soccer Park. The NCFC lost the game to Louisville 0-1.

While NCFC was the better of the two teams in the first half, crucial halftime adjustments from Louisville City FC pushed the reigning USL Championship Easter Conference champions over NCFC.

The hosts nearly capitalized on their solid opening half as Robbie Kristo connected with a Nazmi Albadawi cross, forcing a brilliant save out of Louisville City FC’s Ben Lundt. With just inches denying Kristo an opening goal, the game went into the half tied at 0-0.

After the break, Louisville City had answers to all of the problems that NCFC caused in the first half. The first problem that the visitors went about solving, stopping Manny Perez. Step one to solving the Perez problem was a change of personnel as Oscar Jimenez was replaced by Akil Watts at the left back position.

“We were having a problem with Perez,” said Louisville City head coach John Hackworth. “Oscar Jimenez is usually one of the best left backs in the league. But his groin was really tight we we were forced to make that change… Akil I thought did a really good job in two areas. One, he went one versus one with Perez a couple of times and kind of solidified the fact that we just weren’t gonna give him time and space. Then, Akil also got forward and he got forward by coming inside.”

Perez caused problems for Louisville City with a combination of his speed, trickery and ability to combine with the underlapping D.J. Taylor. While NCFC head coach Dave Sarachan confirmed after the match that Perez picked up a knock, which ultimately led to his 64th-minute substitution, the former NCFC academy duo caused problems up and down the right flank.

“He’s a pacey player just like me,” Perez said. “We understand each other when we are running on and off the ball. He makes runs inside and I make runs outside so the connection is there. Plus I played with him in the academy so we’ve always had a strong connection there and I think that has just carried on to the professional level.”

In addition to stopping Perez, Louisville focused on limited the play-making ability of NCFC’s two strong central midfielders, Nazmi Albadawi and Ben Speas. The two picked apart the Louisville City defense in the first half, leading to five total shots, two of which found the target, but in the second half, NCFC failed to find the target a single time.

“To be fair, our press was broken in the first half,” Hackworth said. “... We talked about coming here and being a little more pragmatic… I really thought we dropped a lot in that first half so that was one of the things we talked about, ‘Hey, let’s be us. Let’s press them and when one guy is going, we’re gonna go.’ We did a much better job in the second half.”

Louisville City finally capitalized on its strong start to the second half, opening the scoring in the 63rd minute. Cameron Lancaster scored a true poacher’s goal, picking up the ball after a deflected shot got by the NCFC defense and putting it around NCFC’s Alex Tambakis.

“There was a bit of a pinball action in the box and then fortunately it sort of fell to me and that I saw the keeper sort of cheating one way so I put it the other way,” Lancaster said. “I know there was a question about offside but I haven’t seen it back yet. So, it counts.”

Though Kristo had NCFC’s best chance of the afternoon, the striker was largely ineffective for large stretches of the game. Mainly used as a late-game substitute last season, Kristo struggled against Louisville City’s two center backs, Jimmy Oxford and Wes Charpie, who both had the size and strength to deal with his bullish style of play. Kristo got increasingly frustrated as the game wore on and the forward picked up a yellow card in the 88th minute for a foul at midfield.

“We continue to urge Robbie to be as high as he can be and be dangerous and be an outlet for us,” Sarachan said. “As any center forward will get frustrated they tend to drift a little bit further deep to get a touch on the ball… I think he felt that there were times he needed to drop off the center backs to allow some space. I’d prefer him to be higher than underneath.”

While the club made a host of new signings over the offseason, Sarachan stuck with familiar faces to start the game as all 11 of his starters were on last year’s roster. Two new signings, Hadji Barry (64th minute) and Daniele Proch (87th minute) made debut appearances off the bench, but neither were able to make much of an impact.

“It was a hard game to evaluate with [Barry],” Sarachan said. “It wasn’t like he was on the ball a lot. I think he tried to give us energy and tried to provide width and be available in the attacking third. I don’t think we found him enough.”

NCFC will attempt to bounce back from its opening loss next weekend as it takes on Philadelphia Union II at Sahlen’s Stadium on March 14, kickoff is set for 2:30 p.m.

“It’s going to be 34 games and so we know this first game is going to show some, I wouldn’t say rust, but some good and bad moments,” Sarachan said. “We just didn’t quite make a play in the final third today.”