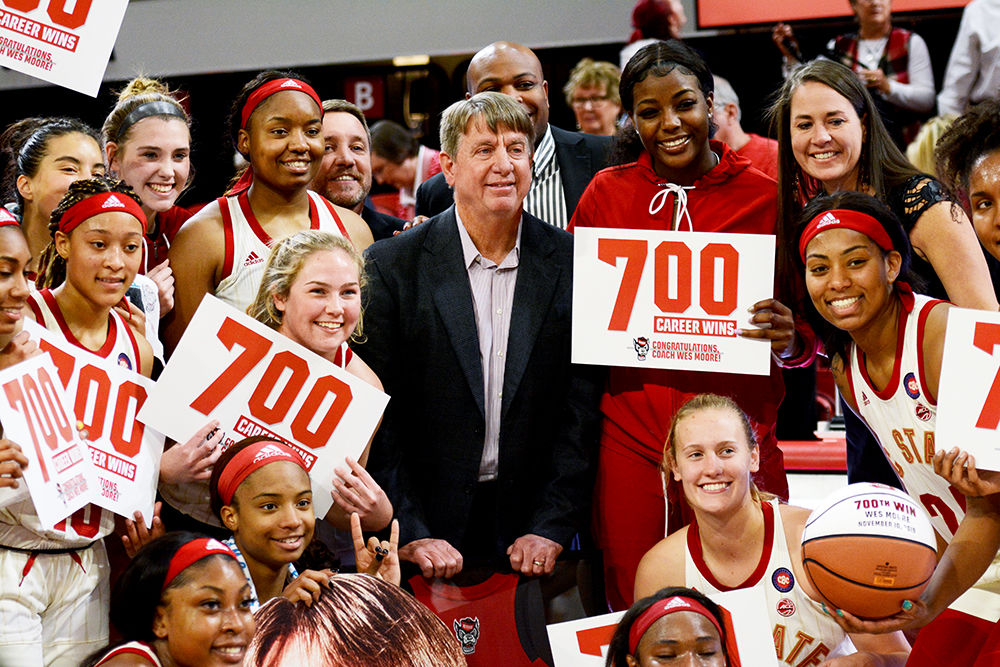 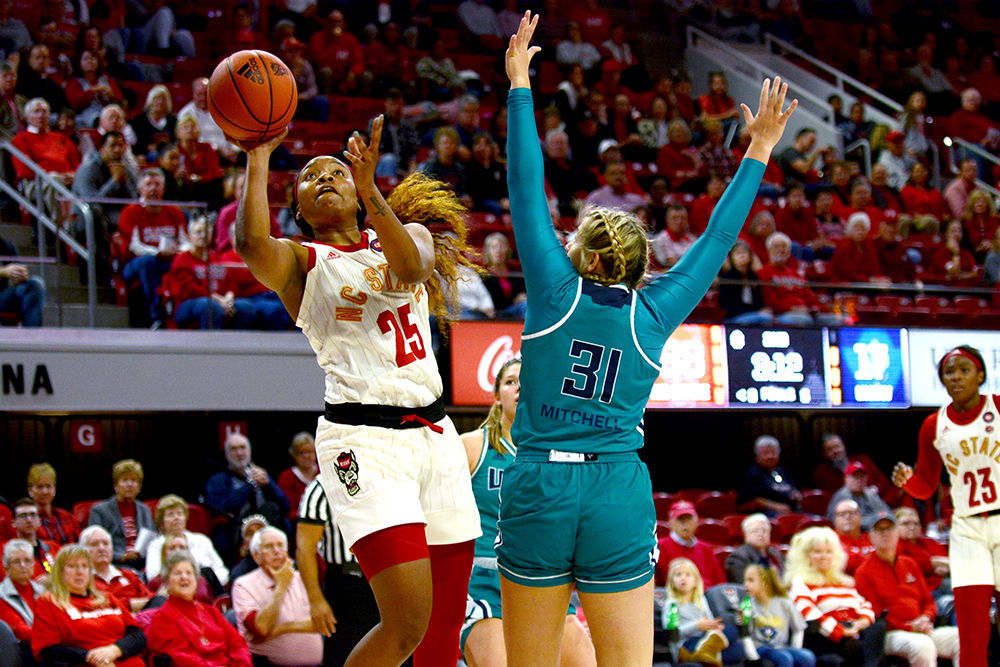 The NC State women’s basketball team picked up its second win of the season Sunday afternoon, riding a barrage of 3-pointers to an 80-40 win over UNC-Wilmington at Reynolds Coliseum.

The win gave NC State coach Wes Moore his 700th career win as a head coach. One of only 22 NCAA Division I coaches to reach 700 wins, the 2019 AP National Coach of the Year Runner-up Moore now has 142 wins at the helm of the Wolfpack program.

Moore was honored in a postgame ceremony, where he was awarded a commemorative jersey and plaque and watched special shoutout videos on the jumbotron from former players, including DD Rogers, Miah Spencer and Ashley Williams, among others.

“I appreciate Boo [Corrigan], NC State administration and everyone for making that a special ceremony after the game,” Moore said. “I especially thank the players. I like to say, in 30 years I haven’t grabbed a rebound or made a bucket … I’ve had a lot of great players, and I’ve rode their coattails.”

Freshman guard Jakia Brown-Turner nailed back-to-back triples in the opening minutes of the game, and the Wolfpack (2-0) never looked back from there, sailing past the Seahawks (0-2) for an easy win. NC State shot 12 for 29 from the 3-point line, and eight different Wolfpack players hit at least one triple.

“I always say that I don’t ever want to have a player out there, if at all possible, that can’t shoot the 3,” Moore said. “It’s great to be able to make the defense respect all five players’ [3-point shooting abilities] and really spread the court.”

After scoring eight of the Pack’s first 10 points in the game, Brown-Turner finished with 11 points in the contest, to go along with three rebounds, an assist and a block in 28 minutes.

Around the four-minute mark of the second quarter, NC State head coach Wes Moore made the decision to play a full-court press, and the defensive pressure completely stifled the Seahawks.

The Wolfpack’s full-court press forced four turnovers in the final minutes of the first half, holding the Seahawks scoreless and helping to break the game wide open as the Pack closed out the half on a 22-3 run.

“We don’t really press that often,” said sophomore center Elissa Cunane. “I think one emphasis this year is to put a lot more pressure on [opposing teams] and force more turnovers. So I think for the first time, we’ve really done that, we executed it well.”

NC State’s red-hot first-half performance beyond the arc resulted in a 44% clip from deep and a stellar all-around offensive performance. On top of its scorching-hot shooting, the team collected seven steals and forced the Seahawks into 14 turnovers.

Cunane led the Pack in scoring, finishing the game with 18 points on 64% shooting, with nine rebounds, two assists and two blocks in just 20 minutes. Cunane also unleashed a new weapon in the form of her 3-point shooting, taking two shots from beyond the arc and connecting on both.

“[Hitting two 3-pointers] felt good,” Cunane said. “Before the game, I was warming up, and I was like, ‘Well, I can shoot my 3s.’” I’ve been working on them a lot, so it feels good that they’re finally transitioning into my game.”

NC State’s tenacious on- and off-ball defense gave UNCW fits all half long, and its offense was never able to find a rhythm. The Seahawks didn’t record an assist on a single made bucket and saw just seven shots from the field find the bottom of the net in the first half.

NC State opened the second half with much of the same from the first half. Cunane and junior guard Kai Crutchfield sank 3-pointers on back-to-back possessions as the Wolfpack continued to fire away from deep.

“In practice, we shoot a lot of 3s,” Brown-Turner said. “So when we come out in the game and knock them down, that’s just what we’ve been practicing.”

Despite the milestone win, Moore was more focused on the present and future than looking back at past wins.

“It’s just another win,” Moore said. “I will definitely have the computer on game film, either watching us or start looking ahead to Lamar, who we have Thursday. That’s the thing about this time of year; it’s on now. Every night is film and preparation.”

The Wolfpack returns to Reynolds Coliseum on Thursday, Nov. 14, when it takes on the Lamar Cardinals, which sit at 0-1. The game will tip off at 7 p.m.