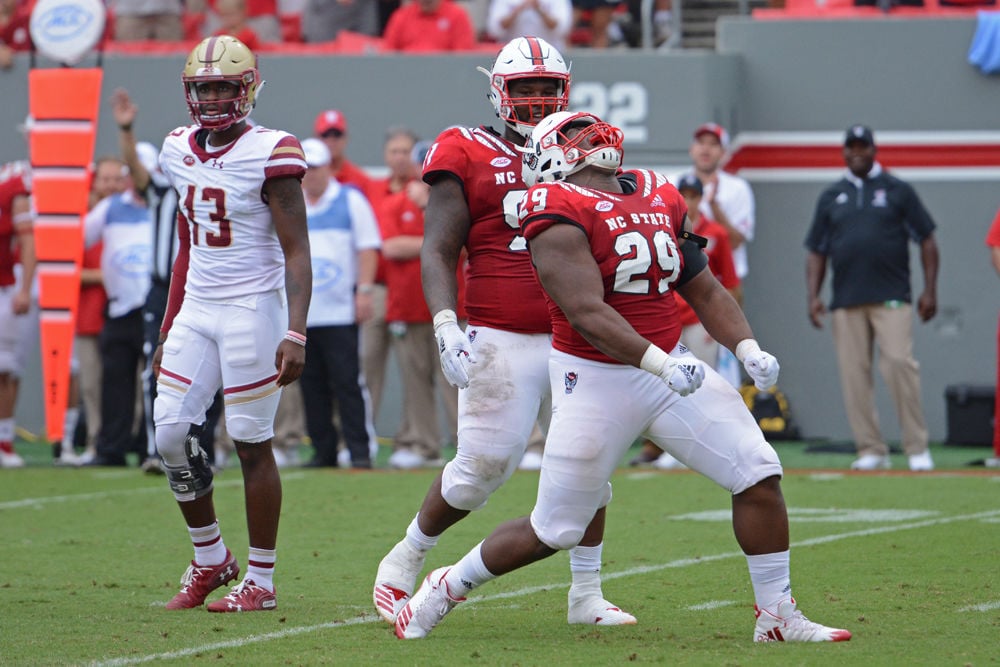 Freshman defensive tackle Alim McNeill celebrates during the game against Boston College on Saturday, Oct. 6, 2018 at Carter-Finley Stadium. McNeill had two total tackles including one assisted tackle for loss as the Wolfpack won 28-23. 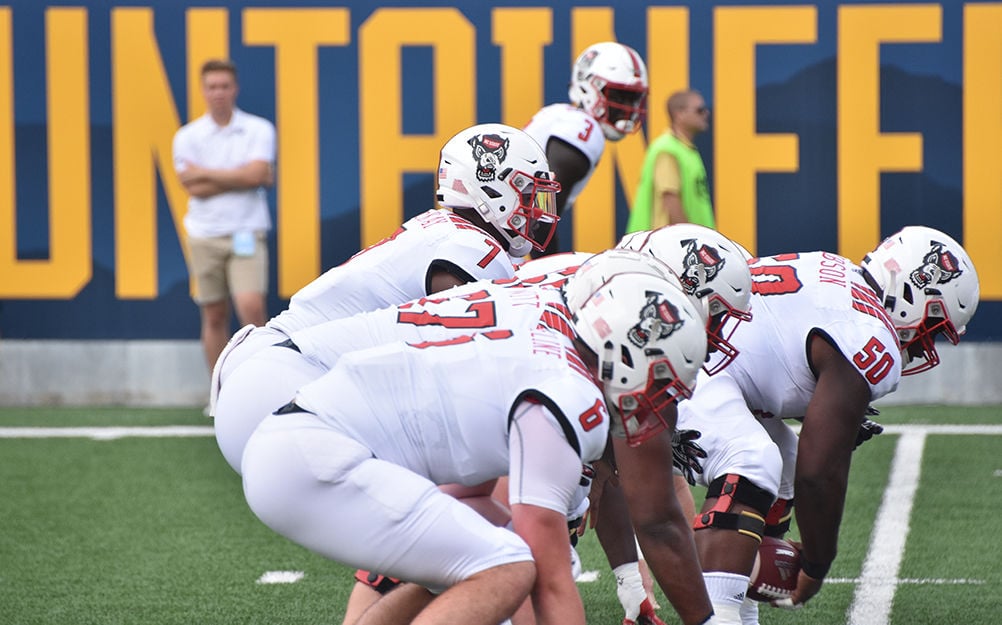 NC State's offensive line warms up before its game against West Virginia on, Sept. 19 2019 in Milan Puskar Stadium. The Wolfpack lost, 44-27.

Freshman defensive tackle Alim McNeill celebrates during the game against Boston College on Saturday, Oct. 6, 2018 at Carter-Finley Stadium. McNeill had two total tackles including one assisted tackle for loss as the Wolfpack won 28-23.

NC State's offensive line warms up before its game against West Virginia on, Sept. 19 2019 in Milan Puskar Stadium. The Wolfpack lost, 44-27.

Games are won and lost in the trenches. The good news for NC State is head coach Dave Doeren has to feel good about one side of that equation: his offensive line. On the other side, things are a little more shaky.

On the offensive line, John Garrison has a good problem to have: at least six starting-caliber players with only five slots in which to place them. One of those six is graduate student offensive tackle Tyrone Riley, who missed last year with a broken bone in his foot. Riley’s fully recovered and ready to challenge for a starting spot.

“This is probably one of the best offensive lines we’ve had at State, so it's definitely a lot of competition,” Riley said. “We all push each other to be better, man. This is good competition. I think it's gonna work out for the best.”

“Now he needs to continue to improve on it, from little things [like] false stepping and making sure he's taking the proper angles,” Garrison said. “Those are all things that come with time and come with experience, and you saw him grow during the season. His athleticism, his God-given abilities, really put him in the position he was in, and you saw the growth and I'm excited about watching him grow even further.”

The defensive line lost two starters to the NFL in Larrell Murchison and James Smith-Williams, leaving Alim McNeill as the main force on that side of the line. A bigger loss may have been position coach Kevin Patrick, had he not been replaced by Virginia Tech’s Charley Wiles. Wiles has made an immediate impact on the group.

“Coach Wiles has been more than wonderful,” said Penn State grad transfer defensive end Daniel Joseph. “He’s taught me a lot, and he’s going to continue to teach me a lot more to just take my game to the next level. With him being at Virginia Tech for, what, 25 years I think it was, and him having that experience alone is something that you can’t really go to a store and buy. It’s always good being around someone that has that experience and can obviously teach me and teach those around me as well.”

With new defensive coordinator Tony Gibson likely to stick to his favored 3-3-5 defense for the season, it’s important that the line wins at the point of attack, so the team’s linebackers can shine. Besides McNeill, it remains to be seen who will step up to provide production.

“The one thing that I personally focus on is preparation, both on and off the field,” Joseph said. “I've come to realize that was really what helps separate the good from the great, or the great from the elite, is how you prepare, and how you prepare yourself for whoever the opponent may be or whatever that is in life. So, for me, preparation has been very key.”

NC State’s defensive line is full of young, blue-chip talents, all yet to make a strong impact on the field. Joseph singled out redshirt freshman defensive tackle C.J. Clark as an impressive young player, and a couple of the freshmen newcomers are showing potential.

“Nick Booker[-Brown] for sure is a kid that, at first glance, you'll never think he can do things he can do, but that kid is an athlete for sure,” Joseph said. “He's a ballplayer. Claude [Larkins] as well, he's definitely a kid that's gonna be very good in the near future as he just continues to progress along, and prepare himself and get better every day.”

They’re going to have to get better quickly because it’s never been more important for a team to have strong depth. Whole position groups may be wiped out by COVID-19 infections and contact tracing, meaning third-string players and even walk-ons may end up seeing significant time. While that doesn’t hurt so much for position groups like running backs, which only field a single player at a time, the difference is drastic on the line. And it’s up to the coaches to make sure their players are ready, all of them.

“You never know who's gonna be in that game,” Joseph said. “Depth chart, honestly, this year if anything, shouldn't really be a factor. And it hasn't been a factor for me. Because at the end of the day, everybody needs to be ready and everyone needs to be able to play at any given point in time of the season like they're the starter.”

After a disastrous carousel for the quarterback position in 2019, there is no question who the starter is this season. Devin Leary started the last five games last season and has all the experience he needs to be the play caller.

Rushing ready to repeat while receivers have something to prove

The Wolfpack running backs are the most exciting aspect of the NC State offense, returning the dynamic trio of Zonovan Knight, Jordan Houston and Ricky Person Jr. while the receivers need to take a step up from last year.

Wolfpack Wager: Return to the books, clash with Hokies