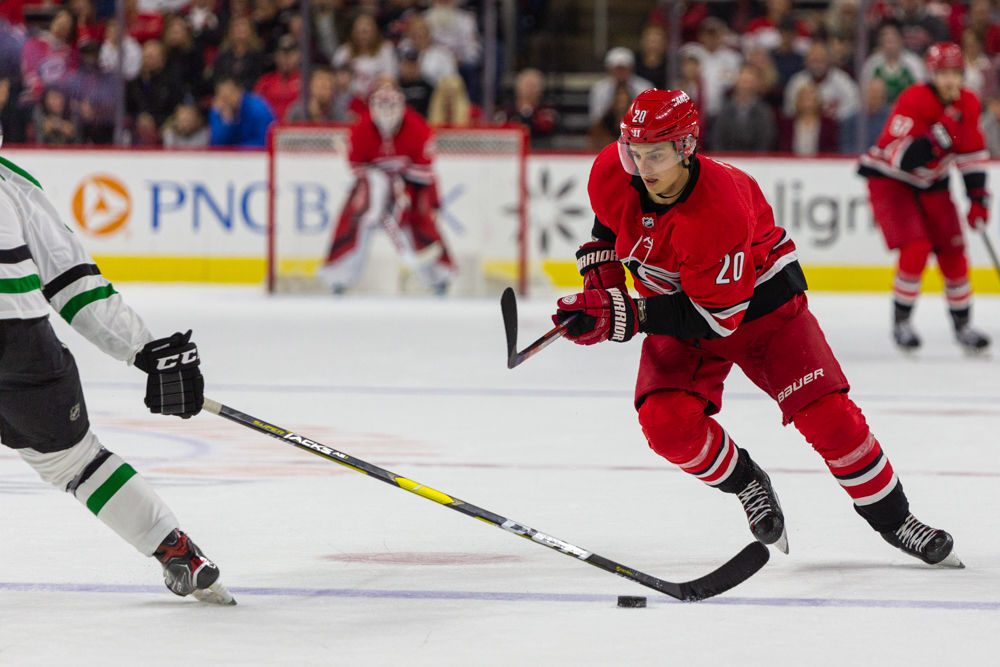 Hurricanes center Sebastian Aho tries to keep possession of the puck versus the Stars on Tuesday, Feb. 25, 2020 at PNC Arena. Aho had one goal on four shots in the 4-1 loss to the Dallas Stars. 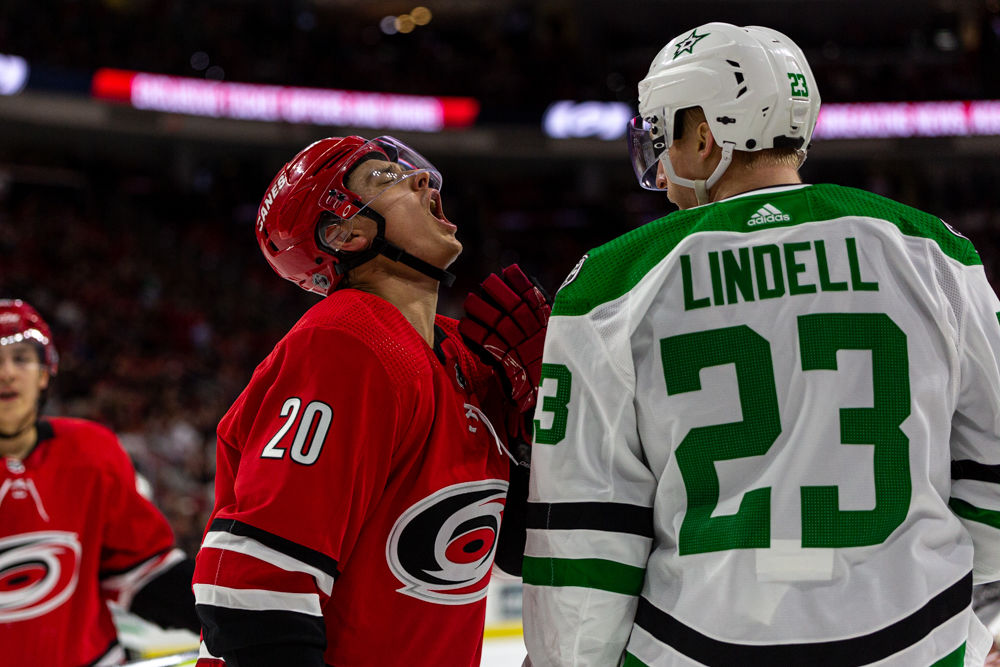 Hurricanes center Sebastian Aho talks and motions at Stars defenseman Esa Lindell on Tuesday, Feb. 25, 2020 at PNC Arena. Aho had one goal and served one penalty in the 4-1 loss to the Dallas Stars. 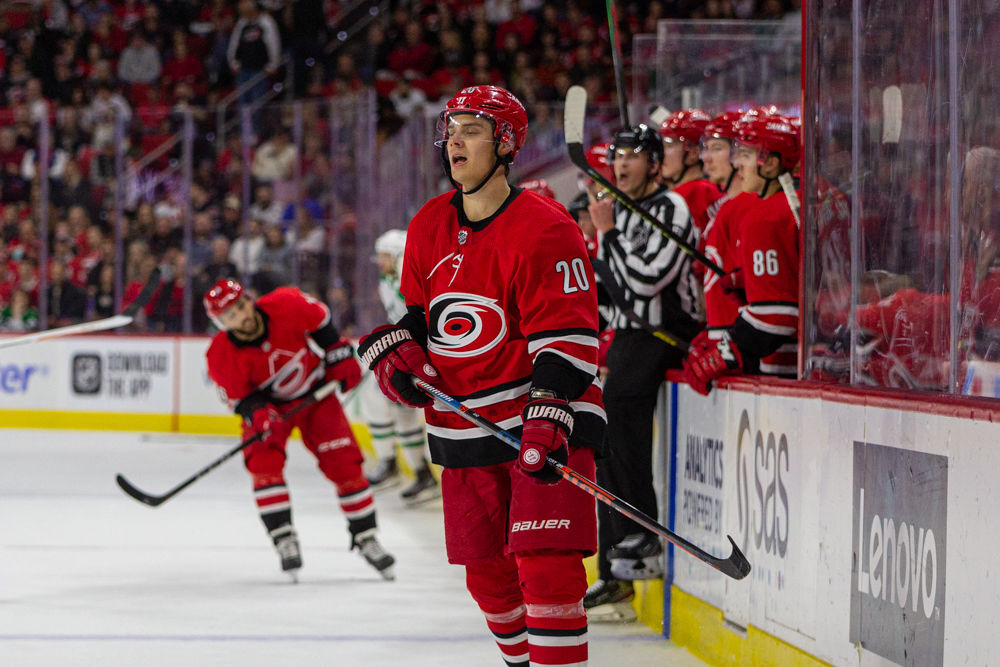 Hurricanes center Sebastian Aho sighs in disappointment versus the Stars on Tuesday, Feb. 25, 2020 at PNC Arena. Aho had one goal and served one penalty in the 4-1 loss to the Dallas Stars.

Hurricanes center Sebastian Aho tries to keep possession of the puck versus the Stars on Tuesday, Feb. 25, 2020 at PNC Arena. Aho had one goal on four shots in the 4-1 loss to the Dallas Stars.

Hurricanes center Sebastian Aho talks and motions at Stars defenseman Esa Lindell on Tuesday, Feb. 25, 2020 at PNC Arena. Aho had one goal and served one penalty in the 4-1 loss to the Dallas Stars.

Hurricanes center Sebastian Aho sighs in disappointment versus the Stars on Tuesday, Feb. 25, 2020 at PNC Arena. Aho had one goal and served one penalty in the 4-1 loss to the Dallas Stars.

The Carolina Hurricanes couldn’t overcome a handful of costly mistakes as they lost to the Dallas Stars 4-1 at PNC Arena Tuesday night.

“It was a weird game for me,” said head coach Rod Brind’Amour. “I liked our start. I thought the first period was good...They protected the lead well, but we still generated quite a few opportunities. We just had a few too many grade-A mistakes. A couple of 3-on-1’s, but those chances still shouldn’t have happened. All in all I was not disappointed with that game. I thought we came and stuck to our game plan. We just couldn’t find a way to get one in.”

Brady Skjei didn’t make a good first impression right off the bat. Under a minute into the game and on his first shift, Skjei turned the puck over along the boards and allowed Tyler Seguin to come in alone. Nedeljkovic made the initial save, but the rebound popped back out to Seguin, who was able to easily fire it back on net and in.

“I thought things for me personally settled down after the first two shifts,” Skjei said. “I was trying not to think too much. Try to just play the game and I thought as the game went on I played better.”

Vincent Trocheck also didn’t have a great first impression. After missing high on two good chances, he took an offensive zone tripping penalty and on the Stars’ ensuing power play, Roope Hintz dangeled past Joel Edmundson and roofed a backhand over Nedeljkovic’s shoulder.

While small mishaps led to larger disparities, all in all, the two new acquisitions played well.

“I thought they both were good,” Brind’Amour said. “[Trocheck] was really good up front and [Skjei] too. He had a couple really good opportunities to score. Jumped in the play. Those first games are always tough especially when you don’t know our systems that well, but I thought they looked really good.”

Skjei played 20:37 and registered five shots and got time on the penalty kill. He had two great opportunities jumping into the plays, but just couldn’t quite convert both times.

Trocheck registered 17:06 playing alongside Martin Necas and Nino Niederreiter at even strength and got time on both the second power-play unit and the penalty kill while also going 12 for 17 in the faceoff circle.

“It was a lot of fun to play with those two,” Trocheck said. “[Niederreiter] and [Necas] both have great vision, they work hard, play on the forecheck. We had possession of the puck quite a bit in the other zone which is all I can really ask for. I had chances that I feel like I should have buried, but if we continue to play like that we’re gonna do well.”

At the tail end of the first, an Edmundson error led to Dallas extending the lead even further. Off an offensive zone faceoff, with less than a minute remaining in the first period, Edmundson was unable to retrieve the faceoff win and was subsequently caught out of position leading to a 3-on-1 for the Stars. They shot high, but the rebound came out perfectly to Jason Dickinson and he made it count.

All three of the first period goals came off of horrendous defensive lapses and couldn’t really be put on the rookie netminder. The Carolina forecheck had been generating chances as well, making the defensive failures even more crushing.

Out for the second period, Sebastian Aho got the ball rolling as he worked a back and forth with Jaccob Slavin ending up with him tucking it in around Anton Khudobin’s pad. It extended Aho’s point streak to 13 games, the longest in franchise history since relocation.

However, yet another defense lapse led to Denis Gurianov rifling one past Nedeljkovic. Haydn Fleury was caught trying to defend against the pass and couldn’t turn to match Gurianov’s speed, but the real issue was Edmundson not covering anybody on the play.

After the second, the Stars simply stopped shooting, decided to sit on the lead, they up only a single shot but mucked up every zone and lane and prevented the Hurricanes from generating any high quality chances.

“We could have done a better of getting in front of them and getting to the net,” said captain Jordan Staal. “They keep it pretty tight, blocking shots and blocking up the front so you got to shoot through them to open up spaces and open up plays. Sometimes it looks like they’re just blocking shots but that’s how you got to break it down a little bit.

While it’s a disappointing loss for the Hurricanes, they will at least get more time to mesh the new teammates into their systems before their next game against the Colorado Avalanche Friday night at PNC Arena.