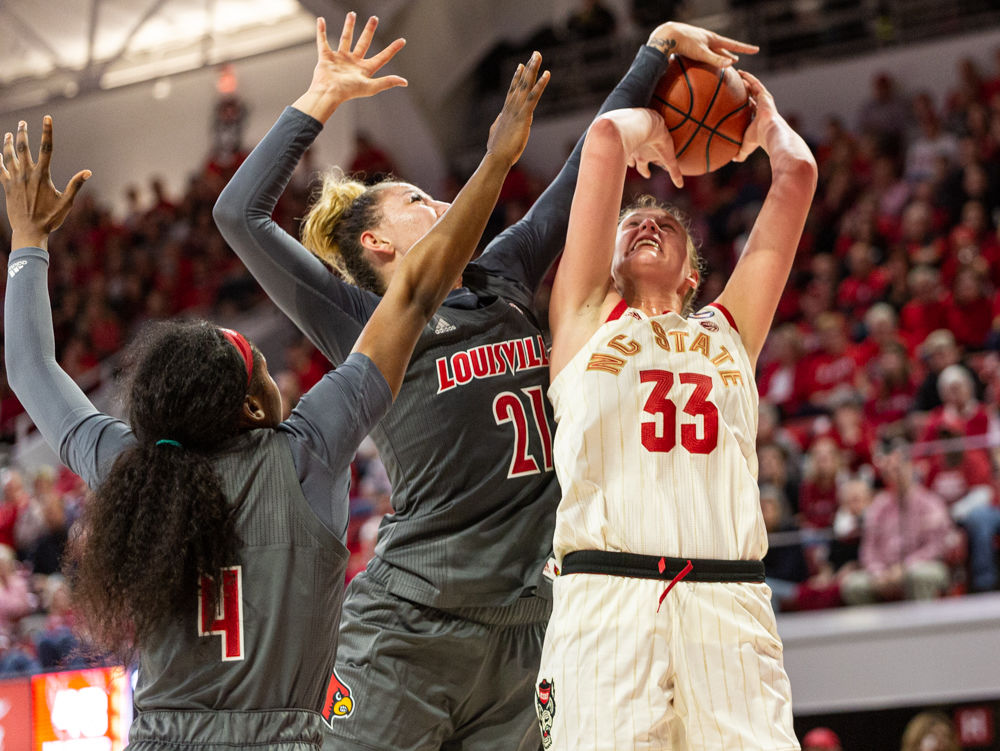 Sophmore center Elissa Cunane is blocked by Louisville forward Elizabeth Balogun on Thursday, Feb. 13, 2020 at Reynolds Coliseum. Cunane went one for 12 from the field and tallied 10 points in the 66-59 loss. 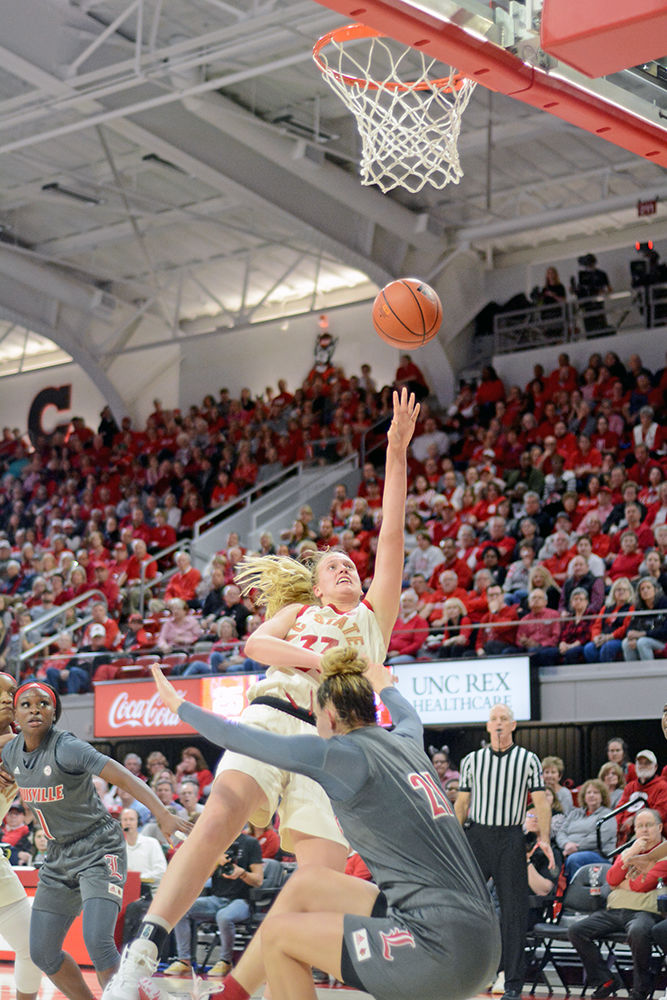 Sophomore center Elissa Cunane falls while going up for a shot against Louisville on Thursday, Feb. 13, 2020 at Reynolds Coliseum. Cunane put up 10 points and the Wolfpack lost to the Cardinals 66-59.

Sophmore center Elissa Cunane is blocked by Louisville forward Elizabeth Balogun on Thursday, Feb. 13, 2020 at Reynolds Coliseum. Cunane went one for 12 from the field and tallied 10 points in the 66-59 loss.

Sophomore center Elissa Cunane falls while going up for a shot against Louisville on Thursday, Feb. 13, 2020 at Reynolds Coliseum. Cunane put up 10 points and the Wolfpack lost to the Cardinals 66-59.

The No. 4 NC State women’s basketball team lost at home in Reynolds Coliseum Thursday night to Louisville, as it couldn’t take advantage of a chance to take a commanding two-game lead in the ACC standings.

The Wolfpack (22-2, 11-2 ACC) wasn’t able to overcome an abysmal first quarter and sophomore center Elissa Cunane’s worst game of the season, as the Cardinals (22-3, 11-2 ACC) rode a big early lead to regain control of the ACC.

“[Louisville] came out ready to play,” said head coach Wes Moore. “They took it to us, and we dug a hole. We took some bad shots, in the first quarter in particular, forced some things. Maybe we were nervous, whatever. We weren’t in attacking mode ... We didn’t really do a good job defending, and they did. They made it tough all night on the block and tried to make us rush shots on the perimeter.”

Cunane was harassed all night by Louisville bigs Kylie Shook and Bionca Dunham. The 6-foot-5 phenom looked out of control all night, hitting on just 1 of 12 shots. Cunane was held scoreless in the paint, with her only bucket being a 3-pointer at the start of the fourth quarter. Although a 7-for-10 showing at the free-throw line propelled her to a double-digit scoring performance, she was never able to find her rhythm offensively.

“They did a nice job of really bellying up on her and making it tough in there for her to move,” Moore said. “She’s got to do a better job of taking an extra dribble or being more explosive with the dribbles she takes and create some space. When you’re 6-foot-5, a lot of times you can get away with not doing that.”

After two free throws from Cunane gave the Pack an early five-point lead, NC State went scoreless for almost seven minutes, missing 10 straight shots. Louisville had already scored nine points in a row before redshirt senior Grace Hunter knocked down a mid-range jumper. Hunter’s bucket gave the Wolfpack its only points in the final 8:07 of the quarter, as the Cardinals closed out the period on a dominant 18-2 run.

Cunane started the second quarter off with two free throws, and the teams traded baskets for most of the quarter. With the Pack in the midst of a 7-0 run that cut Louisville’s 14-point lead down to seven, graduate guard Kaila Ealey snuck in and corralled an offensive rebound as time wound down in the half.

With under 20 seconds to play in the half and Moore hollering from the sidelines to hold the ball for the final shot, Ealey fed Cunane an entry pass into the post. Apparently not hearing Moore, Cunane forced up a contested shot, and Louisville grabbed the rebound and raced down in transition. Cardinals guard Dana Evans then sank a 3-pointer and turned what could have been a momentous series of events for the Wolfpack into a daunting 33-23 halftime deficit.

“We could have taken the last shot, maybe cut [the deficit] to five or four,” Moore said. “But obviously, they were on the other end of the floor; she couldn’t hear me … Now you’re down 10 at halftime. A little bit of a demoralizing blow there to end the half. It was frustrating and disappointing.”

NC State felt the absence of two of its leading scorers, as both Cunane and Crutchfield went a combined 0 for 9 from the field over the first 20 minutes. As a team, the Wolfpack shot 25% from the field and connected on just 1 of 12 tries from beyond the arc.

As the teams continued to trade buckets late into the third quarter and the Wolfpack struggled to string together stops on defense, freshman forward Jada Boyd stepped up big. The former five-star recruit drop-stepped into a spinning layup to cut the Louisville lead to seven, then after a stop on defense, Boyd flashed the same move, sank the layup and drew a foul. She converted the and-1, and NC State was within four points for the first time since halfway through the first quarter.

Later, with the Wolfpack trailing by just three points after a Cunane 3-pointer to kick off the fourth quarter, freshman wing Jakia Brown-Turner drew a shooting foul and went to the line for two free throws.

Brown-Turner clanked the first free throw off the back of the rim. She missed the second one too, but Boyd swooped in for a big offensive rebound and a chance to tie the game up with one shot. However, she stumbled under the basket and gave the ball away. As Louisville raced down the court in transition, guard Yacine Diop stepped into a 3-pointer and drained it, cementing a five-point swing.

Louisville rode that momentum to a 10-point lead at the media timeout and never looked back from there, keeping the Wolfpack at arm’s length the rest of the way.

“They just made tough shots at the end,” said junior forward Kayla Jones. “We had a couple defensive breakdowns, and that kind of changed the momentum, because I think it was like, three minutes left, and they were up by 10 again.”

Jones paced NC State with 17 points on 8-for-14 shooting, and Boyd’s 10 points rounded out the Wolfpack’s double-digit scorers. Konig finished with just four points and missed all six of her 3-point attempts. In stark contrast to NC State’s typical spread-the-wealth offense, the Wolfpack recorded assists on just six of its 21 made buckets.

With the loss, the Wolfpack is tied for first place in the ACC with Louisville, but with the Cardinals holding the head-to-head tiebreaker, NC State will need Louisville to lose again if it wants to be the No. 1 seed in the ACC Tournament.

The Wolfpack will be back in action on Sunday when it takes on Georgia Tech inside Reynolds Coliseum. The game tips off at 2 p.m. and will be broadcast live on the ACC Network.