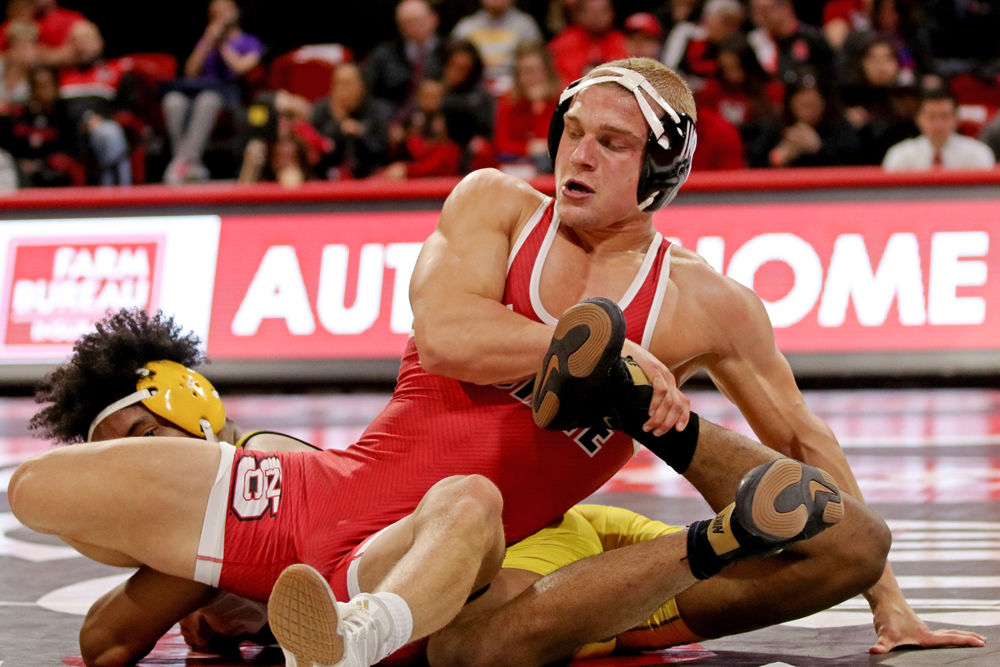 Redshirt sophomore Hayden Hidlay holds down Appalachian State’s Angel Najar at Reynolds Coliseum on Tuesday, Dec. 4. Hidlay won the final match before the break with a score of 10-2. The Wolfpack won against Appalachian State 29-9. 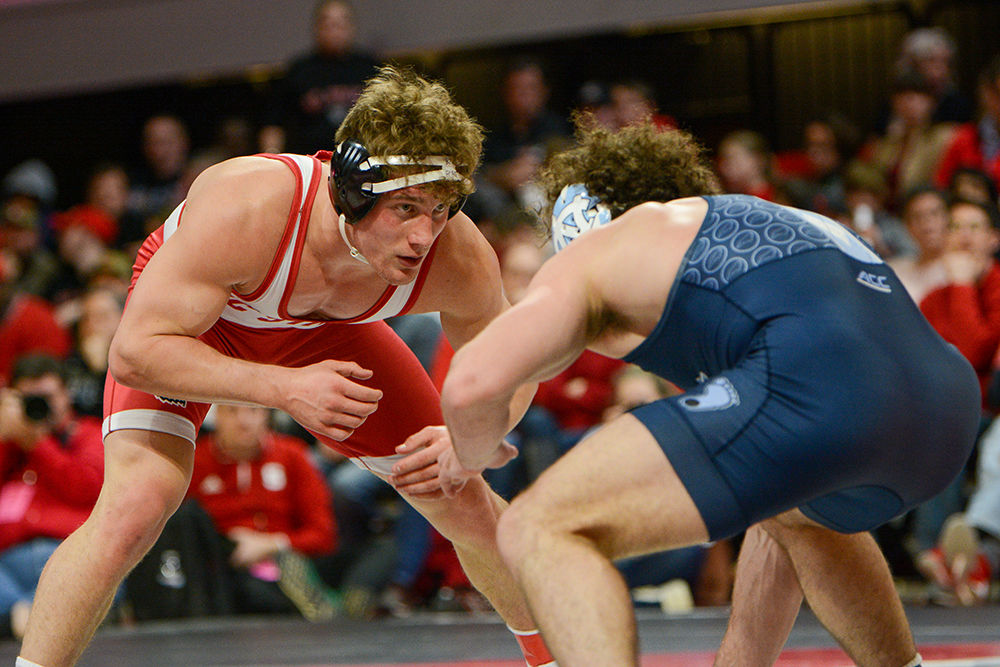 Trent Hidlay, a Redshirt freshman wrestling at 184 pounds, stares down his opponent in the match against the UNC Tar Heels on Saturday, Feb. 7, 2020. Hidlay won a bronze medal at the Junior World Championships in Estonia in August of 2019.

Redshirt sophomore Hayden Hidlay holds down Appalachian State’s Angel Najar at Reynolds Coliseum on Tuesday, Dec. 4. Hidlay won the final match before the break with a score of 10-2. The Wolfpack won against Appalachian State 29-9.

Trent Hidlay, a Redshirt freshman wrestling at 184 pounds, stares down his opponent in the match against the UNC Tar Heels on Saturday, Feb. 7, 2020. Hidlay won a bronze medal at the Junior World Championships in Estonia in August of 2019.

There are two sides to every athlete. Those looking from the stands see the strength and speed, the struggles and success, and the stats and awards. As we watch them win time and time again, do you ever wonder, “How did they get here? What do we not see?”

This is the case for NC State wrestling brothers Hayden Hidlay, a redshirt junior, and Trent Hidlay, a redshirt freshman, who now stand as leaders of the Wolfpack and prominent figures of a program that has won back-to-back ACC championships and is one of the top teams in the country.

Their other side began years ago with training and preparation, but most importantly their love for the sport and love for each other. The side that no one else truly sees and very few people know about is the most important side that landed them where they are today.

Their story takes us up north to Lewistown, Pennsylvania, a small town of about 8,000 people located in the center of the state.

“I was six years old when I started this sport, and I kind of did it out of random pretty much,” Hayden Hidlay said. “I started the sport when I was walking to school and some of the older guys who would walk me there would convince me to go out and do it…My family up to that point was all basketball and football; my dad played college football at Franklin & Marshall, and he was really big into basketball and golf as well, but I didn’t quite fit into those sports.”

About a year after Hayden Hidlay started wrestling, his younger brother Trent Hidlay joined him in the sport. The competition and aggressiveness between them is certainly one of the top reasons both of them were able to become D-I wrestlers.

“Wrestling a lot of times is a family sport,” said NC State head coach Pat Popolizio. “If your older brother wrestles, you are usually forced into it, as you’re probably being attacked at home. It becomes a family dynamic, and that has been the case for many.”

At the college level, fans and opponents alike see how dominant the brothers are, but it hasn’t always been that way. In fact, Trent Hidlay saw a lot of success in baseball and football before taking a break from wrestling.

“I think, starting out, I was able to find a lot of success, and my younger brother necessarily wasn't able to,” Hayden Hidlay said. “I was in fifth or sixth grade when I really realized that, if I kept up my trajectory, I could do really well.”

From such a young age, Hayden Hidlay knew that if he put his heart into wrestling, his dream could become a reality. But his younger brother did not share his dream at that point, and they briefly went on different paths.

“I think that is kinda where we met a crossroads in our relationship,” Hayden Hidlay said. “I remember telling him that he doesn't have to do things exactly the way I do. He doesn’t have to follow what I do; he can make a journey for himself. I think he wanted to hear that because he had the whole idea that everybody was comparing him to me and that's a tough thing for a 12-, 13-year-old kid.”

Regardless of the sporting path that Trent took, he knew early on that he would always have the support of his older brother.

“I told him that he could do whatever he wants,” Hayden Hidlay said. “Work the way he wants, compete the way he wants to and let his personality show on the mat, and I think that's where we started taking leaps and bounds in our relationship, and he started to diverge from what I was doing while still being able to keep as best friends along the way. I think that's the biggest point in our relationship and his career, especially because he started finding a lot more joy in the sport.”

Through their competitive nature and years of dedication to a sport they loved, it seemed so small when compared to the importance of their relationship.

“That time period for me was pretty tough; I wasn’t really as good as he was,” Trent Hidlay said. “I was seeing what he was doing, and I obviously wanted to be that good, but at that point, I wasn't really willing to put in the work to get to that. After freshman year, I committed to just wrestling, and that's when I think I saw a lot of growth and a lot of success. During the spring and summer, we were going to club practices, lifting and spending a lot of time together, and I think our relationship really built from that.”

Growing up, the Mifflin County High School products were always close and spent almost all their time together. Being so close in age, they had many of the same friends and even shared the same room up until high school. But with a two-year difference between them, Hayden Hidlay was destined to leave for college, leaving his brother and his best friend at home, 450 miles away, to continue his wrestling career in Raleigh.

“Holy smokes, the person I spend all my days with isn’t here anymore,” Hayden Hidlay said. “This got me more homesick than anything else.”

Hayden Hidlay was recruited by the NC State Wolfpack and arrived on campus in 2016 with all the high school accolades you’d expect, including a state title in his 40-1 senior year and a 149-15 career record.

“Our former assistant coach Frank Beasley had a great connection with their family,” Popolizio said. “His wife was from their same town. We built a great relationship, but I think it came down to the mentality for Hayden. I think that's where things started falling into place in the recruiting process. The biggest thing for him was that he wanted to be a guy that created history, not follow history.”

And create history he did. Hayden Hidlay ranks among the top wrestlers in the nation, winning a conference title in the 2017-18 school year. But things were not the same without his brother. So when it came Trent Hidlay’s time to commit, his older brother definitely had an opinion.

“During his recruiting process, it was a really stressful moment for me,” Hayden Hidlay said. “He had all these schools after him, but I really wanted him to come here. He would know if I was making a sales pitch to him and he didn’t want that, so I had to let him decide for himself.”

After being put into contact with some NC State wrestlers as well as some strong recruiting from coaches, Trent Hidlay committed to the Pack and the two brothers were reunited in 2018. Trent Hidlay has similar honors to his older brother except he won two state titles, posted a 154-14 career record and won his last 81 high school matches without giving up a single takedown.

“They compliment each other very well,” Popolizio said. “Hayden, he's all business. He has a great personality, but it's hard when you are so committed. Other people around him don’t understand him, but Trent balances it out for him. Trent can diffuse that stress in a good way.”

While these brothers are so close, they are very different. Go to any wrestling match and watch the differences for yourself. When Hayden Hidlay wrestles, Trent Hidlay is cheering him on along the sidelines, hyping up the crowd. On the other hand, while Trent Hidlay is wrestling, his brother is on the sidelines pacing back and forth.

“What I’ve learned to do is just stand on the sidelines and cross my arms,” Hayden Hidlay said. “I just try to sit back and hope that the match is going faster than you think it is going. Everytime he goes out there, I'm thinking to myself, ‘Alright, he should win this match,’ just because I feel like he’s prepared more than everybody else. He’s more talented than everybody else, so that kind of stress really builds in a match, and I just really want to see him succeed, more so than myself sometimes.”

“People always notice me on the sidelines,” Trent Hidlay said. “I’m always flipping out; I’m always yelling. I definitely freak out a lot more over his matches than I do mine. I know how hard he works and I know how bad he wants it. As a brother and as a teammate, you want him to accomplish his goals and you’ll do anything to help, so me freaking out on the sidelines may be that extra help for him.”

While they have been strong forces in each other’s success, you have to give them each their own credit for their impressive accomplishments, especially in an individually focused sport like wrestling.

“The push helps, but I think we have been able to realize our individual success is not dependent on each other. I think it comes back from the talk we had in junior high. We don’t have to be conjoined at the hip, and without me, he would be just fine,” Hayden Hidlay said.

With a big difference in weight class between the two, Hayden Hidlay at 157 and Trent Hidlay in 184, they don’t find themselves wrestling each other anymore, but they satisfy their competitive nature in other ways.

“I’m a lot bigger than him, so we don’t wrestle. But if we are playing dodgeball, it’s definitely going to get competitive,” Trent Hidlay said.

You can often find them going back and forth on Twitter, debating who has more Heart of the Pack awards. But at the end of the day, they will always be each other’s biggest fans and biggest inspirations.

“If I am doing what he is doing, then I know I'm doing something right,” Trent Hidlay said.

With all their accomplishments and success, Hayden and Trent Hidlay will prepare for another season of wrestling for the Wolfpack, their last season together in Raleigh, as Hayden Hidlay will be entering the year as a redshirt senior. As they continue to train, fans should mark their calendar for the next wrestling season to watch this duo help drive the Pack to success. While there, maybe catch a glimpse of Hayden Hidlay pacing back and forth, or perhaps Trent Hidlay breaking a chair in excitement for his brother’s win.

“I get the feeling that 15-20 years down the road, when I look back at this whole college experience, being able to do it with him has been the greatest highlight,” Hayden Hidlay said.