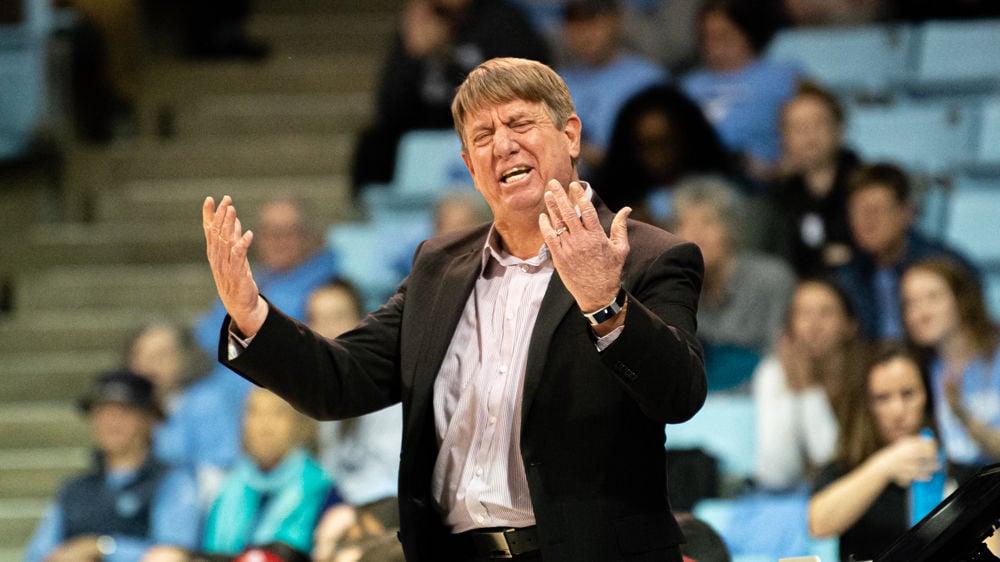 Head coach Wes Moore reacts to a referee’s call during the first half at UNC-Chapel Hill on Thursday, Jan. 9 in Carmichael Arena. The Wolfpack suffered their first loss of the season 66-60. 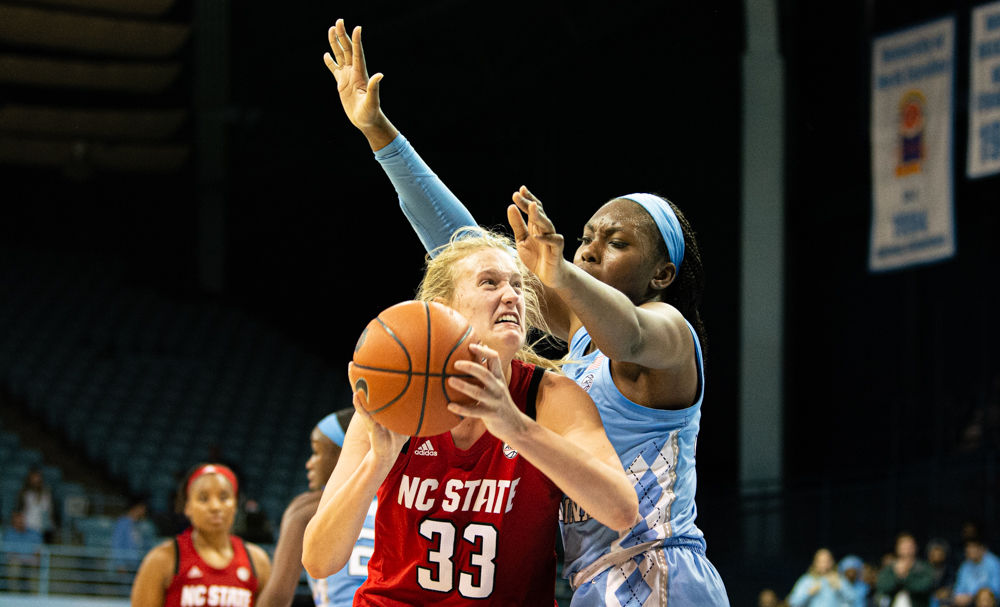 Head coach Wes Moore reacts to a referee’s call during the first half at UNC-Chapel Hill on Thursday, Jan. 9 in Carmichael Arena. The Wolfpack suffered their first loss of the season 66-60.

CHAPEL HILL — For the second year in a row, the No. 9 NC State women’s basketball team saw its unbeaten streak come to an end at the hands of rival North Carolina, losing 66-60 at Carmichael Arena Thursday night.

A horrid second-half performance doomed the Wolfpack (14-1, 3-1 ACC) in a game that it looked like it was going to run away with before the Tar Heels (12-3, 3-1 ACC) tightened up on defense and connected on key shots down the stretch.

“We have to attack the basket some; we just stood out there too much,” said head coach Wes Moore. “We probably got lulled into a sense of security. There in the first half, we shot the 3 pretty well, so maybe we thought we were going to do that all night.”

Despite taking a 10-point lead into halftime, the Pack was unable to stop the Tar Heels’ momentum, getting outscored 38-22 in the second half. Senior guard Aislinn Konig came up huge with 24 points, but despite sophomore center Elissa Cunane’s eight points and 13 rebounds, UNC kept her in check most of the night.

“I was very frustrated, because we were coming down and shooting quick 3s,” Moore said. “I kept screaming, ‘We want to get some post touches’ and that sort of thing, but on the other side of the coin, Bailey did a really good job on Elissa, bodying her up, being physical with her, and that gave her some trouble tonight.”

As soon as NC State won the tip to start the game, it was a first-quarter track meet, and Konig was leading the race with 10 first-quarter points. Junior forward Kayla Jones also made a huge impact with eight points, while Cunane led the team with five rebounds.

The Pack was up 23-17 after one quarter, and both teams were scoring at an impressively high pace which they were unable to sustain in the second quarter. There were only 26 total points in the second session, just a couple points more than NC State scored by itself in the first 10 minutes. Freshman wing Jakia Brown-Turner ran the length of the court and dropped in a layup as time expired in the first half, and NC State entered the break with a 38-28 lead.

It was a fairly balanced attack from North Carolina, which had four different players with at least five points at the half. Despite being a team strength this season, the two teams were tied at the half with 17 rebounds each, and Cunane had just two points and six boards. By the end of the game, NC State was outrebounded 40-32.

After a 3-pointer from junior guard Kai Crutchfield to open the second half and give the Pack a 41-28 lead, North Carolina dominated the third quarter, outscoring the Wolfpack 18-5 to tie the game with just 10 minutes left. NC State shot 18.8% from the floor in the abysmal quarter three, while UNC was at 45%.

“Runs are a part of basketball, and you know that teams are going to go on runs,” Konig said. “It just so happened that we weren’t able to connect on any of our shots, and it’s difficult to maintain that level of intensity that’s happening, so we just need to find a way, when we aren’t making shots, to create energy on the floor.”

NC State was struggling to get everyone as involved as they have been in just about every game this season. By the end of the third quarter, only Konig, Jones and Brown-Turner had scored more than three points, with 16, 10 and 12, respectively.

The momentum for North Carolina continued into the fourth quarter, making two free throws to take the lead at the 8:14 mark and building it up to as many as seven with just over four minutes left in the game. At that point in the game, NC State’s second-half shooting had dropped to 14.3%.

Then, a clutch Konig 3-pointer and an offensive rebound and putback for Cunane brought the game back within two points. After trading buckets, UNC took a four-point lead under a minute to go, and then free throws made it a six-point lead under 30 seconds. Yet again, Konig hit a huge 3-pointer to make it 63-60.

With 21 seconds left, NC State fouled and UNC made 1 of 2 from the free-throw line to make it a four-point lead. After a Pack timeout, Cunane attempted a deep 3 after a loose ball and came up short, as did the team, falling by a final of 66-60.

Cunane came up just two points short of another double-double, so only three players finished with double-digit points. In fact, only six of the Pack’s eight players that found playing time put points on the board.

NC State is still very much alive in ACC play and will need to get back on track in South Bend, Indiana on Sunday, Jan. 12 at 4 p.m. against a rebuilding Notre Dame team.

By the numbers: Women’s basketball vs. North Carolina

CHAPEL HILL — The No. 9 NC State women’s basketball team lost its first game of the season Thursday night, falling on the road to North Carolina. For the second season in a row, the Wolfpack’s unbeaten streak ended at the hands of the Tar Heels. Here are some key numbers from the game.

Plenty of basketball still ahead for Wolfpack after first loss

CHAPEL HILL — It was bound to happen. There was little doubt the No. 9 NC State women’s basketball team would lose at least one game this season, and on Thursday night on the road in Chapel Hill, it happened, as the Wolfpack (14-1, 3-1 ACC) suffered its first loss of the season to North Carolina 66-60.