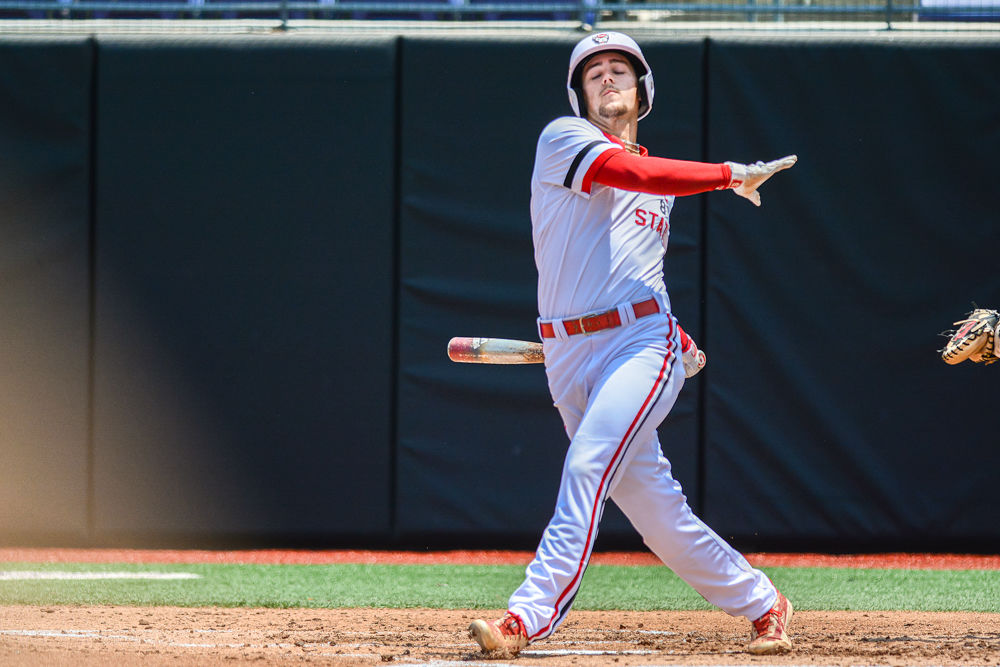 Junior infielder Will Wilson strikes out against Campbell on Friday, May 31, 2019 at Clark-LeClair Stadium in Greenville. Wilson went 0-4 with four strikeouts in the Wolfpack's 5-4 loss. 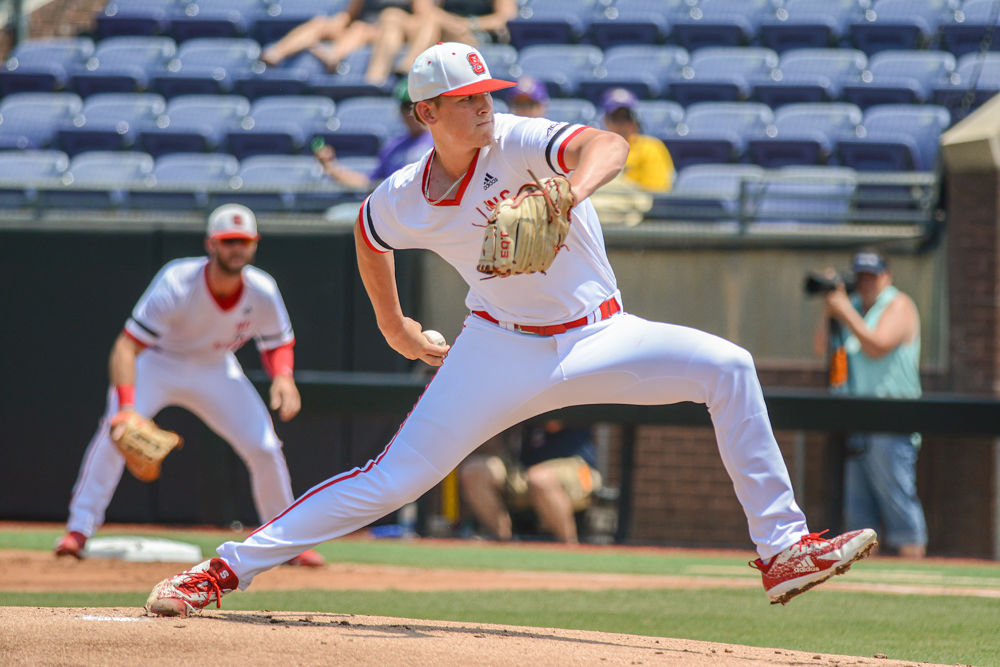 Sophomore pitcher Reid Johnston delivers the ball against Campbell on Friday, May 31 at Clark-LeClair Stadium in Greenville. Johnston pitched four innings, striking out one while giving up five unearned runs on four hits and three walks. The Wolfpack lost 5-4.

Junior infielder Will Wilson strikes out against Campbell on Friday, May 31, 2019 at Clark-LeClair Stadium in Greenville. Wilson went 0-4 with four strikeouts in the Wolfpack's 5-4 loss.

Sophomore pitcher Reid Johnston delivers the ball against Campbell on Friday, May 31 at Clark-LeClair Stadium in Greenville. Johnston pitched four innings, striking out one while giving up five unearned runs on four hits and three walks. The Wolfpack lost 5-4.

GREENVILLE, NC -- The NC State baseball team started its opening game of the NCAA Greenville Regional at Clark-LeClair Stadium against Campbell on the campus of East Carolina University on Friday afternoon. But the two teams will need Saturday to decide the contest with NC State trailing 5-4 in the last half inning.

The second-seeded Wolfpack (42-17) gave up four first-inning runs to the third-seeded Fighting Camels (35-19) and slowly climed back into the sloppy defensive game despite a dominant, seven-inning, 11-strikeout showing from Campbell’s starting pitcher Michael Horrell.

The two teams have combined for nine runs on nine hits and five errors with just three outs to go. The first eight runs of the game were unearned with the only earned run an eighth inning home run by sophomore outfielder Jonny Butler.

Campbell got the scoring going early, taking advantage of an error by junior shortstop Will Wilson and two seeing-eye singles through the infield to plate two early runs. Then, with two outs and a runner on third base, first baseman Koby Collins launched the first pitch he saw from sophomore right-hander Reid Johnston deep to left field for a two-run home run and a 4-0 lead.

The Wolfpack broke through in the bottom of the third inning, getting three runs back thanks to back-to-back errors by the Campbell infielders and some timely hitting. The latter error scored sophomore second baseman J.T. Jarrett, who led off the inning with a single.

A few batters later, sophomore catcher Patrick Bailey plated junior third baseman Dillon Cooper with a deep sacrifice fly to center field, cutting the deficit in half. Senior first baseman Evan Edwards then worked a full count before ripping an RBI single through the right side of the infield to make the score 4-3.

Campbell answered back the very next inning with a run of its own. After a one-out single by left fielder Matthew Barefoot and another error by Wilson, this time during a tag on a stolen base attempt that gave Barefoot an extra base, a sacrifice fly drove him home.

Both teams settled down the next few innings as sophomore lefty Nick Swiney came in and shut down Campbell’s offense. He went four innnings without allowing a hit or a run and struck out seven.

Then, a single by junior designated hitter Brad Debo to lead off the seventh put NC State in prime position to strike back. Head coach Elliott Avent chose to go with pinch hitters to replace the seven, eight and nine hitters, but sophomore outfielder Terrell Tatum, junior outfielder Lawson McArthur and freshman infielder Luca Tresh all struck out in order to quickly halt any potential rally.

After his back-to-back-to-back strikeouts to end the seventh inning, Campbell senior right-hander Michael Horrell walked off the field with 114 pitches on the day and a career-high 11 strikeouts to a standing ovation from the Campbell faithful who assumed his day was over.

But Horrell trotted out for the eighth inning, and Butler immediately launched an 0-2 fastball over the right-field fence to cut the deficit to 5-4.

Just seconds after Butler’s home run, lightning in the area forced the game into a weather delay. Horrell would not return after the storm passed, going 7-plus innings and giving up four runs (one earned) on five hits and 118 pitches. The delay may have killed the Pack’s momentum, however, as Wilson and Bailey struck out when play resumed nearly an hour and 20 minutes later.

It just wasn’t Wilson’s day as he collected his fourth strikeout of the game and committed three errors, although one was on a colision after a stolen base attempt and another was on a tough chopper to shortstop. The potential first-round pick in the MLB draft will certainly get his chance to bounce back on Saturday and Sunday.

Edwards was hit by a pitch and stole second in the eighth after the two strikeouts but freshman outfielder Tyler McDonough was unable to knock him in, sending the game to the ninth inning with the score 5-4 in favor of the Fighting Camels.

In the top of the frame, redshirt freshman Cameron Cotter came in but allowed a one-out walk and was replaced by sophomore Evan Justice, who got the next batter to ground into a 6-4-3 double play.

The Pack was down to its last chance at the plate but immeadiatly following the double play more weather came through Greenville, forcing the umpires to stop the game once again. This time play would not resume, setting up the ninth inning to be completed on Saturday at noon.

Debo, Tatum and McArthur are due up in the ninth inning where the Pack will need to score at least one run to continue playing and avoid dropping to an early elimination game.