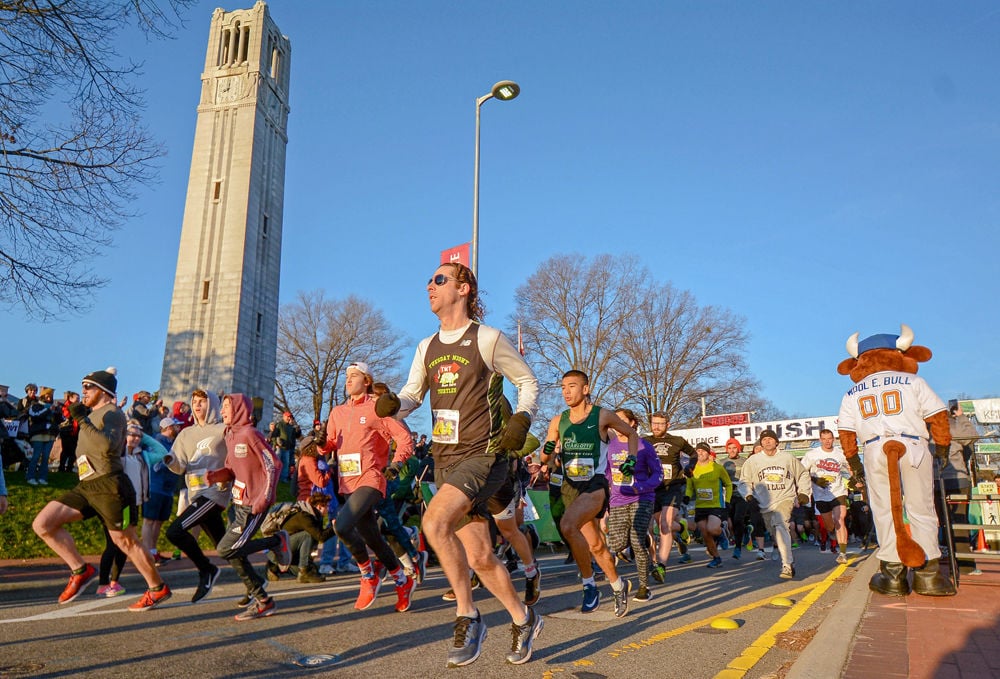 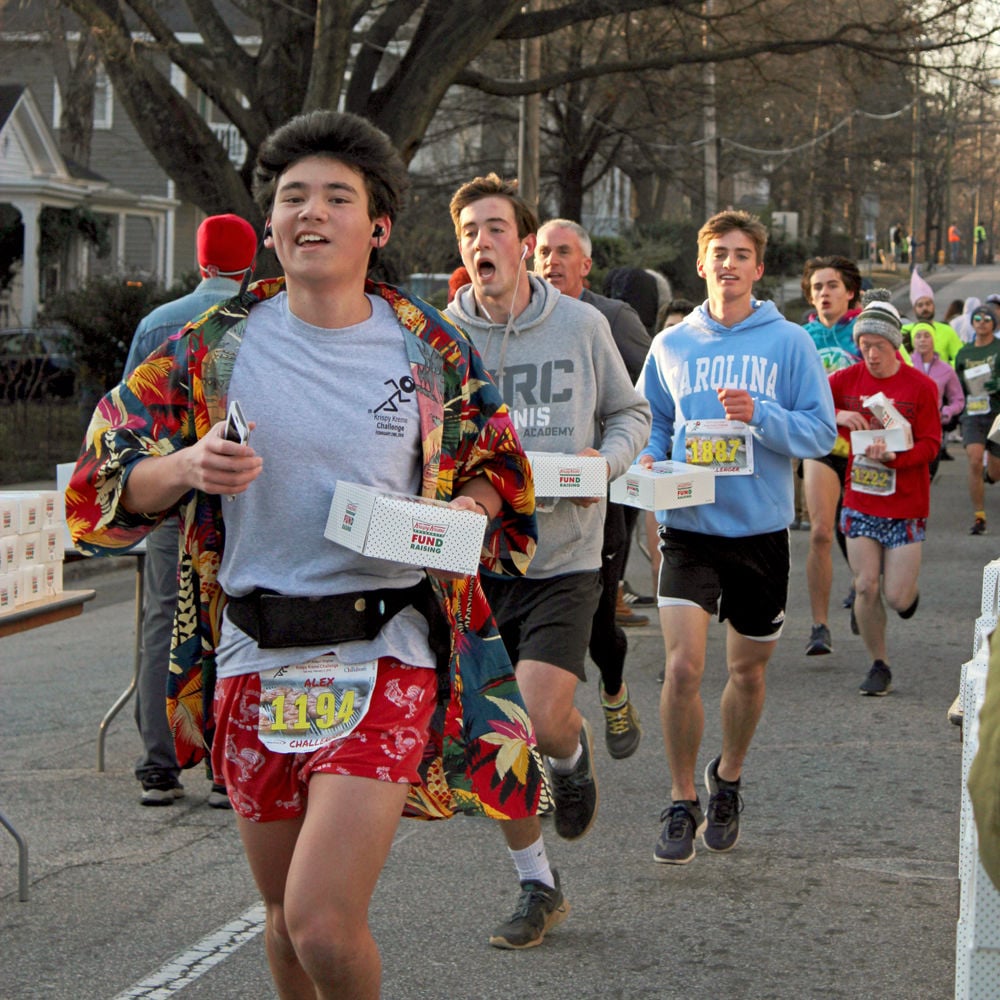 Krispy Kreme Challenge participant Alex Ahn, a 16-year old from Raleigh, races towards Krispy Kreme in Raleigh with a dozen donuts in hand on Saturday, Feb. 2.

Krispy Kreme Challenge participant Alex Ahn, a 16-year old from Raleigh, races towards Krispy Kreme in Raleigh with a dozen donuts in hand on Saturday, Feb. 2.

Every year, NC State students and the Raleigh community gather for the Krispy Kreme Challenge. On the morning of Feb. 2, participants braved the cold winter winds to raise money for the UNC Children’s Hospital. The race consists of eating 12 doughnut and running five miles from the Belltower to Peace Street, all in one hour.

The event marks the 15th anniversary of the Krispy Kreme Challenge. The challenge was unofficially started as a dare in December 2004 by a group of 11 Park Scholars. The following year, after receiving some media attention, the organizers decided to make the challenge an official event and charged $10 to run. They ended up with over $1,000 in profit, which the students decided to donate to the UNC Children’s Hospital. By 2007, the race had tripled its participants and brought in more than $10,000. Now 15 years later, the Krispy Kreme Challenge has become an iconic Raleigh tradition.

This year a total of $190,000 was donated to UNC Children’s Hospital, which was what the organizers of the event anticipated the donation to amount to. According to the race directors, this year’s donation brings its 15-year cumulative donation to over $1.7 million, making it the fourth installment of the organization’s pledge to donate another million to the hospital by 2020.

“Most of our money comes from registration revenue,” Warren said. “Obviously that’s the vast majority, but we make money off merchandise sales, we do general fundraising that people can do through race entry, people can donate off our website or fundraising teams is a big thing. There’s also sponsorships which come from companies, mostly from the Raleigh area and some national companies, so that also makes up a large portion of it.”

Mark Mahoney, a participant in the race, came with his group F3, which stands for Fitness, Fellowship and Faith. The group began to participate in the event in 2012 and has come to every race since. This year, they had about 75 participants from the group.

“You can’t do enough for charitable causes,” Mahoney said. “If you’re not doing something for something, then you really need to look into it. Children’s charities are close to me; Make-A-Wish, UNC Children’s Hospital is all really important stuff, and I think it's great that we do this for a cause.”

About 5,500 students, parents and community members alike seem to share the same affinity for the unique race. The parameters of the challenge have allowed it to earn a fanbase over the years. Some make it into a fun, creative annual tradition, like Abby Cox, a fourth-year studying animal science.

“I think it does a really great thing for UNC Children’s [Hospital], and I like to support it and also dress up,” Cox said. “First year we [friend group] did it, we were Star Wars, then we were Pac-Man and last year I directed the Krispy Kreme Challenge, so this year we decided to be Scooby-Doo gang, because it’s a good group costume. [Our favorite part is] seeing the costumes and being in such a cool community that comes together for something awesome.”

In addition to raising money for a good cause, the race is also a chance for the people of Raleigh to come together as a community and have fun.

“All of the people I have been talking to said that is a chance you can’t miss,” Wattengaard said. “This is something you really have to do when you’re in Raleigh, so that’s probably the biggest reason. I looked it up watched on the internet and just checked it out, and it just looked really cool.”

As part of the tradition, the Krispy Kreme Challenge features a costume contest. The competitors sport their most outrageous and creative outfits in an attempt to win.

Jackson Summers, a senior in high school who plans on studying industrial engineering at NC State, was the year’s costume contest winner and top fundraiser.

It may seem unconventional that combining eating doughnuts and running in the cold could strengthen a community. However, for the past 15 years, the Krispy Kreme Challenge has continued to be an important tradition to NC State and the community it serves.

“I like the camaraderie,” Moore said. “Just that so many people show up… You have hundreds of people that come on a cold February morning to run and make themselves sick with doughnuts.”