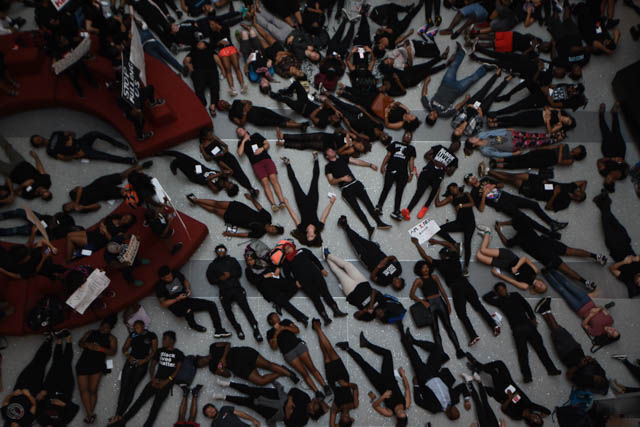 NC State students fill the Talley Student Union atrium on Sept. 23 for a die-in as a form of nonviolent protesting. Students laid down and filled the floor to represent those who have been unfairly murdered. 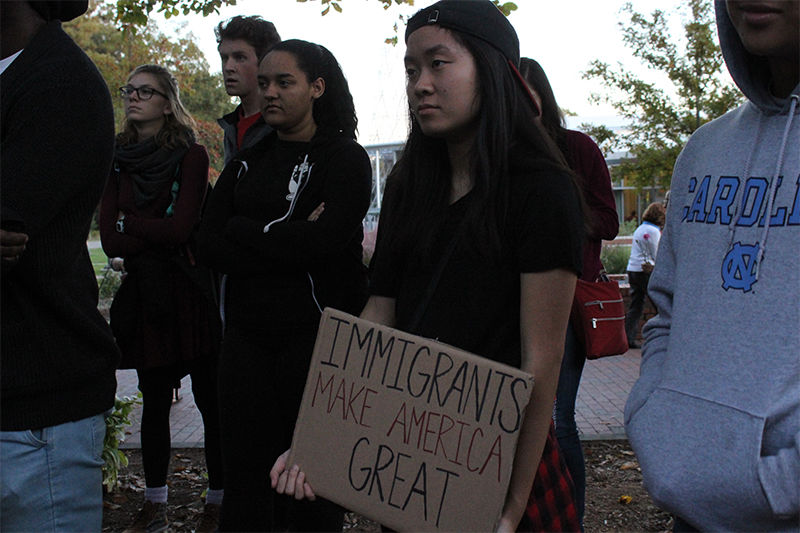 Jasmine Wang, a junior studying engineering, displays protest sign during a Demonstration of Post-Election Solidarity. The rally served as an outlet for those who were upset by the results of the presidential election. The demonstration took place in Wolf Plaza on Friday.

NC State students fill the Talley Student Union atrium on Sept. 23 for a die-in as a form of nonviolent protesting. Students laid down and filled the floor to represent those who have been unfairly murdered.

Jasmine Wang, a junior studying engineering, displays protest sign during a Demonstration of Post-Election Solidarity. The rally served as an outlet for those who were upset by the results of the presidential election. The demonstration took place in Wolf Plaza on Friday.

Student advocacy at NC State is lacking in the eyes of many student activists, and they want to see a change. Leaders of many student organizations on campus have observed a lack of involvement and have shared their ideas on why the student body doesn’t seem to agitate for cultural and political change, as well as what students can do to stand up for their cause.

Political organizer Achaia Dent, a sophomore studying animal science, says that there is not enough support on campus for activist movements.

Diversity Education for Our Peers to Thrive’s (DEPTH) Peer Educator Amani Manning, a senior studying political science, said that too many political events on campus are reactionary. He talked about the die-in that took place in Talley Student Union last September, which was a reaction to the death of Keith Lamont Scott, who police shot in Charlotte. He suggests that numbness toward issues like police killing black men is the reason such events are rare.

“Events like that need something tragic to happen to trigger it,” Manning said. “We all know people die every day, but it’s become so normalized that it’s not triggering anymore, and that’s really f------ sad.”

Co-officer of Students Advocating for Gender Equality Leah Block, a sophomore studying communication, said that NC State lacks a specific type of activism that is prevalent at other universities.

“There is a lack of radical, confrontational activism that is like, ‘these are our demands, this is what we want,’” Block said. “We see more of that kind of direct action at places like UNC, or App State or HBCUs in the state that are known for their direct actions.”

Block says that part of the reason more visible activism at NC State is uncommon is that it is frowned upon by students, no matter their political persuasion.

“Direct action on this campus is one of those things that is shown in a negative light,” Block said. “NC State stays very tame with its demonstrations because that’s what everyone can agree on.”

Manning agrees that the culture of NC State is not very friendly toward activist sentiments.

“I wouldn’t say this is the most activist-friendly of places,” Manning said. “And also, there’s a large population that just doesn’t want to hear it.”

Lauren Frey, treasurer for The Movement (an organization within the Women’s Center) and a senior studying environmental science, points out that NC State is not best known for its CHASS department, despite the great work it does, and believes this is relevant to the lack of activism.

She said that, despite activism being relevant in all disciplines, CHASS disciplines lend themselves more to nurturing activist attitudes.

“The people at this university who study humanities and social science are people who, because of that kind of academic thought, are more likely to realize that they have agency and can make a change,” Frey said. “Part of the lack of an activist culture at NC State is that we’re really heavy in STEM and CALS and these other colleges that aren’t necessarily as inclined to naturally be activist.”

Manning echoed these sentiments, and extends blame to the administration of the university for the lack of activism on campus.

“Our administration kind of makes it challenging,” Manning said. “We’re not a liberal arts school, by definition, so there are certain barriers and hurdles.”

Block agreed and said that the administration is slow to respond to certain events, such as the shooting of Scott that incited the die-in.

“I think the administration responds way too slowly to events that can have real psychological impacts on students,” Block said.

Shabnam said that this slow response is to be expected, speculating that the slowness of the administration’s responses comes from a desire to be organized.

“I think responding quickly is obviously important because that’s when people want a response,” Shabnam said. “But at the same time, being reactionary is not the way to go about it because it leads to disorganization.”

Manning said the NC State Board of Trustees is partially to blame for the lack of an activist culture at NC State. He pointed to its influence over the chancellor as part of the reason the NC State administration doesn’t react as supportively of student activists as Manning would like.

“The Board of Trustees is where the power is,” Manning said. “I’m sure [the chancellor] wants to help, but what does his boss say?”

“That’s something I would strive to be, but I don’t know if I could say that I’m a student activist,” Shabnam said. “I think that’s something we should all work toward.”

Frey appeals not to a need just for activism at NC State, but for a change in mindset.

“It would be great if people were more engaged in their communities,” Frey said. “And if people viewed the world as something that is not inevitable, but rather very much influenced by social forces.”

As to how students can become more active, Block, Frey, Manning and Moneeb Sayed, education chair for the Muslim Student Association, all agree that joining student organizations is one way to start being politically active.

“I think getting involved with most student organizations is a great first step because … getting involved in communities that care about something is a good first step for being able to figure out a person’s specific role in some type of change-making,” Frey said.

According to Sayed, there’s a certain power in organizing as a group.

“Together, we can make a difference because if it’s just one person, you might not be heard, but when you’re together, you can go a very long way,” Sayed said.

Shabnam, Block, Frey and Manning all agree that keeping up with the news is also important as one begins making change.

“Staying up to date on current events and what’s going on at one’s own university or in their own community or in their own state or country, I think that’s also really important,” Frey said. “Being informed and educated about whatever is the current status is important to being able to change it.”

Shabnam talked about the importance of thinking about who is closest to oneself and advocates for talking to people who are very different from oneself.

“Start a conversation with someone who is nothing like you,” Shabnam said. “You might have a greater perspective of the broader community and the broader world and you might be more open-minded to being more inclusive of others [if] you are surrounded by people who are different from you.”

According to Block, activism “exists on a spectrum.” It involves more than just organizing rallies and protests and extends into different spheres.

Block said that activism extends even into people’s day-to-day actions.

In a poem she wrote in January 2015, Shabnam expressed her desire for people to stand up for what they believe in, and not to get caught up in searching for meaning and hope where they will not find it. The closing lines of the poem read as follows:

“Fight for knowledge and justice / Fight for tranquility and justness / Fight for friendship and freedom / Fight your inner demon / Fight for your purpose / Don’t do yourself a disservice.”

This is the first story in a series about student activism at NC State.