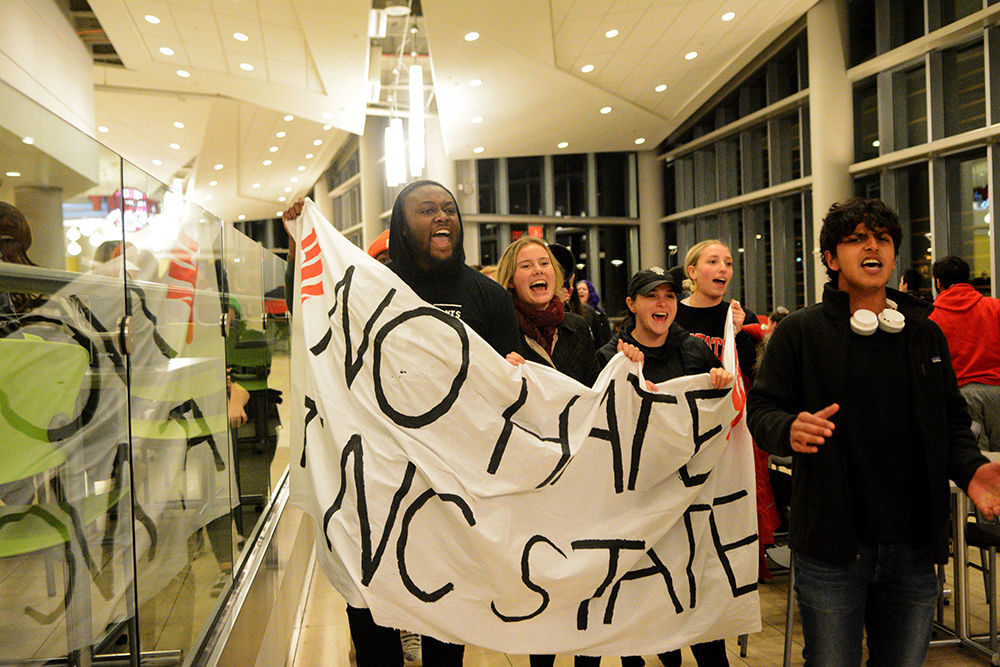 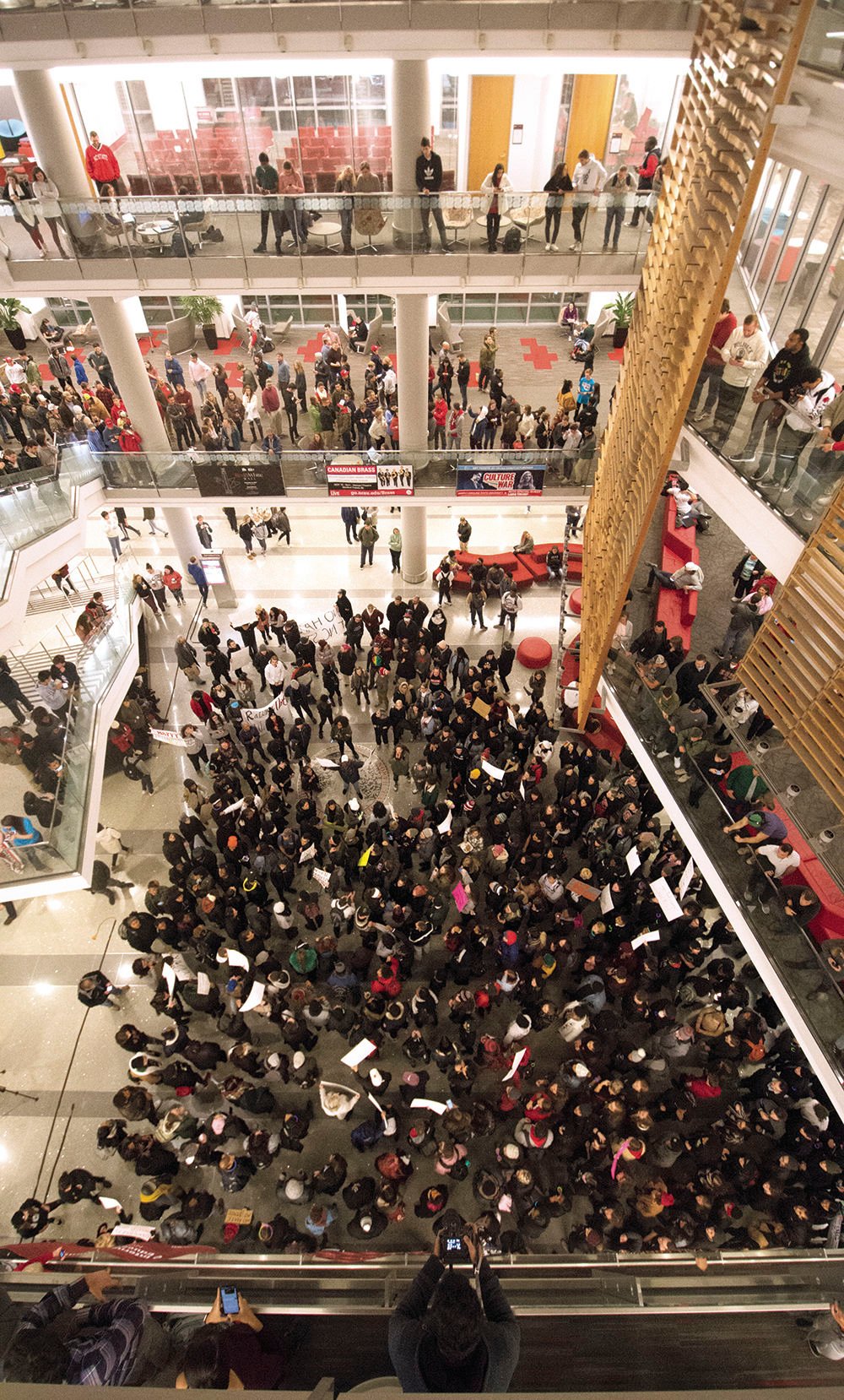 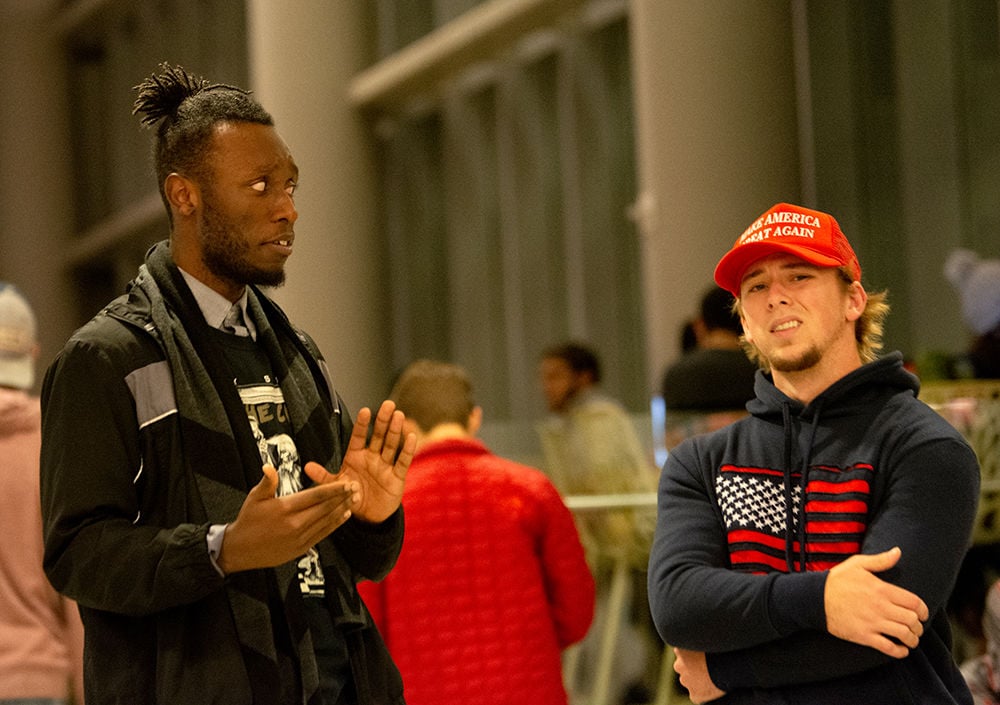 James Daniels (left), a third-year studying middle grades language arts and social studies education, and Hayes Bradley (right), a first-year studying mechanical engineering, discuss politics at the protest of the Turning Point USA event in Talley Student Union on Wednesday, Nov. 13, 2019. Both Daniels and Bradley said the conversation was civil and that they respected each other’s differences.

James Daniels (left), a third-year studying middle grades language arts and social studies education, and Hayes Bradley (right), a first-year studying mechanical engineering, discuss politics at the protest of the Turning Point USA event in Talley Student Union on Wednesday, Nov. 13, 2019. Both Daniels and Bradley said the conversation was civil and that they respected each other’s differences.

On Nov. 13, over 1,000 students gathered to protest the NC State chapter Turning Point USA’s event, Culture War, featuring Charlie Kirk and Lara Trump as speakers. Organized by the No Hate at NC State coalition, which is made up of several activist organizations, students protested TPUSA’s ties to hate speech against minority groups.

The event began at 5:30 p.m. in Wolf Plaza with several speakers discussing the negative impacts of the speech spread by TPUSA on marginalized communities. It moved to the lobby of Talley Student Union, and protesters stayed until after the TPUSA event ended at 9:00 p.m. with chants that denounced conservative ideologies.

Tim Hogan, director of student centers, estimated that around 800 people turned out for the Culture War event and there were 1,000 protesters at the height of the demonstration.

Prior to the protest, Skye McCollum, a third-year studying political science and French and co-chair of activism for the Young Democratic Socialists of America, talked about the reason why groups made the decision to protest the event.

The event was a collective effort between many organizations that wanted to take a stand against the event and things the speakers have said. McCollum also said giving the speakers a platform legitimizes their ideologies, which can be damaging.

Micah Lowry, a fourth-year studying political science, discussed the importance of the event, saying it was important for people impacted by statements made by the speakers in order to assure them that they are supported.

“I think for this event, it’s really important that not necessarily we’re out against one thing, but the symbolism of indicating these are not the types of viewpoints that we support as a community,” Lowry said. “But also just for me individually, even if the statements don’t directly affect us or are being directed toward us, I think it’s really important that we show that for those that may be affected by the statements of the Trumps or Charlie Kirk that this is not something we believe in, something that we won’t tolerate, even though it may technically fall under the guise of free speech.”

Both Lowry and McCollum said the biggest thing they wanted to ensure was that the protest was non-confrontational, and that by being there, they can display to the public that students are unified against the event.

Kyasia Benjamin, the state representative for Turning Point USA, said the organization was simply present to exercise their rights.

“I have nothing against them doing any of this,” Benjamin said. “It’s their First Amendment right; I’m going to support that because that’s what this country was built on. We believe in free speech. We believe in the constitution. As long as they respect us and aren’t violent towards us, we should have no problems. We’re going to have a great event. We have two amazing speakers coming out tonight, and this does not faze me whatsoever.”

Michelle Burden, a second-year studying psychology, said while she understands that NC State strives to ensure all of their students are represented, the university should be cognizant of the groups that organizations speak against. She said in order to see change on campus, people must speak out against what they view as wrong to incite change.

Several people went inside the TPUSA Culture War event and walked out in protest, including Sami Gephart, a first-year studying math. She said the things said about the protesters and left-leaning individuals during the event were not entirely accurate.

“Everybody was disappointed, and also the whole time we were in there, they were watching us,” Gephart said. “I think that TPUSA made it sound that a demonstration was going to be violent and chaotic, and that's not at all what we wanted. We don't want to make them even more angry than they already are. They are just looking for it to be a riot, and it’s clearly not a riot. Everybody's just voicing their opinion.”

On Wednesday afternoon, Chancellor Randy Woodson issued a statement promoting a diverse and inclusive culture, emphasizing the university’s free speech policy and encouraging the student body to have discussions with an open mind.

Kathryn Barnes, a fourth-year studying industrial and systems engineering, said at this point in her time at NC State, she was not surprised at the university position on bringing the TPUSA event to campus.

“I’m a senior; we’ve seen all of these different types of events, especially circling around sexism and racism, starting with the GroupMe from Sullivan Hall, calling people the ‘N’ word, things like that, to something that happened literally last year,” Barnes said. “We’ve seen and expected the type of response that Chancellor Woodson gave, which was disappointing, but again, not surprising. I think with us being here, it just shows you how much we care about where we stand on these issues and how much we don’t stand for intolerance.”

No Hate at NC State Protest