You have permission to edit this article.
Edit
News
Sports
Arts & Entertainment
Opinion
Video
Galleries
Advertising
About
1 of 3 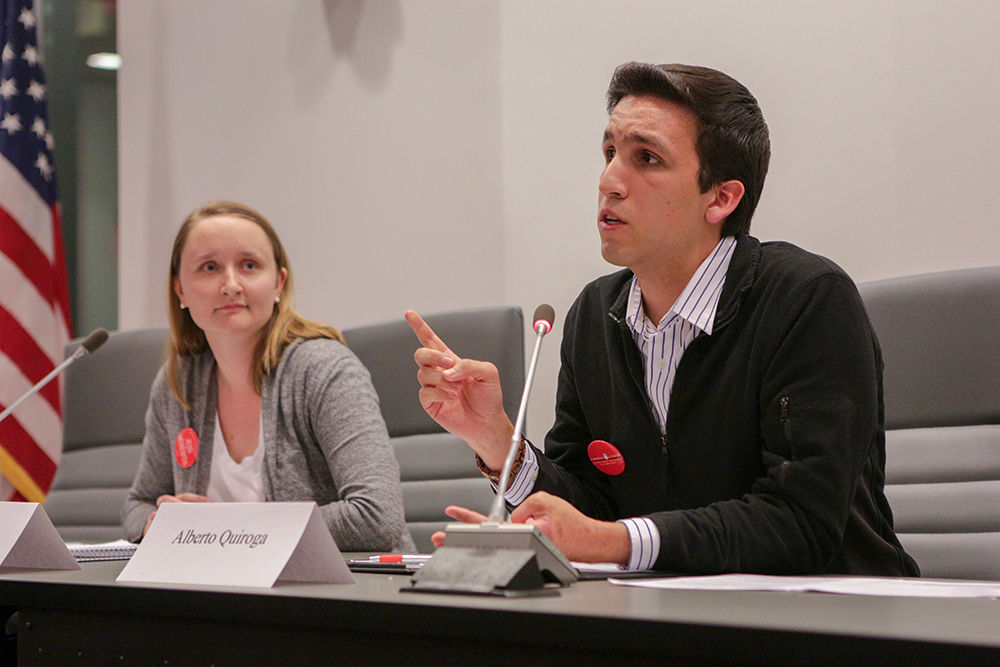 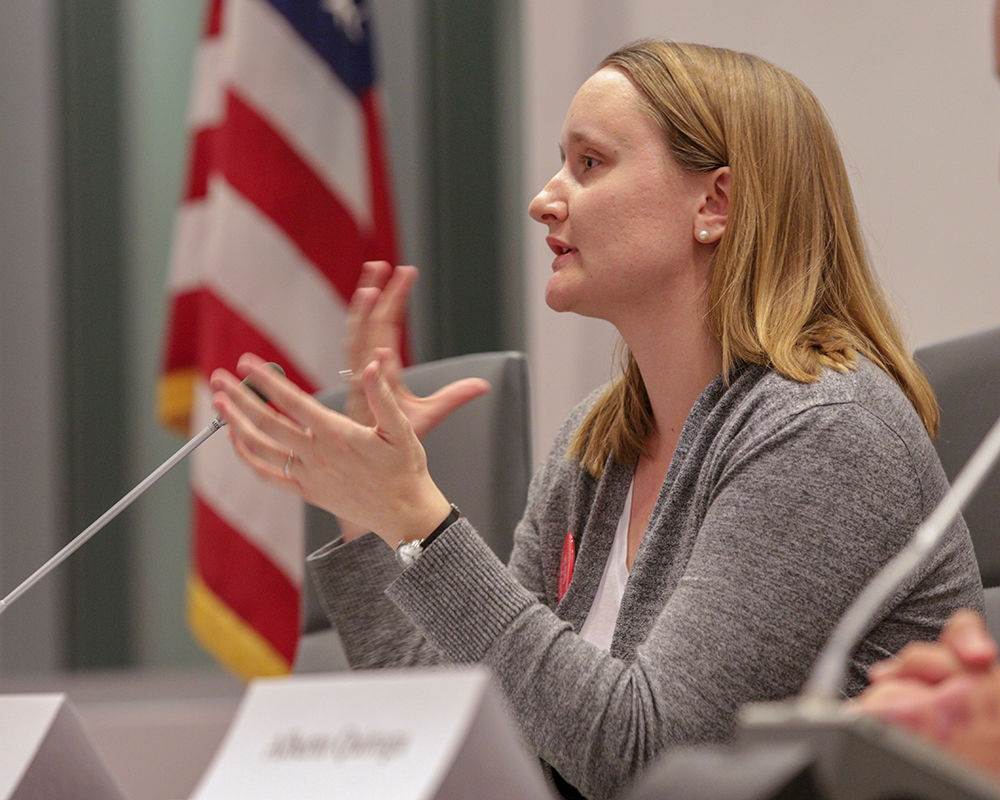 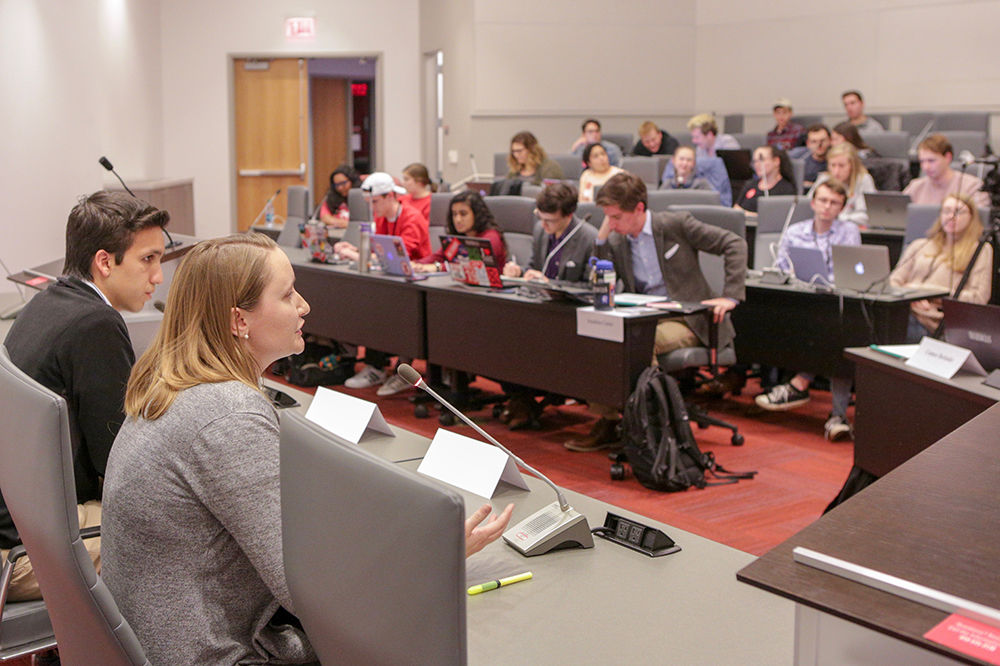 The debate kicked off with Bolinder asking about Errico and Spence Beaulieu’s ages and years in school relative to much of the student body. Errico responded by saying that her and her running mate’s years do not take away from their ability to advocate.

“I think that is important to remember that your student leaders are here to advocate for you even though they might not necessarily identify with every aspect of your identity,” Errico said.

On Tuesday night, after the runoff was announced, photos of Quiroga’s running mate Lewis were brought to attention by a post and comments on Wolfpack Students. This brought up controversy, especially surrounding Quiroga and Lewis’ platform of diversity and inclusion, and was called to attention during the debate.

“Those posts, even though my running mate was in a picture with a person who posted the Instagram picture, we don’t believe in what the other person and his political ideology,” Quiroga said. “That doesn’t mean that that represents what Zach’s character is like. ... Zach, he is my running mate, I am very proud of who he is. I will never call into question his character.”

When a question about tackling the issue of sexual assault on campus was posed to Errico, she responded by saying she would continue measures put forth by Student Government. Quiroga stressed the importance of proactive measures against sexual assault.

“We should be also more focused on the proactive part [of sexual assault], not the reactive part,” Quiroga said. “Making sure that we don’t get to the point where sexual assault is happening on our campus.”

During the debate, Quiroga continually went back to the idea of “pulling up a chair” with student groups, specifically graduate student initiatives, on campus, as well as having conversations with the community.

“You have to actually pull up a chair,” Errico responded.

Errico then went on to question the attainability of the opposing ticket’s platform especially in regards to graduate student needs.

When discussing shortcomings of current Student Body President Jackie Gonzalez, both candidates agreed that visibility was a quality they would emphasize more during their potential terms.

“I think that visibility is important,” Quiroga said. “It’s just being out there, and making sure students can see you. Whether that be with holding office hours downstairs in Talley or a different accessible location on campus … and advertising where we are going to be.”

Errico also chimed in on the idea of visibility within students organizations.

“I don’t think that it’s always going to happen where you can be at every meeting of every student group,” Errico said. “But you can certainly make an effort and be intentional about when a decision is being made and a conversation is being had about a certain demographic or a certain student group or anyone who would be a stakeholder.”

Davis posed the final question of the night regarding why each individual candidate is the best to represent the entire student body. Quiroga answered first, discussing his passion for changing NC State, embracing the love of the Pack and initiatives to connect the students.

Errico followed up with a question to Quiroga looking for concrete interactions and decisions made with student groups. Quiroga answered by providing examples such as his involvement with the Disability Services Office and the Graduate Student Association. Errico responded that she did not see these interactions in his platform and expressed her concern about remedying relationships with organizations on campus.

When the same question was asked to Errico, she responded that her running mate and herself are a team that covers each other’s weaknesses, works for reasonable goals that would have a large impact on NC State and advocacy of students.

“I think one of the big things is that Meredith and I are built to cover each other’s weaknesses,” Errico said. “If you look at our platform, the goals are attainable. They’re realistic, they can happen, and they are backed by the facts.”

In rebuttal, Quiroga referenced Errico’s and her running mate’s marital status and a broad platform as a possible concern for their commitment to the job.

“I would say that one thing we can’t overlook though is that [Errico and Spence Beaulieu] both are married students,” Quiroga said. “One’s a graduate student and one’s going into a fifth year, I’m saying does that represent what the student body is like and how can you make sure that those ideas are going into the student body?”

Errico responded to this claim, stating that she was insulted by the comments made about her marital status. Her response was followed by a round of applause and cheers from the audience.

“Our platform goals are attainable,” Errico said. “There are specific initiatives, we don’t go into those details in this conversation, but I certainly can. ... We have addressed the fact that our platform is specific. We have addressed that there are some difficult things on there and we included that disclaimer so we’re not making false promises. And I’m married, proud married woman, and that is not a defining quality on whether or not I am capable of doing a job.”

The debate wrapped up with closing remarks from both candidates and then from Carter as well, thanking everyone for their participation.

Voting for student body president and vice president will be open Thursday from 8 a.m. through 8 p.m.

Technician’s fact checkers did not find discrepancies or factually questionable statements made by either candidate.