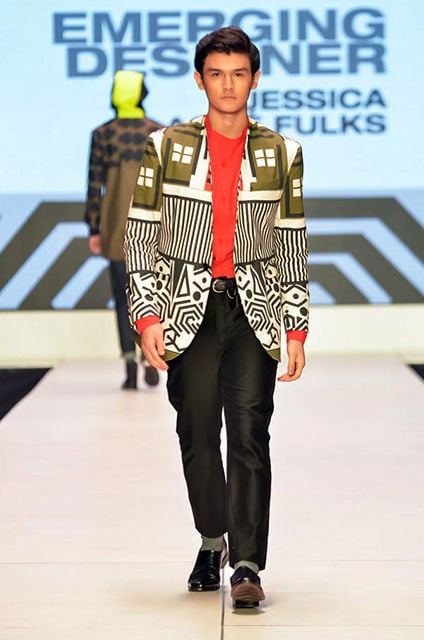 Jessica Fulks takes inspiration from vintage styles, often drawing from classic films. The tagline for her clothing line is “future of vintage”. 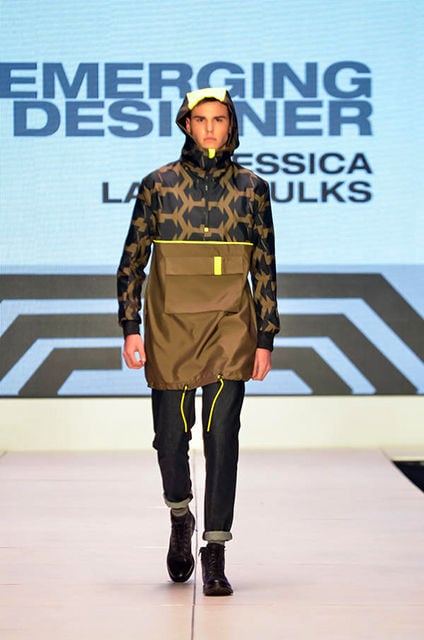 Jessica Fulks graduated from NC State with a degree in Textiles in 2009. For her current line, she says she drew inspiration from the 1982 film “Tron.”

Jessica Fulks takes inspiration from vintage styles, often drawing from classic films. The tagline for her clothing line is “future of vintage”.

Jessica Fulks graduated from NC State with a degree in Textiles in 2009. For her current line, she says she drew inspiration from the 1982 film “Tron.”

After a petrifying lab encounter with snakes, the then-Zoology student Jessica Fulks took the next bus to the College of Design. En route, a friend recommended that she look into degrees at the College of Textiles.

“I made a joke in the class and said no one would see me again,” Fulks said. “On the ride over [to the College of Design], my friend told me about textiles, and that same day I changed my major.”

“As soon as I switched my major, I started a clothing line,” Fulks said. “But at first, I didn’t know how to sew or anything, so I started off by painting T-shirts.”

Fulks talked with the Technician about what it took to prepare for fashion week, undertaking an unexpected teaching position and reinventing vintage.

Q: What was your Charleston Fashion Week experience like?

“Over 150 people applied and 16 [semifinalists] were chosen. It was a weeklong competition where four designers showed their collection each night. I showed on Thursday night and I won the Emerging Designer Competition’s People’s Choice for my night. I moved on to Saturday and got to show a full collection of 12 looks.”

Q: How did you prepare for it?

“We had fittings in the middle of January and we didn’t get to fit again until the week of the show. You got eight minutes per model. It was a competition, so everyone had to have the same amount of time. I started with my ideas in November with my sketches, but I didn’t start sewing until the first week of January. I was completely finished about two weeks before the show. After that, I started editing and making sure everything was perfect. I didn’t want have to sew whole garments after I already had the fitting.”

Q: What was the most difficult part of the preparation?

Q: Talk a little about your clothing line.

“After I finished at the Savannah College of Art and Design (SCAD) in Atlanta, I moved here [Charleston]. My clothing line goes wherever I go; I don’t have a brick and mortar. It started out as J. Fulks Original, but now it’s Laché Supply & Company, LLC. I went from doing women’s and men’s to just men’s, but it’s always had a vintage inspiration. I might choose a different inspiration every season. The season before this one I did it on Tibetan culture and American workwear. This season, I did it on ‘Tron,’ the 1982 film, not the Disney re-make."

Q: Where do you get your inspirations?

“My line is vintage-inspired, usually taken from a past reference, like an old movie. I don’t try to copy the clothes from that era; I use them strictly as a historical inspiration for my textile designs. I like taking vintage ideas and turning them into something new; that’s why my tagline for my clothing is “future of vintage.” But, if I have a ‘70s inspiration, for example, I don’t look at clothing from that time. I look at how people acted, what they liked to do or use and music and movies from that era.”

Q: Why do you focus on menswear?

“Last year at SCAD, I decided to focus more on it because I get more shine with my menswear and I enjoy doing it more. My menswear has been featured in Neiman Marcus; I won a competition in Atlanta with the National Black Art Festival, two years in a row.”

Q: As a designer, have you considered moving to New York for the fashion industry?

“I want to stay in the South and start my company here so I can open up jobs. Not everybody wants to go to NYC, but a lot of people want to design and do something creative, so why not have something here? I went to SCAD, and there are a lot of people who moved up there after they finished, and a lot of them are still interning. I didn’t go to SCAD to get a master’s and pay all of this money to still be someone’s intern.”

Q: You said you have some experience in teaching?

“I used one of my credits to be a TA and a tutor. One of my professors unfortunately got sick and I was the only person in the school, not even the other professors knew how, to teach the electronic patternmaking using the Gerber AccuMark V9 program. The fashion dean asked me to teach the class while she was sick. I went to SCAD to get an M.F.A to have the option of teaching if I wanted to, so it was more practice. I like helping students. I’ll probably start volunteering at the high school, Charleston County School of the Arts. It’s pretty cool; they have hammocks in the classroom and a fashion department.”

Q: Do you have upcoming plans?

“In a few weeks, I’ll be judging the AATS [African American Textile Society] competition at NC State. It was the organization I used to be president of. When I was president of the AATS, I was the one who got the fashion show to be part of the Pan-Afrikan Festival. It should be fun judging the students’ work and seeing how developed the organization has become over the years.”

Q: Did you enjoy your time at NC State?

“My favorite part about NCSU was having 24-hour access to the [textile] building there. That’s the way I got better. Once you take the safety test, you got a key fob to the building. It was cool, because I think what helped me develop my skills was bugging the teachers and bugging the seniors sewing in the lab. I used to stay in there as late as them just to learn from them. I also liked joining the sorority there, Delta Sigma Theta.”

Q: Do you have any advice for students?

“Take it seriously. I know sometimes when you’re an undergrad; you don’t really take college as serious as you should. You need to learn all you can, especially if you’re in fashion. Listen to what the teachers are showing you, because it’ll help you in the long run, if you were to start your own business.”

OPINION: North Carolina needs to revert back to phase 1 before things get worse

OPINION: There is no honor in American politics