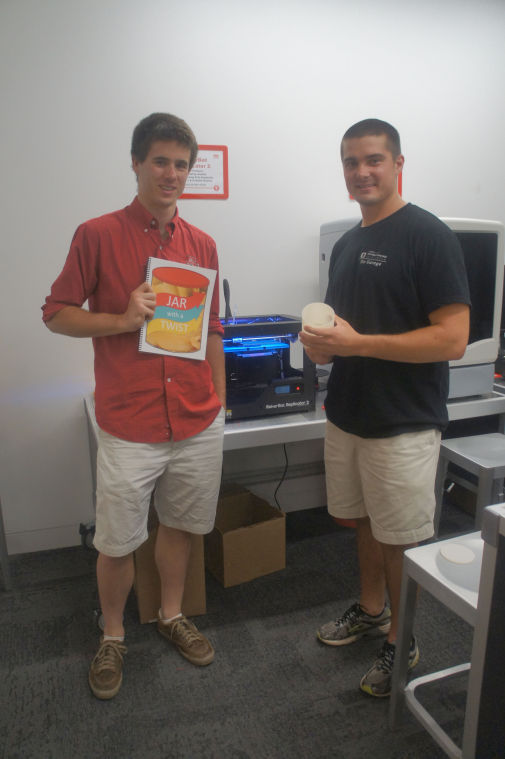 Stephen Smith, left, and Michael Bissette, right, pose with their business model, 3D printer, and model of jar with a twist.

These models show the evolution of the design of Jar with a Twist.

Stephen Smith, left, and Michael Bissette, right, pose with their business model, 3D printer, and model of jar with a twist.

These models show the evolution of the design of Jar with a Twist.

To the huddled masses who are tired of getting pea nut butter stuck on their hands when reaching in for those last few scoops: fret no more. A team of N.C. State Engineering students has de veloped a solution for when you can’t quite reach all the peanut butter in the jar.

The idea behind Jar with a Twist is simple: the jar is essentially an ordinary cy lindrical container. Instead of a fixed bottom, however, Jar with a Twist uses a bot tom that rotates and pushes the jar’s contents up toward the top.

Yes, the idea seems very simple—el ementary, even. So how come no one else has figured it out?

According to Smith and Bissette, many other companies have thought long and hard about the prob lem and come up with solu tions of their own, but many of the ideas were expensive to manufacture or just plain impractical. Bissette says the Jar with a Twist will cost only three cents more to produce than reg ular jars, includ ing the one-cent li censing fee they will charge any com pany who wants to use their product.

That might not seem like a lot of money, but based on a 10-year projec tion of sales, the Bissette has estimated the value of their invention at $7.5 million dol lars per year.

Development for Jar with a Twist all started last Au gust when these four N.C. State engineers met to dis cuss possible ideas for their senior design project. Each team member brought his own idea to the table, and they eventually decided to go with the concept for a “squee gee knife that never gets dirty below the handle”.

“It seemed like a good idea at first,” Bissette said, “but as we dug deeper into the prob lem, we eventually got to the root of it: the real problem was the difficulty of getting food product out of nearly-empty jars.”

After the revelation that they were attacking the wrong problem, the team set out at once to improve the container design for viscous food items like peanut butter.

“Our professors were always telling us ‘it’s not about finding a solution to a problem; it’s about finding a problem that people haven’t solved yet,’” Bissette said. “Sometimes it’s even a prob lem people don’t even know they have. That’s the kind of problem Jar with a Twist is there to solve.”

Before the team could get any real work done on Jar with a Twist, it had to see if its idea was even physically possible.

“A lot of people told us ‘Oh, peanut butter is too viscous to push through a plastic tube cleanly,’” Bissette said. “We decided we needed to see for ourselves.”

The team went to a local hardware store to buy PVC pipe and a makeshift plug to test their concept. Accord ing to Bissette, when they first tried to push the peanut butter through the PVC, ev erything clicked.

Once the team realized its idea was feasible, it set to work improving the proto type design, utilizing campus 3D printers to bring its work to life. The team designed its first official prototype at The Garage, a 2000 square-foot engineering workspace located in the Research IV building on centennial cam pus, and Smith did most of the work on designing the prototypes for the 3D print ing process.

The team has gone through countless designs and thou sands of dollars-worth of 3D-printed design concepts. But the exposure the team has gotten for its work has more than made up for it: Jar with a Twist has been featured on various news outlets includ ing Good Morning America, the Today Show, and Giz modo, an online technology blog. According to Smith, the invention received an unex pected amount of praise and constructive criticism when the team posted a video dem onstrating Jar with a Twist on Reddit.

The finished Jar with a Twist design will have a tamper-proof seal on both the top and the bottom of the jar. When you twist the jar’s bottom, no residue will be left behind from the product in side. That’s because the inner-piece and the cylinder meet to form an air- and-watertight seal—the same basic design principle used in the pistons of a car’s engine.

Despite the simplistic de sign, Bissette and the team believes their idea will go far.

“I think our solution is novel, and gives us a leg-up in the industry.”

The team filed a patent for Jar with a Twist in June. The innovation is currently patent-pending.

For more information on Jar with a Twist, visit www. jarwithatwist.com

Panhellenic Sorority Recruitment 101, Instagram Q&A with Director of Recruitment and VP of Membership

How to report sexual misconduct, resources for students

MLB Pack Pros: Turner beginning to heat up for Washington