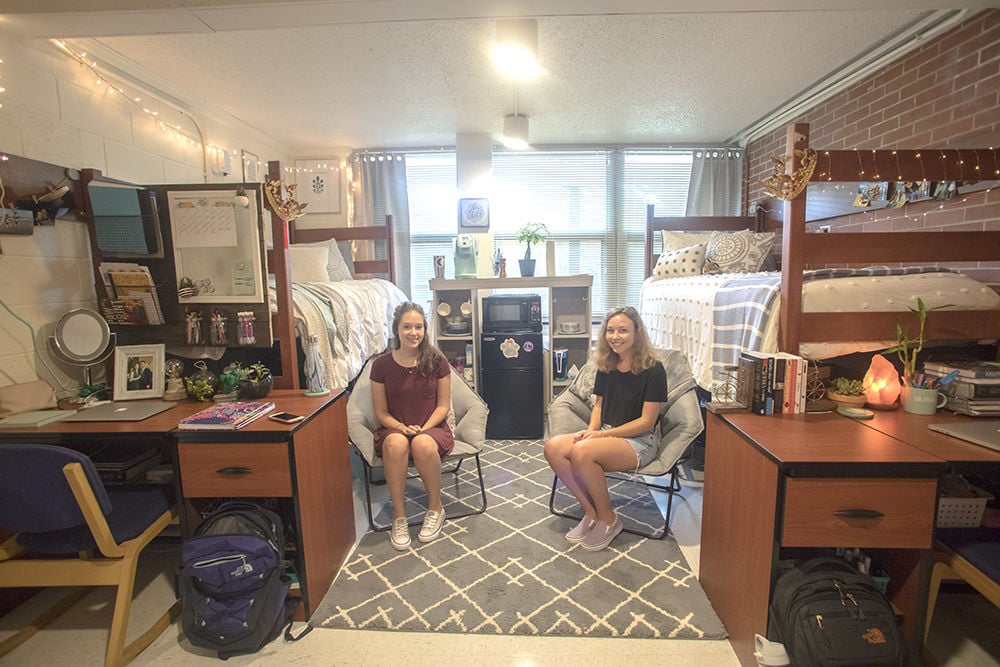 First-years Mackenzie Roach and Alyssa Botkin, studying animal science, show off their trendy room in Bragaw Hall. The two met each other online over the summer and coordinated their room decor through texts and emails. Roach and Botkin won in the Home Sweet Home category in the Wolf Den Design Challenge. 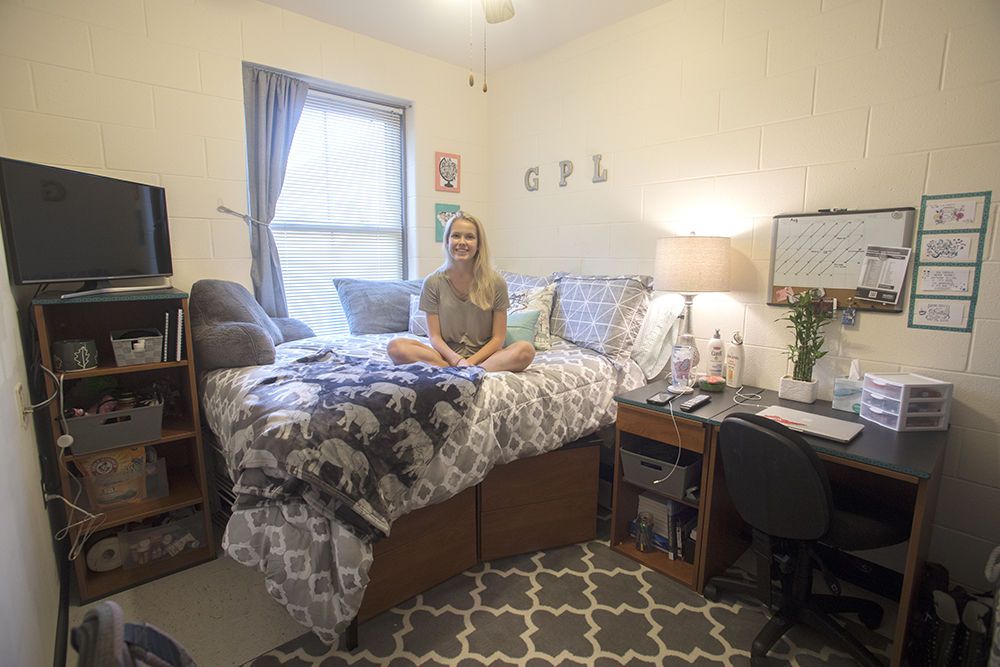 Gabrielle Lewis a second-year studying biological sciences sits in her apartment in Wolf Village on Friday Aug. 25. Lewis was worried that the things she put on the wall wouldn’t come off easily, so she focused on the rest of the decor instead. Lewis won the Wolf Den Design challenge in the Best Apartment category.

First-years Mackenzie Roach and Alyssa Botkin, studying animal science, show off their trendy room in Bragaw Hall. The two met each other online over the summer and coordinated their room decor through texts and emails. Roach and Botkin won in the Home Sweet Home category in the Wolf Den Design Challenge.

Gabrielle Lewis a second-year studying biological sciences sits in her apartment in Wolf Village on Friday Aug. 25. Lewis was worried that the things she put on the wall wouldn’t come off easily, so she focused on the rest of the decor instead. Lewis won the Wolf Den Design challenge in the Best Apartment category.

Every year, University Housing poses a challenge to the Wolfpack students. This challenge demands that contestants be creative, economical and full of school spirit as they decorate their dens.

The 2017 Wolf Den Challenge was split into five distinct categories: Home Sweet Home, #PackSmart17, Wolfpack Spirit, Apartments and Best RA Room. Contestants had roughly one week to perfect their rooms and submit to the contest through an online form or through social media. Once submitted, contests had to attend Packapalooza to find out if their rooms had won one of the categories or the grand prize.

“It was nerve-wracking because we were on the edge of the stage and we didn’t know if we had actually won or not,” said Mackenzie Roach, a first-year studying animal science.

Roach, along with her roommate Alyssa Botkin, did win both the category of Home Sweet Home and the grand prize, which came with gift cards to the campus bookstore, a set of crowns and a set of trophies. Roach and Botkin, also a first-year studying animal science, said that they did not expect to be crowned.

Their room won for the Home Sweet Home category, which called for good room coordination and decor. Amazingly, the pair won the category despite not having known each other until they decided to become roommates. The pair met through the Facebook group, RoomSync, and only met once in person over the summer before living together, so the majority of their room decisions had to happen from afar.

“We couldn't decide on a comforter,” Botkin said. “We kept sending pictures and not deciding so we ended up getting white [laughs].”

The entire room, from the comforters to the furniture, matches a blue-gray color palette. A large part of the room’s design appeal comes from how the two roommates incorporated university furniture with their own. A bookshelf stretches across the back of the room, fitting snugly between the two beds with a perfect cut out for the university-provided microwave and fridge.

Roach said that, while at orientation, she measured the size of the NC State-provided room furniture to help with planning and fitting furniture like the room’s rug and bookshelf.

Another category that required a lot of planning was #PackSmart17, which asked contestants to focus on thriftiness. Toni Contini, the winner of this category and a third-year studying communication, said that her single-room design took a lot of careful placement.

“I always love putting a lot of effort into decorating my room,” Contini said. “I used to actually be an interior design major, so this to me is for fun, but after I saw the finished result and I heard about the contest I said ‘why not.’ It was worth a shot.’”

Contini said she applied for the contest through posting a picture on Facebook.

“I tried to access the form, but for some reason it told me I couldn’t [submit], which actually worked out because I got to share the room with my family and friends,” Contini said. “A lot of them got to comment on it… A lot of them aren’t able to visit me in college so they aren’t able to see how I am living, so that was really neat for them to get to check out a little bit of my space.”

Unbeknownst to her, Contini was actually the only student to submit to the category, something she only found out during the Packapalooza winners announcement.

“They kind of humiliated me [laughs],” Contini said.

Despite the lack of competition, Contini’s room represented elements of the #PackSmart17 category extremely well. Contini used recycled items to create various bits of furniture and decoration in her room.

On one wall, Contini has hung a dresser drawer made out of a heavily polished wood. The drawer face now acts as a shelf for mason jars, which she fills with fresh flowers. Flowers also find homes within recycled mason jars and wine bottles scattered around the room. Contini salvaged the drawer while working for Habitat for Humanity.

With the walls of the same drawer, Contini created small, square boards of smooth wood. She then performed a wood-to-picture transfer to imprint pictures from wax paper onto the wood for decoration.

“The whole inspiration behind my room was to make it my own private little oasis — a home away from home where, at the end of class, I can come back and close the door and it’s the perfect representation of myself and everything I love,” Contini said. “It’s peaceful and settling for me.”

For Daniel Lee, representing what you love through your room is far from a foreign concept. Lee, a first-year studying human biology, won the Wolfpack Spirit category along with his roommate Camden Speight, a first-year studying business administration. The Wolfpack Spirit category called for a room dominated by all things Pack, and Lee and Speight delivered.

“You can’t really look in one direction without seeing something NC State,” Lee said.

“State, state, state,” Lee said. “Our whole line of the family is all NC State graduates. Both sides.”

For parts of the room where a State presence was not evident, the pair covered furniture with stickers; even the room’s trash can is repping a wolf.

“I didn’t really know about it [the contest] until after we moved in,” Speight said. “I did not grow up a State fan so I did not have all the State stuff he [Lee] did, but I had enough.”

Some of the items in the room are more personal and can’t be easily snagged at the campus bookstore. On Lee’s bed is a stuffed Mr. Wuf that can be turned into a football, which Lee has had since he was 15 years old. Hanging on one wall is a framed, yellowing drawing of a wolf that was originally Lee’s great-grandfather’s, and was passed down through generations to him.

Another room customized with personalized art was the room of Best Apartment Winner, Gabrielle Lewis. Lewis, a second-year studying human biology, decorated her room with a series of mandala-style paintings in matching light blue or pink colors.

Most depict elephants, which Lewis said she is “really obsessed with.” Lewis submitted her room for the Best Apartment award through Twitter, after encouragement from her mother.

“My mom saw it [the contest] first and wanted me to do it,” Lewis said. “She was like ‘we spent a lot of time on it’ and she liked the canvases I drew.”

Lewis won a gift card to the campus bookstore, which she said she plans to use to buy a birthday gift for her father.

Go Backstage with the Quadrivium Project

OPINION: NC State, why haven’t you made Election Day a holiday yet?